I think the narrative is already in place. Ã‚Â The Reds prefer to spend money on aging journeymen who are past their primes and are no longer capable of providing any tangible value on the field. Whether or not that is true, the phrase “We got Jack for that” is still probably rolling around in a lot of our heads.

So, without really knowing what I’d find, I started digging around. Ã‚Â In order to try and keep things somewhat scientific, I decided to limit my sample of “bench players” to the 5 players with the most pinch hit plate appearances each season from now back to 2010. I figured this would give me a good chance of estimating what the bench looked like, on average, for the largest part of the season. Ã‚Â I also excluded catchers, since backup catchers are on teams for an entirely different reason that the average bench player, and I excluded players who were meant to be starters. Ã‚Â For example, one season Ryan Ludwick was in the top 5 for pinch hits, but since he wasn’t meant to be a bench piece, I excluded him.

So, here’s a chart showing the aforementioned sample: 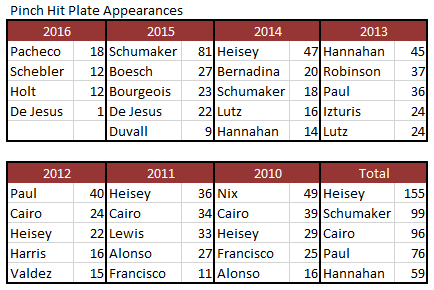 As you can see in 2016, only 4 players have met my criteria of not being a backup catcher or not being a starter. Ã‚Â Nothing ground-breaking here. Ã‚Â Most of you will remember vividly all the fellows on this list.

Attempting to figure out, perhaps, the type of players the Reds target for bench players, I put everyone in a list and looked a few different things. Ã‚Â First, I looked at where these players were before and after their stint on the Reds bench. Ã‚Â The next chart shows precisely that. 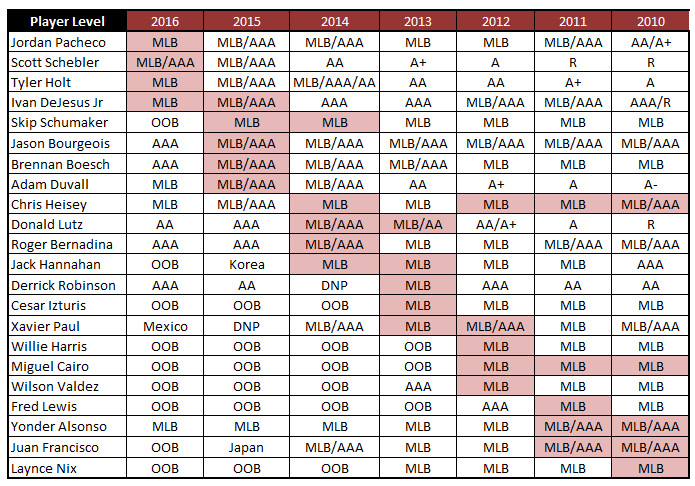 A box being filled red indicates the player was one of the 5 players with the most pinch hit PA that season. Ã‚Â For the most part, this also indicates their seasons with the Reds. Ã‚Â Chris Heisey in 2013 is a notable example to the contrary. Ã‚Â He was with the Reds, but not among the top 5.

After putting this together, the first thing that popped out at me is how many of the Reds bench players the last few years are no longer in professional baseball. Ã‚Â This is indicated by the Out-of-Baseball (OOB) designation. Ã‚Â I think the rest are self-explanatory.

So do the Reds have a slant towards aging, on-their-last-leg journeymen? Ã‚Â Well, that’s been the narrative and it sure seems like it from this first chart.

Now, let’s take a look at each player’s age during the season, as well as the average bench age for each season. Ã‚Â Ages below are as of April 1st. 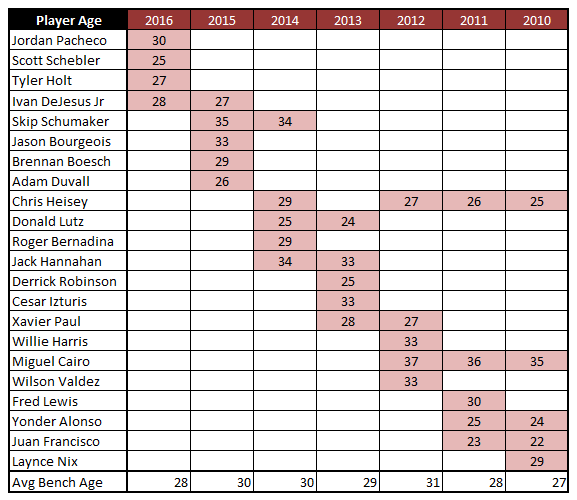 The youngest player the Reds have benched in the last 7 seasons was Juan Francisco. Thanks to him, he drove the average age of the 2010 bench down to 27 years. Ã‚Â The 2012 bench was the oldest thanks to Miguel Cairo.

So, again, there’s not a ton of information to glean from this view. Ã‚Â Perhaps that the Reds prefer veterans to prospects, but that’s not revolutionary.

Now, let’s take a look at how productive these players were during this 7-year span by examining their Wins Above Replacement (fWAR). 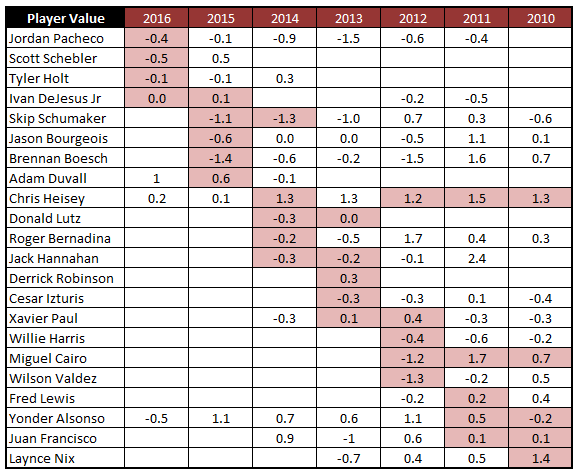 Now we’re getting somewhere! Ã‚Â Note that, again, the boxes filled with red are the seasons where the player appeared as a top 5 bench option for the Reds. Ã‚Â Also, if a box is not filled with a number, it means the player did not play in the majors that season.

There is quite a bit of negative on this chart. Ã‚Â Perhaps we should expect this since bench players are generally not as talented as starters. Ã‚Â If you subscribe to the theory of WAR, however, this is a bad thing. Ã‚Â The theory I’m alluding to is that there is a large supply of replacement players who will play for league-minimum salary that are capable of putting up a 0.0 WAR season; hence the name “replacement level.”

If that theory has an merit, we’d expect there to be as many plus-WAR seasons as negative-WAR seasons. Ã‚Â Actually, we’d expect more since many of these players are probably expected to be better than replacement level, as evidenced by the fact that not all players on this list made league minimum salary.

So if you count everything up, 19 of the 34 player-seasons in our sample were at or above replacement level. Barely over half.

Makes sense, doesn’t it? Ã‚Â A bench player who was bad one year is likely to just be a bad player. Ã‚Â Maybe the Reds got bad luck. Ã‚Â Who knows. Ã‚Â But the fact that the Reds got 11 guys coming off negative WAR seasons and 9 of them did not improve shows a lot about the Reds decision making process. Ã‚Â For those of you who don’t enjoy the “Where’s Waldo?” series, the two players to buck the trend were Adam Duvall and Xavier Paul.

The last thing I wanted to do was classify each player and see if certain types of players have been more successful for the Reds. Ã‚Â The buckets I chose to create are as follows: prospect, career minor leaguer, and journeyman/role player. Ã‚Â The distinction on the last bucket is that a journeyman is generally older and more expensive, and a role player is a guy like Chris Heisey who at some point was no longer a “prospect” but was clear in his role as a bench player. As such, I bucketed Heisey’s 2010 and 2011 in as “prospect” and his 2012 and 2014 as “role player,” which is bucketed with journeyman. Ã‚Â Here is that chart: 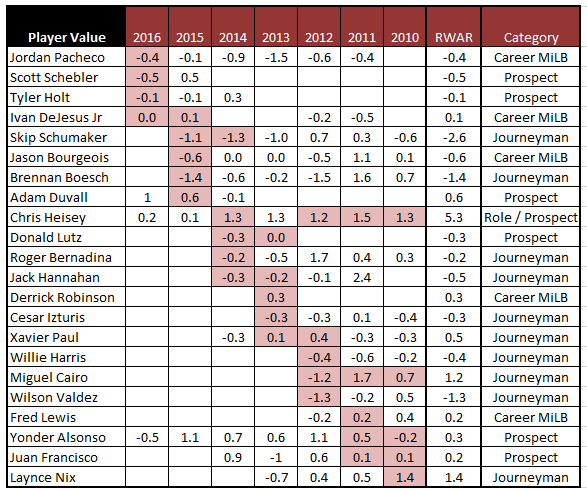 I added an “RWAR” column showing the red boxes added up, and also showed how I bucketed each player.

So, here’s the final chart: 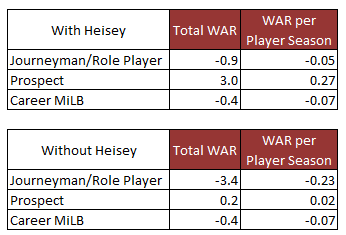 I felt the need to present the data with and without Heisey, since he’s been by far the best bench player the Reds have employed over the last 7 seasons. Ã‚Â He also received the most overall playing time, which adds to his WAR totals.

We can see, even from this tiny and likely irrelevant sample, that the Reds are not doing themselves any favors by rostering these “journeyman” types of players like Schumaker and Hannahan. Ã‚Â  Not only have the Reds been unable to identify good journeyman, they have to pay them way more than league minimum.

So, in conclusion, I don’t think we’ve discovered much here today, but I thought it was fun to look at something like this anyways! Ã‚Â I’m encouraged by the fact that the Reds didn’t waste any money on journeymen this season. Ã‚Â I hope it continues until 2018 when the Reds hope to compete again! Ã‚Â They should certainly be able to find useful bench pieces from within their own, cost-controlled stable of players.