With tonight’s loss, the Reds are owners (proud?) of a 10-game losing streak. Ã‚Â Veteran lefty Scott Kazmir out-pitched (?) Dan Straily to the tune of 1 ER and 12 K in 6.0 IP.Ã‚Â  Straily wasn’t bad himself, going 7 innings and striking out a season-high 11 while only issuing 1 walk.Ã‚Â  The two teams combined to record 27 of the 51 outs via strike out.

THE GOOD
-Dan Straily had his best outing as a Red, striking out 11 and walking only 1 in 7 IP.Ã‚Â  This is the 2nd time in his career he’s reached double-digit Ks, the other time being in 2013 with Oakland when he also struck out 11. Straily got into trouble in the 4th, loading the bases with 1 out on a single, HBP, and walk.Ã‚Â  A 2-run single from Joc Pederson was the damage.Ã‚Â  The next inning he gave up a solo jack to Yasmani Grandal.

-Brandon Phillips had a pair of hits and a walk in front of his son.Ã‚Â  I’m sure his son has watched him play before, but it was neat to see the family connection on the TV.

THE BAD
-The Reds offense.Ã‚Â  They have scored a run in only 2 of their last 32 innings played.

-Reds third base coach Billy Hatcher exhorted Jay Bruce to try for an inside-the-park home run on a triple in the 4th inning.Ã‚Â  Bruce was thrown out because of course he was.Ã‚Â  So instead of two chances to get a runner home from 3rd, the Reds got zero chances.Ã‚Â  The play scored Phillips, and with the offense struggling so mightily, maybe a 2nd run on the board was a carrot too sweet for Hatcher to ignore.

-Eugenio Suarez. He’s playing very poorly in the field, which has been par-for-the-course so far in his Reds career.Ã‚Â  After a decent start to the season at the plate, he’s hasn’t been hitting at all lately.Ã‚Â  If he can’t produce around a 110 wRC+ level, he’s likely not the Reds answer at 3rd base long-term.Ã‚Â Ã‚Â  All hope isn’t lost, though, as Suarez still has decent batted ball peripherals and a BABIP that should come up a bit.Ã‚Â  Below is an illustration of what’s been happening to Suarez lately… 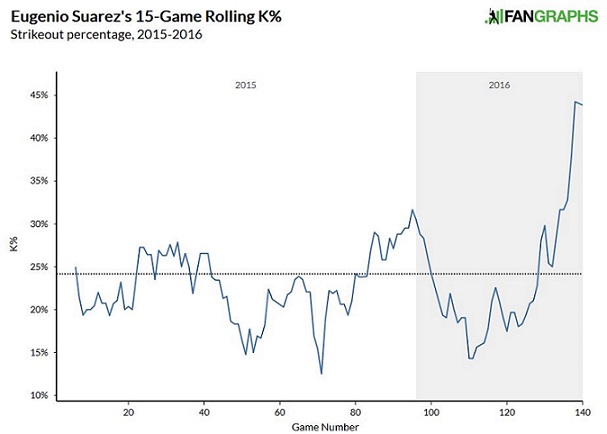 VIN SCULLY QUOTES
“At least somebody hit something!” -In reference to BP giving his son a high five

“Eugenio Suarez, who has the bad habit of striking out a lot.” -As Suarez comes to bat

“Puig swings at the first pitch.Ã‚Â  Stop the presses.”

COMPLETELY RANDOM THOUGHTS
-On June 22nd, you can get a Dusty Baker bobblehead at Dodger Stadium.

-With Scully retiring at the end of the year and not traveling with the team, this was the last game he’ll ever call against the Reds.Ã‚Â  Hope you guys all got a chance to listen.

-With the way this season is going, the Reds need to start trying things that might help out in the future.Ã‚Â  Foremost among these things would be attempting to see what Adam Duvall looks like at third base.

-I’m going to the game in Colorado on Memorial Day.Ã‚Â  I hope the losing streak is over by that time.

THE NEXT GAME
The Reds have an off-day on Thursday before starting a 3-game series in Milwaukee. They always seem to hit well in Milwaukee, so maybe the bats will wake up under the vigilant gaze of Bernie Brewer.