Before this season began, most Reds fans didn’t have a clue who Tim Adleman was. But with injury after injury to the starting rotation, the 28-year-old made his way toÃ‚Â the majors after a long journey to get there (and now finds himself on the disabled list because that’s just how the year is going).

He’s been more than a simple spot starter, though, and has more than held his own in his four starts. Let’s break those outings down.

Adleman is a classic feel-good, underdog story. He was drafted out of Georgetown University by the Baltimore Orioles in the 23rd round in 2010 but quickly found himself out of professional baseball when he was released before the 2012 season. Not ready to give up on his baseball dream, the right-hander spent the next two years playing inÃ‚Â independent leagues. While there, a Reds scout took notice of Adleman and he was signed to a minor-league contract before the 2014 season.Ã‚Â After initial struggles in High-A Bakersfield, he thrived in Double-A Pensacola while pitching mostly out of the bullpen, posting a 2.85 ERA and 3.43 FIP to go along above average strikeout (22.0 K%) and walk (6.4 BB%) rates.

A move to the rotation in 2015 saw his strikeout and walk numbersÃ‚Â get slightly worse, but he continued to throw the ball well overall, proving to be one of the Blue Wahoos’ most reliable starters and earning a trip to the Southern League All-Star Game. As a result, he got bumped up to Triple-A Louisville to start the 2016 campaign and put up even better numbers (minus his ERA). But his stay there didn’t last long, as Raisel Iglesias’ shoulder impingement created another opening in the Cincinnati rotation.

For a pitcher who had only three starts at the Triple-A level and was making his major-league debut at age 28, the expectations weren’t all that high for Adleman, but suffice itÃ‚Â to say he has exceeded them. His first start was his best, tossing six innings of two-run, three-hit baseball. He hasn’t gone that deep into a game in his other three starts, but he’s allowed no more than three runs in any outing, while giving up 18 hits in 19 1/3 innings and keeping his strikeout rate even with his minor-league percentages.Ã‚Â If there’s one qualm to be had with his performance, it’s the walks. He’s issued nine bases on balls, putting his walk rate at an ugly 10.8 percent.

As luck would have it, he left his most recent start with a strained left oblique. While he’s sidelined for the moment, there’s a good chance he’s shown the organization enough to stick around when he’s ready to return, whether in a starting or relief role.

What he does well

For his minor-league career, he walked 7.6 percent of the batters he faced, a very respectable number. His BB% through his first four big-league starts leaves something to be desired, but considering his career rates, that number should come down over time.

Without overpowering stuff, command of the strike zone and initiating weak contact is key. Adleman has been able to do just that, as his line-drive rate (14.8 percent) and hard-contact rate (28.1 percent) are below league average. He has been able to do this by finding success in keeping the ball down in the zone, as seen in the heat map below: 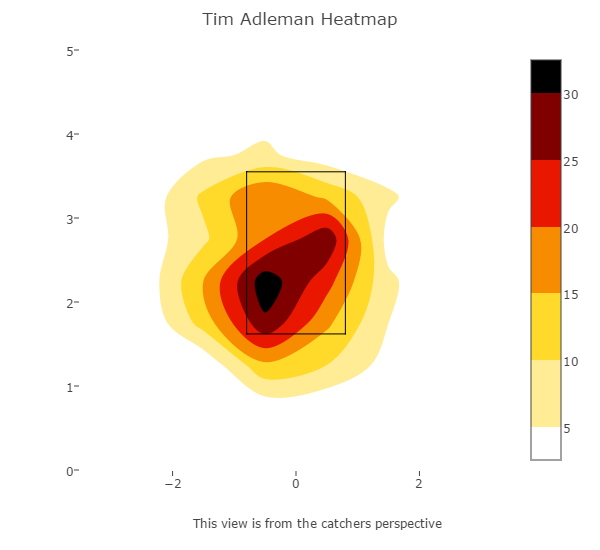 The red area near the top of the zone comes largely from his fastball, which is where he seems to like to throw the pitch. As the strike zone has gotten increasingly lower in past years, elevating pitches has been a growing trend with some pitchers in baseball, as CBS Sports’ Jonah Keri pointed outÃ‚Â in anÃ‚Â interesting article that is definitely worth a read. Adleman could very well be one of those guys when it comes to the fastball.

Here’s a look at Adleman’s heat map on his four-seamer, which — in terms of results — has been his best pitch through four outings: 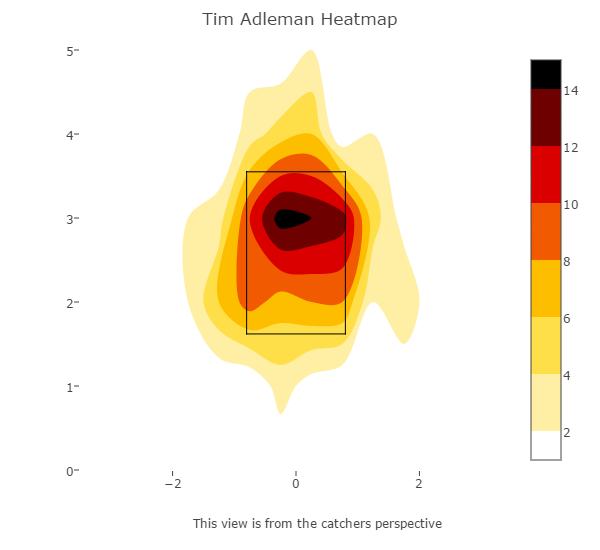 From a velocity standpoint, the righty is rock solid, with his four-seamer topping out on the radar gun at 94.6 mph, while averaging 91.5. He throws it about 42 percent of the time and hitters are batting a measly .095/.208/.095 against it, though those numbers are bound to come up due toÃ‚Â aÃ‚Â .133 batting average on balls in play. For a heater, it has gotten an unusually high amount of swings and misses, with a whiff rate of 10.9 percent. Per the most updated data (provided by Fangraphs writer Eno Sarris in Feb. 2014), the league average swinging-strike rate on a four-seam fastball is 6.9 percent, putting Adleman’s rate well above the norm to this point.

The changeup and curveball are decent off-speed pitches for the right-hander, but both have below average swinging strike rates, with the change sitting at 12.2 percent and curve at 7.7 percent. However, those are respectable results that he’s been able to work with, holding hitters to a .263 average on the change and a .273 mark on the curve. He also generates ground balls at an efficient rate with both pitches — 62.3 percent with the curve and 56.3 percent with the change.

Where he can improve

In terms of his pitches, where Adleman hasÃ‚Â really run into trouble is with the two-seamer. At 21 percent, he uses it frequently but has had less than ideal results. Hitters have a line of .467/.529/.667 on it and have whiffed on it at a mere 4.4 percent of their swings.

With his command being shaky at times in his first four starts, home runs have also hurt him. Of the eight runs he’s allowed, four have come via the long ball. He’s been more of a ground-ball pitcher in his career, but when a pitch misses its spot, especially in Great American Ball Park, it has an elevated chance of finding the seats.

Pitch efficiency, as it has been for every other Reds starter this year, has also been an issue. His longest outing was his major-league debut, at six innings. He reached 101 pitches after five innings in his second start and was pulled after a big fifth inning in his third outing. Before leaving the game in his last start,Ã‚Â he was at 74 pitches in the fourth inning.

Already 28 years old, Adleman isn’t going to be a long-term solution in the rotation, but he’s proving he could be a viable option in the bullpen once everyone isÃ‚Â healthy. He has showed an ability to throw strikes throughout his career andÃ‚Â given the current state of the Cincinnati relief corps, that’s a huge positive right off the bat. While he doesn’t have an electricÃ‚Â repertoire to blow hitters away, he’s still putting up decent strikeout numbersÃ‚Â and has a fastball that can reach the mid-90s. In a bullpen role, he might even be able to ramp up his average velocity when throwing decreased innings. A guy like Adleman is always useful to have on the roster, as he could also make a spot start in an emergency situation or provide mop-up innings if a starter leaves the game early.