A couple nights ago I watched David Gelb’s documentaryÃ‚Â Jiro Dreams of Sushi. In it, Gelb details the life and legacy of Jiro Ono,Ã‚Â a Japanese sushi chef who isÃ‚Â the oldest chef and firstÃ‚Â sushi chef to win three Michelin stars. JiroÃ‚Â strives for perfection in his work and will not retire until he has hit that mark (nowadays, Jiro is 90 and still works the restaurant). But don’t take my word for it. In the film, Jiro says:

I do the same thing over and over, improving bit by bit. There is always a yearning to achieve more. I’ll continue to climb, trying to reach the top, but no one knows where the top is.

At this point, had you not read the title, you would probably believe that this post was about Joey Votto and his quest to become the perfect batsman. After all, Votto did once say:

I needed to unlock some of my potential. Basically, it was just about learning from the coaches and getting better against left-handers. I still feel I am improving each and every day.

There’s a moment in the film when, after it has beenÃ‚Â explained by Jiro’s son, the employees of Sukiyabashi Jiro stand according to their position in the kitchen hierarchy. 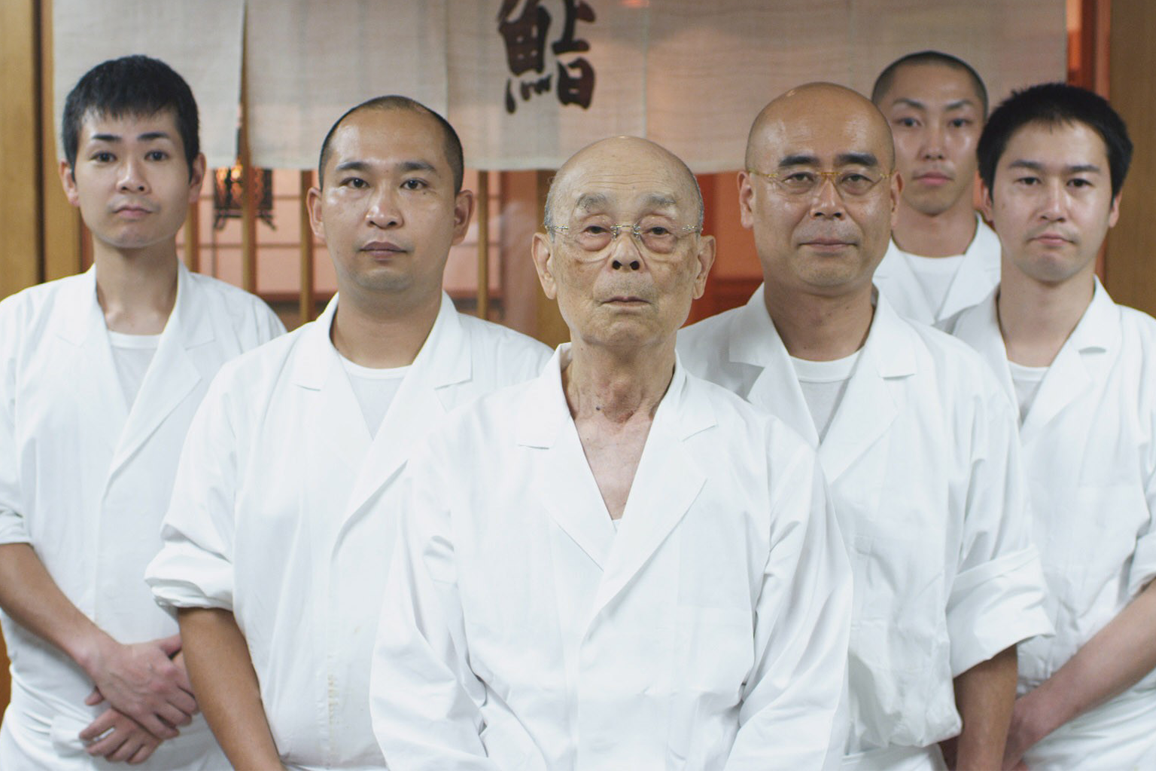 At front is Jiro; to his left is his son, Yoshikazu; to his right is the senior apprentice; at the wings are the two junior apprentices; and in the way back is the guy I’m going to call the intern. In the explanation of who does what in the kitchen, the intern isn’t even mentioned. He might be one of the workers that only stays for one day before bolting out the door. He might be the most important cog. But the intern isn’t even featured on the DVD case cover, so I doubt it’s the latter. 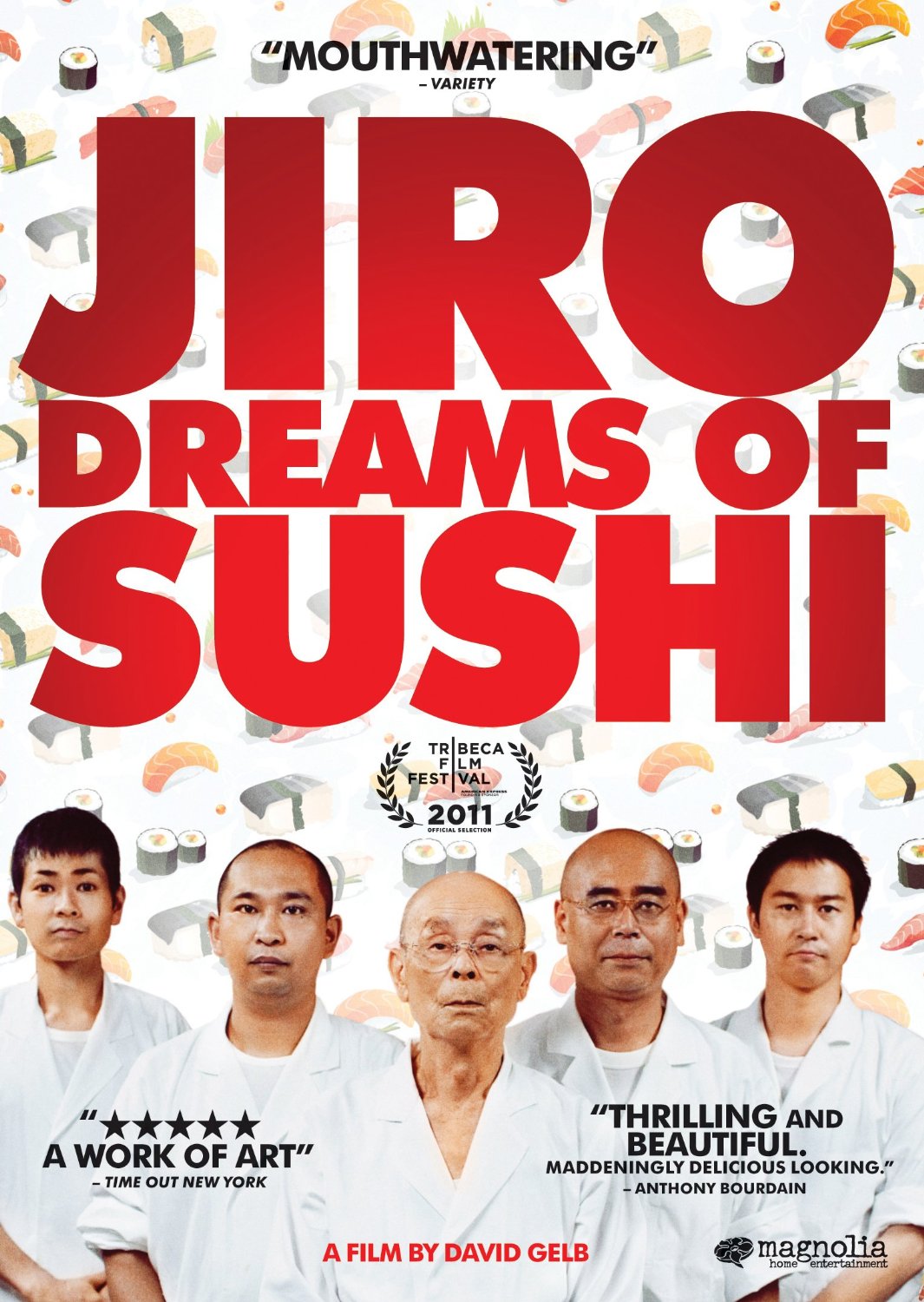 Tucker Barnhart is the intern.

You see, as JiroÃ‚Â readily admits to, everyone behind himÃ‚Â in the triangle does 95 percent of the work, but Jiro gets all the glory. It’s a bit like a pyramid scheme in that way. Tucker Barnhart is the intern because–oh-so-quitely, even invisibly–Tucker has been doing all the work that Joey Votto hasn’t done during his slump and Devin Mesoraco hasn’t done with his injury.

Nominally, Tucker has cooled off a bit in May–his slash line is down to .279/.329/.426–but with an OPS of .755, Tucker is really producing just as much. Take Wednesday night when he drilled a double and a triple or Tuesday night when he launched his first home run of the year. Tucker might not be hitting as often in May, but he’s hitting more efficiently.

So what brought about this change? Tucker is a career .247/.313/.332 hitter, a line whichÃ‚Â leaves a lot to be desired, and has almost equaled his WAR from last season in just a quarter of the time.

To continue the metaphor of this post,Ã‚Â a large part of Jiro’s process is only buying the best ingredients from the vendors he trusts. Putting that in a Tucker context, the ingredients that Tucker is using so far this season are not only the best, but once in a lifetime finds. Tucker’s hard hit ball percentage has skyrocketed this season, from 18.3 percent in 274 plate appearances last season to 38.2 percent in 73 PAs this season. Also, Tucker’s BABIP sits at a completely unsustainable .333, meaning what he’s cooking won’t last the way it has all season long.

Finally, small sample size is playing an effect. The reason Jiro’s restaurant won three Michelin stars is because the testers deemed his sushi to be just as good every time they went. It’s easy to make a perfect piece of sushi two, three, four times in a row, but try doing it every time over the course of 40 years. Right now, Tucker has hit perfection (I use perfection in a very limited sense of the word) three or four times in a row thanks to a little bit of luck and little bit of skill. But it won’t last over the course of the season.

Just look at Tucker’s Contact Percentage for the season. 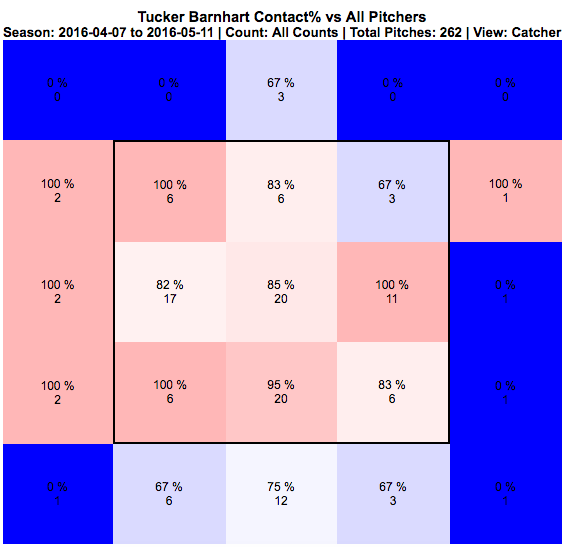 Pretty much anything in the zone, Tucker is putting a bat on in some way, shape, or form, but he’s only seen 262 pitches, with just 105 of those actually in the strike zone. Coupled with his BABIP, and you understand pretty quickly why he’s having such a good year.

But not everythingÃ‚Â can be just dismissed with the explanation luck. Tucker is hitting for more power this year (ISO of .147 to last year’s .074) and has had a lot of success against sliders and changeups (wSL/C of 6.31 and wCH/C of 6.43), both pitches which have given him trouble in the past (2015 wSL/C of -1.51 and wCH/C of -0.48) Those numbers could be dismissed with small sample size however.

In the end, the takeaway becomes: Enjoy this Tucker while you can and hope like hell he keeps it up. Barnhart finally has his time in the spotlight and has made the most of it so far, but nothing in the numbers wants to say its sustainable. But Tucker’s all we got. With Devin likely out for the year, the intern has become the senior apprentice all the sudden, and now 95 percent of perfection is being done by a man with a career OPS well below .700.

If Jiro dreams of sushi and Joey dreams of his wallet, then Tucker Barnhart must dream of consistency because without that, the Reds catching situation begins to resemble the bullpen a bit more closely than anyone wants to admit.