With Cody Reed and Brandon Finnegan being regarded by many as the crown-jewel returns of the Johnny Cueto trade for the Reds, the third left-hander involved in the return, John Lamb, has become somewhat of an afterthought for some. His stuff isn’t as flashy as that of the other two southpaws, but in his limited time as a big leaguer, he’s shown he belongs, and could become a solid middle-of-the-rotation piece down the road.

Four years after having Tommy John surgery that knocked him from top prospect to forgotten man, Lamb made his big-league debut last AugustÃ‚Â after being traded to Cincinnati from the Kansas City Royals in July. On the surface, it appeared his first taste of the senior circuit didn’t go very well. The southpaw’s ERA was inflated like a balloon and he gave up home runs at an alarming rate of 1.45 per nine innings. But a closer look shows he was much better than the basic numbers showed.

As seen in the table above, every ERA estimator indicated that Lamb was undeserving of the results he got. Why was this the case? Firstly, he racked up strikeouts at a rate than he hadn’t since before his elbow surgery and ranked among the league leaders in K% from the time of his call-up onward. He also suffered from an unusually high home-run-to-fly-ball ratio, giving up a long ball on 14.3 percent of the balls hit into the air. That was undoubtedly elevated by making six of his 10 starts in Great American Ball Park and was a mark well, well above league average, which is why his xFIP and SIERA were so low relative to his ERA.

On top of that, luck was not on his side, either. Among all 377 pitchers — both starters and relievers — who gave up at least 100 batted balls, Lamb’s average exit velocity of 85.6 mph was 14th-best, just a tick aboveÃ‚Â Clayton Kershaw (85.3 mph) and Jake Arrieta (85.0 mph). Of the 202 starting pitchers who threw at least 40 innings in 2015, only seven had a lower hard-contact percentage than Lamb (23.4%). Yet, the batting average on balls in play against the Reds rookie was a robust .367, the second highest of all the pitchers in that same group, and considerablyÃ‚Â higher than the .296 major-league average.

Through his first two starts in 2016, it’s been the opposite case for Lamb: his ERA is low, but the underlying numbers suggest he hasn’t pitched all that well. His velocity has been down by about two miles per hour from what it was last year — potentially the result of his December back surgery and delayed start to the season — resulting in fewer strikeouts, more walks and harder contact against him (a whopping 40.0 Hard%). However, he’s been the beneficiary of good luck, holding hitters toÃ‚Â a .241 BABIP.

Lamb is a textbook example of how important it is for a pitcher to mix up pitch speeds. Per his Fangraphs profile, the 15 mph difference between his four-seam fastball and changeup is the biggestÃ‚Â in the game. His big, looping curveball has been among the slowest in all of baseball, creating further deception in his repertoire.

While it’d be a stretch to call his four-seam fastball anything but mediocre, the lefty’s other three pitches have proven to be very effective in his short time on a big-league mound. In addition to the change and curve, he throws a cutter with which he had a lot of success during his rookie year. All three were extremely good swing-and-miss pitches: 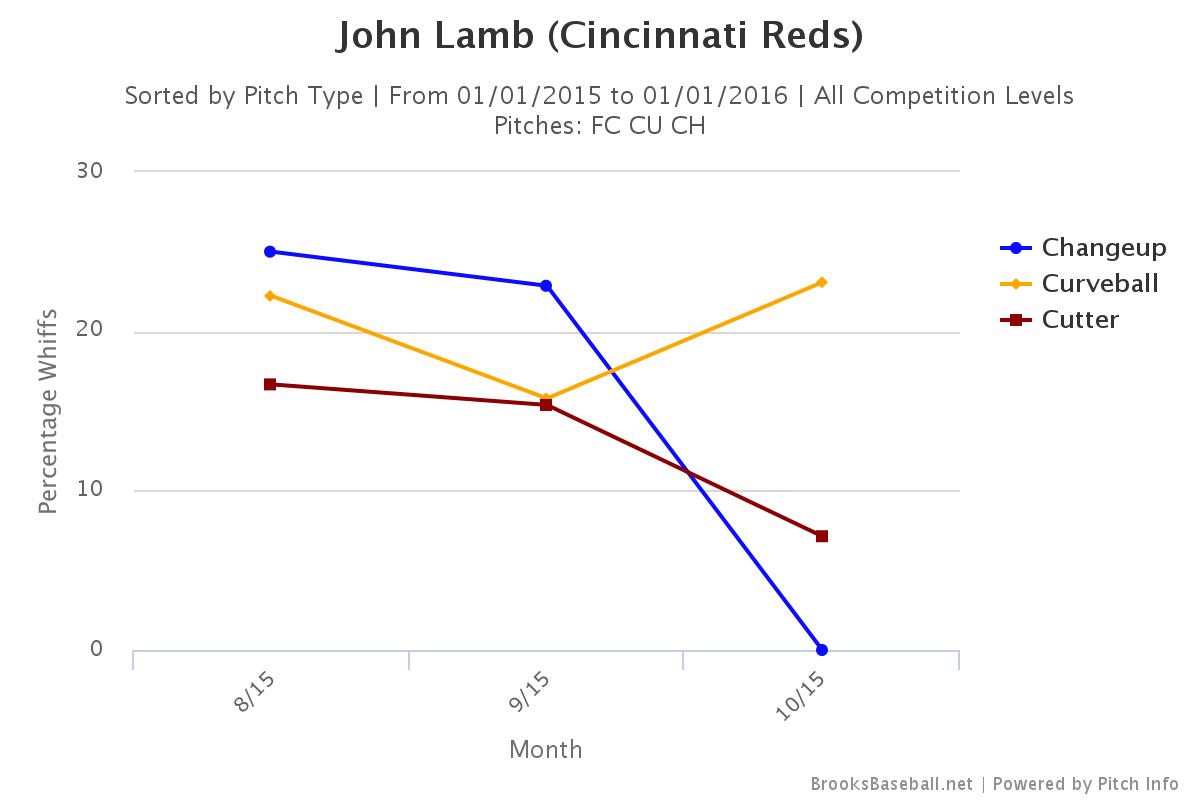 When he’s on top of his game, the best pitch for Lamb is his changeup, which can very much be considered a plus offering. Lamb has great feel and control of the pitch, doing a great job of selling it as a fastball. With such a stark difference in speed between the two pitches, the change has paid big dividends. Per Statcast, it had an average spin rate of 1,538 mph in 2015, below the league average of 1,730 (a good thing). This led to a good amount of downward movement on the pitchÃ‚Â and a resultingÃ‚Â whiff rate of 22.7 percent. That’s ridiculously good. The swings and misses have dropped to 17.9 percent through two 2016 starts, but that’s still more than a healthy rate. When batters have put it in play, they’ve hit a mere .220/.231/.520.

The curveball also gets a high level of swings and misses for Lamb, as hitters are likely just as fooled by its incredibly low speed (69.2 mph average) as they are by its movement. It’s his least thrown pitch, but he knows when to use it, as he gotÃ‚Â whiff rate of 19.2 percent last year and has seen that jump to 20.0 percent this year. It has also, unsurprisingly, been his best weapon to get a ground ball with, generating a 63.2 GB% in 2015 as hitters could only muster a .238/.273/.286 line on it.

In his rookie campaign, his cutter was his best fastball, with yet another above-average whiff rate of 14.3 percent. It’s another pitch that can deceive hitters because it looks like he throws it harder than he really does. Being 6-foot-4 and having a long stride means his release point is closer to home plate, causing theÃ‚Â perceived velocity on his cutter to be nearly one mph faster than it is in reality. When batters were able to connect on it, the cutter proved to be Lamb’s second-best ground-ball pitch (56.7 GB%).

One of the No. 1 areas where Lamb could stand to improve is command. While his 8.6 BB% last year wasn’t terrible, it wasn’t great either. Through two starts this year, his control has been worse, sporting a walk rate that’s approaching 10 percent. That will get him in trouble if he doesn’t bring that number down. Of course, it’s two measly starts — hardly anything to get worked up over — but it’s something to watch.

As successful as he’s been with the other three pitches in his arsenal, his four-seam fastball has been incredibly hittable, which was an issue last season when he threw it 55 percent of the time. Like his cutter, the perceived velocity on his heater was over one mph faster than the actual velocity,Ã‚Â which seems to be encouraging, but it didn’t help all that much.Ã‚Â With a whiff rate of just 4.4 percent, batters hit .348/.459/.576 against it, including five of the eight total home runs he allowed. Lamb’s struggles with the pitch can be attributed to him simply not throwing it that hard, averaging only 91.4 mph, or locating it well. In his first two starts this year, he’s gotten more swings and misses on the pitch despite a dip in velocity to 89.7 mph (perhaps a result of throwing it less?), but it’s too early to determine any real trends.

While his four-seamer has had better returns this year, the cutter has taken a turn for the worst. As he has thrown it more this year (it’s his most-used pitch right now), hitters seem to have figured it out, and have whiffed a total of one time. He’s having a much more difficult time locating the pitch, having thrown it for a ball more often than he’s thrown it for a strike. As you can see in the heatmap, the cutterÃ‚Â has been all over the place (last season is on the left, this season is on the right):

Again, it’s too early to read too much into Lamb’s 2016 numbers, and it’s probably fair to assume his command will get better the more he pitches. That said, it’s still something to keep an eye on moving forward.

It should be fascinating to see how Lamb’s career pans out with the Reds. He has shown he has the stuff to be a key cog in the starting rotation, but will the intense competition of young pitchers eventually force him to the bullpen? Only time will tell. Aside from his ERA, his numbers have gone in the wrong direction across the board through his first two starts this year, but an impressive rookie-year performance should leave the team and fans feeling good about his future. His health will be key, especially at the moment,Ã‚Â while so many other starters are on the shelf with injuries. Now is his time to make a mark and ensure the Reds don’t have any other choice but to leave him in the rotation. If he ever does get moved to the bullpen, he has the arsenal to be an effective reliever, especially if he can start missing bats with regularity again.