The Reds hit three solo home runs in route to a 3-2 win on Monday night against the Pirates. Dan Straily gave the Reds his third consecutive quality start. Most importantly, the Reds bullpen pitched three scoreless innings in the win. The Pirates got a runner to third base with 1 out in the 9th inning, but Tony Cingrani worked around it to secure the Reds victory. 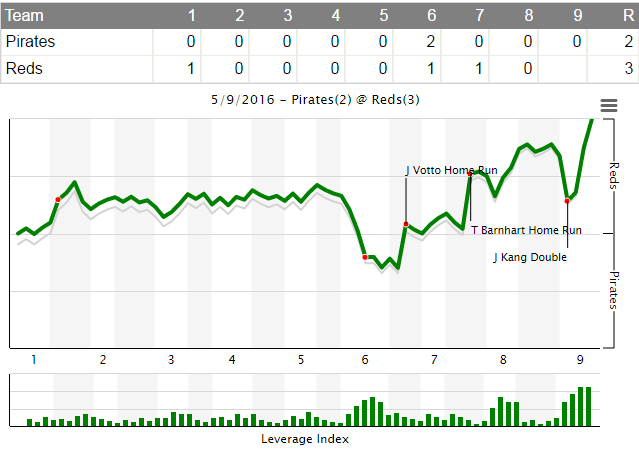 According to FangraphsÃ‚Â WPA statisticÃ‚Â (winning percentage added), the most important play of the game wasÃ‚Â Tucker Barnhart’s solo home run with 2 outs in the 7th inning, giving the Reds a 3-2 lead.Ã‚Â That play increased the Reds chances of winning by 24.0% (from 52.1% to 76.1%)

Dan StrailyÃ‚Â continues to do a really nice job in the Reds rotation. He threw his third consecutive quality start tonight. He now has a 3.47 ERA through 5 starts.

Zack CozartÃ‚Â hit his 4th home run of the season to lead off the game. Cozart has been so much fun to watch so far this season. Cozart also made an incredible play in the 8th inning, that really helped Blake Wood get out of the inning.

Joey VottoÃ‚Â hit his 5th home run of the season, which tied the game up in the 6th inning. It was mentioned on the broadcast, but Votto is really starting to hit the ball hard. I don’t want to jinx it, but it really feels like Votto is on the verge of going on a month long baseball killing spree.

Billy HamiltonÃ‚Â had 3 hits! Yes, 3 hits! He was thrown out on his only SB attempt, but HE HAD THREE HITS!

Brandon PhillipsÃ‚Â made a really nice back-handed play with 1 out in the 9th, and a runner on 3rd base (who would have been the tying run).

Nothing to see here tonight.

A big play in the game came in the 8th inning.Ã‚Â Blake WoodÃ‚Â walked the first batter in the inning, Andrew McCutchen. He then got behind 3-0 to Gregory Polanco, but Polanco was given the green light, and he flied out. It was a strange move to swing 3-0 on a guy who is struggling to throw strikes, but it really benefited the Reds.

Jim DayÃ‚Â did the play by play for the Reds tonight. He wasn’t great by any means, but the nice thing was that he just called the game for the most part, and didn’t interject negativity all over the broadcast. That is refreshing.

I’ve seen a lot said about theÃ‚Â Reds low attendanceÃ‚Â numbers. The Reds not being good certainly has a lot to do with that, but also the numbers were up last year because of the All-Star Game. People only got season tickets so they could go to the big game. I wouldn’t worry too much about the ticket revenue. The Reds get a lot of other money through areas other than ticket sales. And if your worried about the fans losing interest in the team permanently, I wouldn’t worry too much. The fans will come back when this team has a winner again. I remember attending a game in 2009 for $10, and I sat right behind home plate.

Feature photo used courtesy of the Cincinnati Enquirer and Sam Greene, and is used byÃ‚Â permission.Ã‚Â