John Lamb was cruising through four innings. He allowed a home run in the first inning, but had retired 9 of the last 10 batters he had faced. Lamb however had to leave the game in the 5th inning with a sprained left thumb. It’s just another injury this season to a Reds starting pitcher.

The Reds offense got rolling in the third inning, and it came from unlikely sources. The first two runs were produced from a Ramon Cabrera walk, a Tyler Holt triple, and an Ivan De Jesus Jr. double. The Reds then got a third run on a Joey Votto single.

The Reds bullpen blew a 4-1 lead, but it wasn’t just one guy…..it was a true team effort. Three Reds relievers each gave up at least one run (Delabar, Wood, and Ohlendorf).

The Reds offense couldn’t get anything going the rest of the game. The game ended with Billy Hamilton (who pinch ran) getting thrown out trying to steal second base. The Reds challenged, but the call stood. 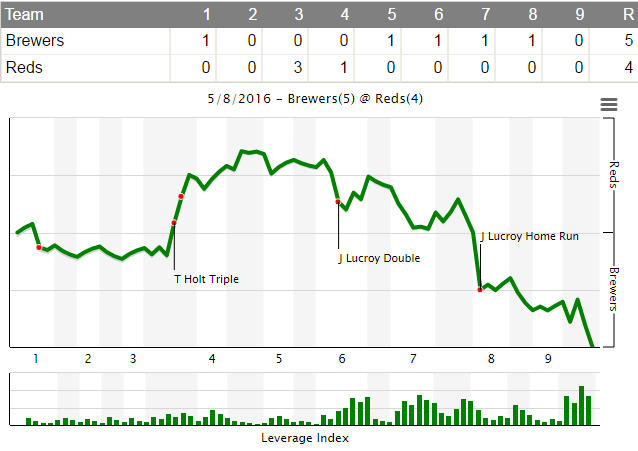 According to FangraphsÃ‚Â WPA statisticÃ‚Â (winning percentage added), the most important play of the game wasÃ‚Â Ross Ohlendorf allowing a solo home run to Jonathan Lucroy to lead off the 8th inning, giving the Brewers a 5-4 lead.Ã‚Â That play decreased the Reds chances of winning by 25.0% (from 50.0% to 25.0%)

John LambÃ‚Â looked very good when he was on the mound today. After he allowed a first inning home run, he was locked in. He retired 9 of the last 10 batters he faced. His line on the day: 4.0 IP, 2 H, 1 ER, 1 BB, 3 K. Lamb has a 1.80 ERA on the season. Let’s hope that he won’t have to miss any time. The official diagnosis is a strained left thumb, and he is listed as day-to-day.

Adam DuvallÃ‚Â hit his 6th home run of the season. After a slow start for Duvall, he is starting to look like a decent everyday player. Duvall has an .849 OPS on the season. His 5 BB to 31 K leaves some to be desired.

Ramon CabreraÃ‚Â had two walks and a hit this afternoon.

Steve DelabarÃ‚Â does have nice upside for the Reds in the pen, but he struggled in his second appearance with the Reds this afternoon. He gave up 3 hits, including a home run in 1.2 innings.

Blake WoodÃ‚Â walked the first two batters he faced in the 7th inning, and allowed the Brewers to tie the game despite not giving up a hit in the inning. Something, something….walks will haunt. 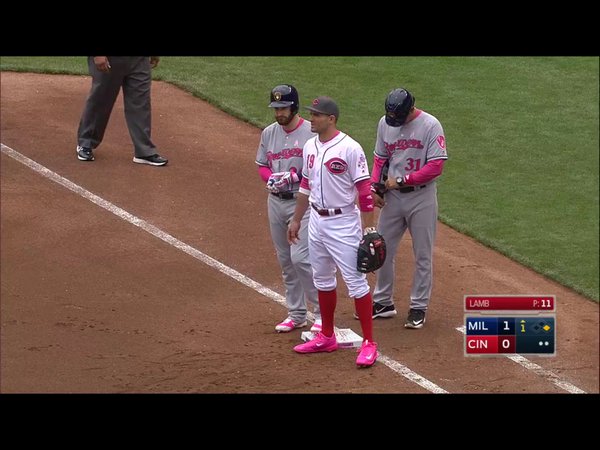 I loved the Reds Mother’s Day uniforms. The hats were especially cool. It was pointed out to me on Twitter that Joey Votto had red socks on with the pink uniforms. That was disappointing. Lamb rocked it best, as he had pink long socks with the uniform.

Cody ReedÃ‚Â continues to absolutely dominate at AAA. Last night, Reed allowed just 1 run in 8.0 innings (8.0 IP, 6 H, 1 R, 0 BB, 8 K). He has a 1.46 ERA through 4 starts, with 25 strikeouts and just 5 walks. With the success that Finnegan and Lamb have had at the big league level so far in 2016, it’s pretty safe to say the Reds did very well when they traded two months of Cueto for these three guys.

I hope you all aren’t too disappointed in me, but today’s titanic struggle didn’t have my full attention. I also enjoyed watching my Cavaliers finish off a four game sweep of the Hawks. Things are getting pretty exciting up here in Cleveland. Game 1 of the Eastern Conference Finals will be next Tuesday night in Cleveland, and the Reds will be playing at the same time next door at Progressive Field.