MLB strength of schedule so far:

And then this article was posted a few days ago:

The 30 is live! Breaking down strength of schedule for Reds/Diamondbacks/Tigers/Mets & singing praises of Conforto: https://t.co/RydWgUxk5K

All of which made me wonder, how exactly does strength of schedule work in baseball? With a different pitcher everyday, the ridiculous randomness of play, and general parity across the league, how could you possibly determine strength of schedule in any meaningful way?

The exact formula is 25 percent the team’s winning percentage, 50 percent opponent’s average win percentage, and 25 percent opponents’ opponents average win percentage. In theory, RPI is cool because it controls for the difficulty of other teams schedules, taking the measure a step further, but the inclusion of the team’s own winning percentage is weird. Just look at the current RPI rankings and try to draw a meaningful conclusion. 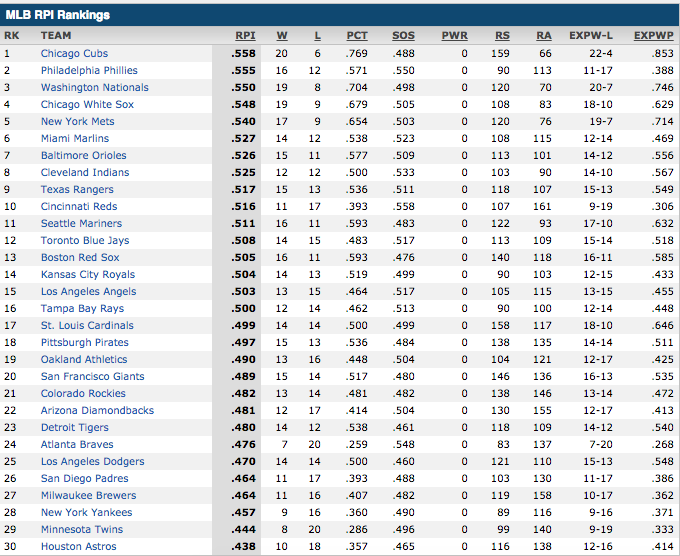 The second method is Baseball Reference’s (the one Jonah Keri used in his article). Here, a team is ranked on how many more runs their opponents would score when compared to the average MLB team. You can clearly see that the Reds and the Braves have had a rough go of it this year, while the Cubs, Dodgers, and Nationals are just coasting. 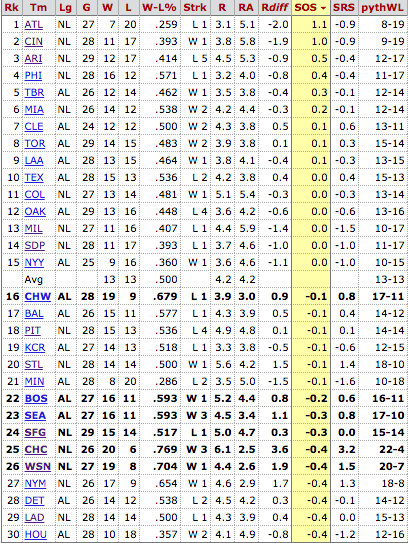 While this method is far more useful (the rankings actually make sense), it still doesn’t do the one thing that a good measure of strength of schedule should: account for pitching.

Imagine you come to the park one day to play the Dodgers and are facing Clayton Kershaw. That Dodgers team seems a lot more fearsome than the one you played yesterday when Alex Wood was starting. But according to all available strength of schedule measures, it’s still the Dodgers so it’s still the same level of difficulty.

With this grievous oversight in how we think of our favorite’s team schedule in mind, I decided to make my own strength of schedule measure, using pitching as the foundation.

What I did was compile for all 30 teams each opposing starting pitcher for 2016 and that pitcher’s FIP from 2015. I used FIP because it is inherently not dependent on the defense behind it, thus more accurately capturing the skill of the pitcher and not the team. I also used 2015 stats as opposed to 2016 or career because a) most pitchers haven’t logged enough innings in 2016 for those numbers to meaningful, and b) factoring the type of pitcher C.C. Sabathia was in his prime to his 2016 self seemed disingenuous.

From those numbers, I assigned a point value to each pitcher, breaking them into different types.

So the first part of my strength of schedule stat was just a raw score portraying the average relative difficulty of pitchers faced.

Realizing that while pitching is an integral part of a team’s success, the other measures do have it right in needing to include whole team measures. After all, Clayton Kershaw pitching in front of the Bad News Bears will not do nearly as well as in front of the Dodgers. That being the case, I included a second numeric score, which represented the difference of the cumulative win-loss records of their opponents. Instead, of taking the present-day win-loss for each opponent though, I took their record at the time of the game, hopefully reflecting the current strength of that team.

To get the final number–the Pitching Dependent Strength of Schedule if you will–I added the raw pitching score to the difference number and then divided by the number of games played.

As you can see, nothing radically changed. The Reds and Braves have still played far and away the hardest schedule, while the Dodgers and the Nationals have been taking a month-long cake walk. The Tigers and the Cubs did jump pretty significantly from the bottom to the middle, but in terms of magnitude, neither has had a particularly difficult road.

Looking at just the Reds, you realize pretty quickly just how strong the NL Central is. The Cubs and Pirates inflate the win differential exponentially, and the both of them plus the Cardinals all have top-tier pitchers throughout their rotation. So the road’s not going to get any easier any time soon.

Though I like to think my measure is a bit more accurate than the professional statisticians, it has its fair share of problems. For one, it doesn’t control for Dallas Keuchel being otherworldly last year–earning Ace status–but being painfully mortal this year. Same with newbies like Kenta Maeda, who has dominated, but earns no pitching points because he has no stats to base from. Also, converted relievers like Juan Nicasio pose a problem in that it is far easier to compile a FIP below three pitching just one inning at a time than with a full starter’s workload.

If any of you have tweaks to my system or have a far superior system to propose in the comments, I’m all ears. Personally, I feel pitching must be accounted for, but obviously the powers that be feel a bit differently.

The bottom line is: This has not and will not beÃ‚Â a fun season for Reds’ fans. But, if you want to point to one cold, unfeeling number to blame, here it is. Point and blame away.