In late March, the Reds claimed former top prospect Dan Straily off of waivers from the San Diego Padres. It didn’t get much attention at the time, but it was a classic low-risk move with the potential to have a high reward and it has proved to be a smart decision by Dick Williams and Walt Jocketty. With injuries continuing to pile up, especially in the rotation, the 27-year-old has come up big in relief and as starter, proving to be one of the few pitchers who can be relied on consistently.

With only six appearances under his belt as a Red, however, he’s still a bit unfamiliarÃ‚Â to Cincinnati fans. Let’s try to break him down in the latest edition of “Kill the Win.”

The talent has always been there for Straily, but he hasn’t been able to put it all together consistently for a myriad of reasons. Since being regarded as a top prospect in the Oakland Athletics farm system, it’s been a bumpy road for Straily.

He finished fourth in American League Rookie of the Year voting in 2013, posting a 3.96 ERA and 4.42 xFIP in 27 starts. He hasn’t been able to replicate that success since, bouncing from the minors to the majors and from organization to organization. The right-hander was traded to the Chicago Cubs in the Jeff Samardzija dealÃ‚Â in 2014 and was involved in another high-profile trade the next year, this time heading to the Houston Astros as a part of the agreement that sent Dexter Fowler to the Windy City. The Astros then traded him to the Padres at the end of spring training earlier this year and he was quickly waived by his new team before getting snatched up by the Reds.

What has held Straily back and caused him to bounce around so frequently? He has always had above-average strikeout rates, but his command escapes him at times. Issues with his shoulder have also hindered his velocity and effectiveness. Last season, he averaged more than a strikeout per inning and walked batters at a lower rate than ever before while spending most of his time in Triple-A Fresno, but that velocity dip played a big factor in allowing 10.8 hits per nine innings, by far his worst career rate at any level. Naturally, this resulted in inflated numbers across the board.

Despite being tossed aside by two teams in March, he’s been able to turn it around so far in 2016. He started out as the team’s long reliever, but injuries have prompted the Reds to move him into a starting role. Overall, the righty has posted a 3.38 ERA across six appearances. A deeper look into the numbers suggests he is likely bound for regression (.193 BABIP, 4.39 xFIP), largely due to a walkÃ‚Â and fly ball rates that are higher than ideal. However, there are signs that his current numbers are more than a simple fluke. With his shoulder reportedly healthier than it has been in some time, he’s continuing to strike out batters at a healthy rate and hisÃ‚Â average fastball velocity is 90.4 mph, up from 89.2 and 88.7 the previous two seasons.

Straily doesn’t rely on an overpowering fastball to get hitters out, instead relying on hisÃ‚Â two plus secondary pitches: the slider and changeup. With a healthier shoulder, each has had improved results through his first six outings of 2016.

Aside from his four-seam fastball, the slider is Straily’s most-used pitch. Even when he has struggled, it has always been his best offering, as major-leagueÃ‚Â batters have a whiff rate of 18.7 percent on it and never hit better than .185 against it in any season. Throughout his career, it has been his go-to putawayÃ‚Â pitch, as it has gone for strike three on 133 of his 239 strikeouts. Keeping the pitch out of the air in a small ballparkÃ‚Â has been huge for him this year, as he’s generating a ground-ball rate of 54.5 percent, the best mark he’s had since his rookie season.

The slider has brought him the most success, butÃ‚Â his best pitch in 2016 has actually been the changeup, withÃ‚Â aÃ‚Â swing-and-miss percentage of 18.3 percent, the highest rate of his career. Of his 22 strikeouts, 10 have come on the pitch as opposed to nine for the slider. If you need further evidence of how good it has been for him, theÃ‚Â average spin rate of Straily’s changeup is 1,367 rpm (with a changeup, lower is better because it drops more in the zone, getting more whiffs and ground balls). Of all pitchers in baseball who have thrown the pitch 50 or more times this season, only three have a lower spin rate than Straily: Edinson Volquez, Matt Shoemaker and Jose Quintana.

For further evidence, take a look at the changeup heat map (courtesy of Baseball Savant), which illustrates how well he’s been able to keep it low and out of the middle of the plate: 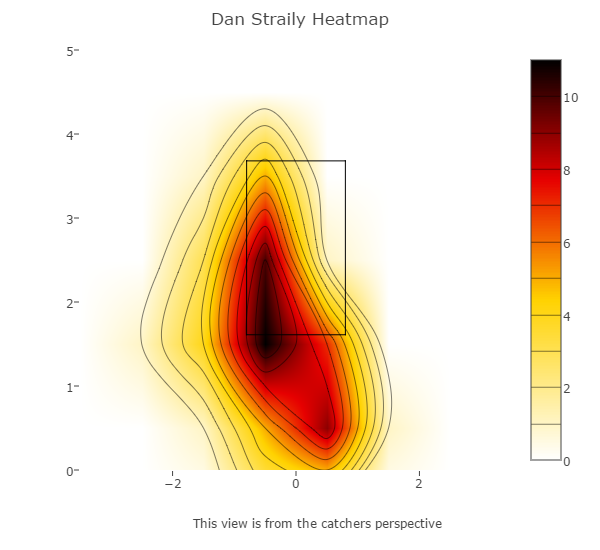 Thanks to his improved health, his heater has also made big strides so far this season. In his rookie season when he was averaging a nearly identical velocity, batters hit just .246/.352/.383 on the four-seamer with a 7.1 SwStr%. Both marks got worse in 2014 and ’15, as Straily’s fastball was hit harder and more frequently. But the trends seems to be reversing, the most encouraging sign being his career-best whiff rate of 9.9 percent on the fastball.

Outside ofÃ‚Â the four-seamer, changeup and slider, Straily’s repertoire is quite underwhelming.

His two-seamer has been always gotten hit hard (.276/.376/.490), while the location on his curveball has been poor (he’s thrown it for a ball more often than a strike). His whiff rates on both pitches are abysmal, with the two-seamer at 6.3 percent and the curve at 4.2 percent. Fortunately, he seems to recognize that they aren’t his best, as they’re his two least-thrown pitches by a wide margin.

As previously mentioned, Straily has also had some trouble with his four-seam fastball. Since he doesn’t throw all that hard, command is all the more important and when he misses with the pitch, it tends to have bad results. He has had a propensity to get hurt by the long ball in his career, giving upÃ‚Â 1.3 per nine innings, and over half (22) of his 42 home runs allowed have come on the four-seamer.

While Straily hasÃ‚Â never had any significant control problems at the minor-league level, walks have been another problem area in the big leagues. He’s averaged 3.7 per nine innings and is allowing free passes at a higher rate than ever before in 2016, which is preventing him from getting very deep into games.

With the numerous young arms the Reds have in the organization, Straily likely isn’t going to stay in the rotation for long. That said, he should provide value as aÃ‚Â long reliever and/or spot starter. Though no one will ever mistake him for Aroldis Chapman when it comes to his fastball, he has two great offspeed pitches to help put hitters away whether he’s a starter or a reliever. He never quite panned out as a top prospect, but he’s shown he can get big-league hitters out when he’s healthy. As long as he can reduce the walks and home runs, he can stick around for a long time.