John Lamb did his best to keep the Reds in the game during his 2016 debut. Lamb was called up from Louisville in the last minute because Jon Moscot could not go. He was on a rehab assignment after starting the season on the DL.

Lamb had to pitch around trouble for the majority of the night, but only allowed one run in six innings. He left the game with the score tied at 1.

But then the Cincinnati Reds bullpen took over.

The Reds bullpen set a MLB record by allowing a run in their 21st consecutive game. Caleb Cotham did the honor by allowing a single to Kelby Tomlinson with two outs in the 8th inning.

The Reds offense was dominated tonight by Jeff Samardzija for 8.0 innings. The Reds had a total of 3 hits tonight. 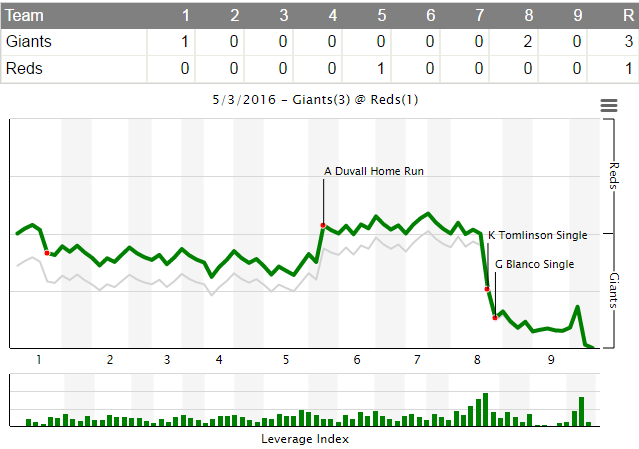 According to FangraphsÃ‚Â WPA statisticÃ‚Â (winning percentage added), the most important play of the game was Caleb Cotham allowing an RBI single to Kelby Tomlinson with 2 outs in the 8th inning, giving the Giants a 2-1 lead.Ã‚Â That play decreased the Reds chances of winning by 24.2% (from 49.9% to 25.7%) 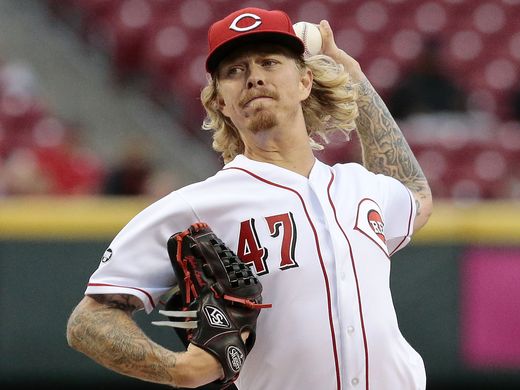 John LambÃ‚Â did a really nice job in his 2016 debut. For starters, he actually made it through six innings. Entering tonight, Reds starters had only completed six innings in 9 of the 26 games. Second, he kept the ball in the park. Lamb’s bread and butter was his change-up tonight. Lamb was projected by ZiPS to be the Reds third best starter in 2016 behind Iglesias and Bailey. Finnegan has been pretty good so far in 2016, but Lamb might actually be the Reds best starter in their current rotation. His final line: 6.0 IP, 6 H, 1 R, 3 BB, 4 K, 3.24 FIP.

Adam DuvallÃ‚Â hit his 3rd home run of the season. I don’t think Duvall is a future everyday player for the Reds, but as I’ve said before I believe he could be a nice power bat off the bench with position flexibility (LF/RF/3B/1B). Those kind of guys can be somewhat difficult to find.

Tony CingraniÃ‚Â pitched a perfect 7th inning. Anytime a member of the Reds bullpen accomplishes this in 2016, it calls for some serious celebration. GO CRAZY FOLKS, GO CRAZY!

TheÃ‚Â Reds offenseÃ‚Â had a grand total of 3 hits. If only the Reds had got the offense last night……tonight.

Caleb CothamÃ‚Â was looking like a decent pitcher in the Reds pen, but he has now allowed 5 ER in his last 3.0 IP.

Billy HamiltonÃ‚Â had to leave the game with a jammed thumb. It’s the same thumb injury he has been dealing with for the last two weeks.

The Reds are losing a lot of baseball games. That is not breaking news, but I thought it needed to be put in the “Negatives” section of this.

18+ years of team control over Lamb, Finnegan, and Cody Reed for two-ish months of Johnny Cueto might still be talked about in 2040.

If Tony Cingrani were only more consistent. Has dominant shutdown stuff when he has command. Would be a big bullpen weapon.

Samardzija breaks his bat over his knee after striking out. Never seen that move in real life before. #Reds #Giants pic.twitter.com/GVZYSU1vYO