Johnny Cueto made his return to Great American Ball Park, and faced the Reds for the first time since being traded last summer. It had to be an emotional night for Cueto, facing the only team he ever knew before last year.

Things started off good for Johnny. He retired 6 of the first 7 batters he faced. In the 2nd inning, Cueto was able to sneak a single past Votto and Phillips and drive in two runs. Cueto had a 3-0 lead after two innings, and Reds fans were bracing for a long night against their former ace.

Joey Votto would have none of that.

The Reds scored six runs in the 3rd inning, and the big hit came off the bat of Joey Votto. Before that the rally was started by unlikely sources. Hits by Hamilton, Barnhart, and De Jesus set up Votto for his big three-run blast. Billy Hamilton was dancing all over second base during Votto’s big 7-pitch at-bat. It certainly appeared to have an effect on Cueto.

Brandon Finnegan was acquired as one of the pieces for Johnny Cueto last summer. Tonight had to be a big night for him as well, trying to prove himself. Finnegan struggled early, but settled in and pitched a nice game.

But then things got turned over to the bullpen. You probably already know how this story ends.

J.C. Ramirez and Drew Hayes combined to give up five runs in the 7th inning, and just like that the Reds 6-3 lead turned into an 8-6 deficit. Tonight was the 20th consecutive game that the Reds bullpen allowed a run. That tied a major league record.

What's the level beyond dumpster fires? Bonfires? Forest fires? The Reds bullpen is whatever is worse than a dumpster fire.

The Reds offense couldn’t get anything going for the rest of the night, and the Reds lost for the 7th time in their last 8 games. The Reds fall to 10-16 on the season. 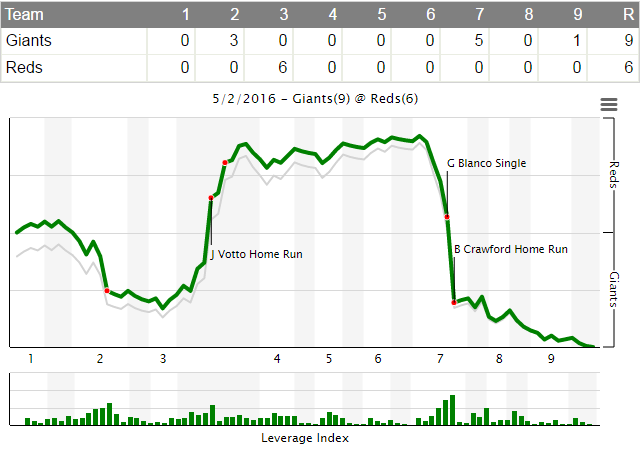 According to FangraphsÃ‚Â WPA statisticÃ‚Â (winning percentage added), the most important play of the game was Drew Hayes allowing a 3-run home run to Brandon Crawford in the 7th inning, giving the Giants a 8-6 lead.Ã‚Â That play decreased the Reds chances of winning by 37.4% (from 56.8% to 19.4%) 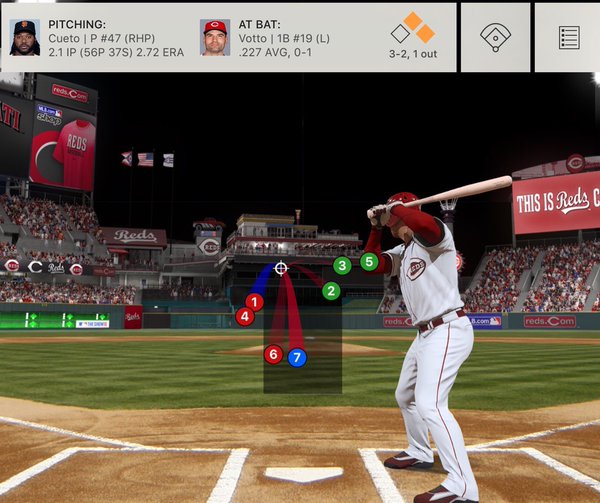 For a guy who has been struggling for most of 2016, it was a big moment for Votto to blast a three run bomb against his former All-Star teammate. Votto battled with Cueto for 7 pitches, and was finally able to drill a 3-2 mistake to dead center.

Brandon FinneganÃ‚Â pitched a solid game. If Joey Votto would have made a play that he really should have in the 2nd inning, the night could have looked even better for Finnegan. His final line on the night: 6.0 IP, 6 H, 3 ER, 3 BB, 4 K.

Billy HamiltonÃ‚Â had a big double during the 2nd inning rally, but it was what he did on the bases that might have made the biggest impact. Hamilton was dancing around second base, and it was pretty apparent that it was getting into Cueto’s head. You are probably thinking the same thing I am…..if he can only get on base more.

There is no silver lining in Devin Mesoraco going to the DL, but the closest thing to it is Tucker Barnhart getting more playing time. Barnhart really is a joy to watch. He had another hit tonight and scored a run. He is hitting .304/.373/.391 on the season.

ThatÃ‚Â Reds bullpenÃ‚Â man. They are setting records, and just making baseball downright miserable for fans in the queen city. Yikes, this is really bad.

Joey VottoÃ‚Â had a ball go under his glove in the second inning that cost the Reds two runs. It was really a play that our hero should have made.

The Reds got some really bad news today.Ã‚Â Devin MesoracoÃ‚Â was placed on the DL because of a torn labrum in his left shoulder. There is no word yet if he will need surgery or not. It really is such a bummer for Mesoraco. He can’t catch a break.

You really have to feel bad for Devin Mesoraco. HeÃ¢â‚¬â„¢s been snake-bit since his brilliant 2014 season.

Devin Mesoraco has taken 95 at-bats since since signing a $28 million extension with the Reds in January 2015. 18 starts at catcher.

Seeing Joey Votto vs Johnny Cueto was just surreal. The best Reds hitter vs the best Reds pitcher in my lifetime. Well, you could argue Jose Rijo was better, but I was to young to blog about the Reds then…..

Ok, so some clowns were chanting “CUUUUUUUETOOOOO, CUUUUUUETOOOOO” during the game tonight. I’m not usually one to tell the paying customers how to act (I don’t care if people “woo” or do the wave), but come on guys! That is just messed up.

*There is a report that Moscot may not be able to go tomorrow. John Lamb was scratched from his start in Louisville tonight, so he could be called up.

Jon Moscot's left shoulder is giving him enough discomfort that Bryan Price said they're concerned if he can pitch tomorrow, stayed tuned