It was looking like a good night for the Cincinnati Reds early. Ivan De Jesus Jr. got the Reds off to a big start. De Jesus drilled a two-run home run in the fourth inning to give the Reds a 3-0 lead. Everything was looking good.

We should have known better.

Brandon FinneganÃ‚Â pitched very well, holding the Mets scoreless over six innings. Bryan Price decided to leave Finnegan in the game to pitch in the seventh, and it backfired. Finnegan gave up a three-run home run to pinch-hitter Yoenis Cespedes to tie the game.

Tony Cingrani would allow the go-ahead single later in the seventh inning. The Reds offense couldn’t get to the Mets bullpen, and the Reds lost their third consecutive game by a final score of 4-3. It was the Reds tenth consecutive loss to the Mets. 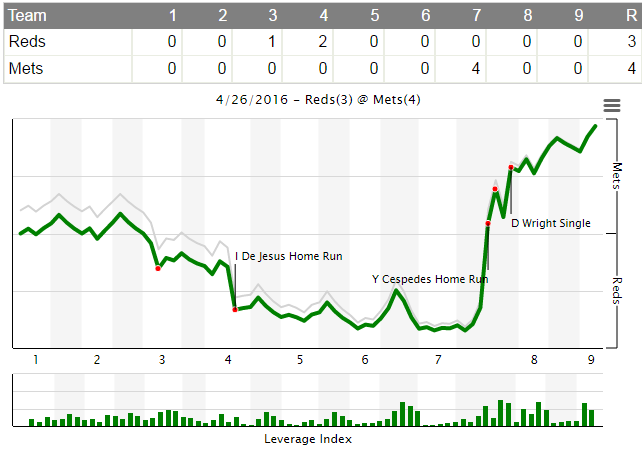 According to FangraphsÃ‚Â WPA statisticÃ‚Â (winning percentage added), the most important play of the game was Brandon Finnegan giving up a 3-run home run to Yoenis Cespedes, tying the game at 3.Ã‚Â That play descreased the Reds chances of winning by 36.8% (from 82.4% to 45.6%).

Brandon FinneganÃ‚Â was really good for six innings. I think it is important to focus on that and not the 7th inning struggles. He had only allowed 2 hits through the first six innings. Teams are having a difficult time hitting Finnegan early in the season. This kid has a very bright future with the Reds.

Ivan De Jesus Jr.Ã‚Â hit his first home run of the season, and it was a big one. De Jesus drilled a pitch into the left field seats in the third.

Tucker BarnhartÃ‚Â has been such a nice backup catcher for the Reds. He had three hits on the night. One of those hits came in the second inning when Tucker battled with Bartolo Colon for 12 pitches before ripping a double down the right field line.

Billy HamiltonÃ‚Â made an incredible catch, which saved a run in the 5th inning. Hamilton is just incredibly defensively in centerfield.

I know some folks like pitchers beingÃ‚Â pushed along in their development, but I hated Bryan Price giving Finnegan a chance to ruin his great start. Finnegan had pitched six great innings, and his pitch count was approaching 100 pitches. Why not just let the kid leave the game with a good taste in his mouth?

Mets color analyst Ron Darling summed up my thoughts best tonight during the broadcast: “Your bullpen is struggling, but I think it’s wrong to use that to make your decision. You’ve got a young pitcher who gave a great effort, I want him to leave the game with a good feeling about himself. He doesn’t have a good feeling about himself in the locker room right now. He should be, because he was incredible.”

Homer Bailey made his second rehab start tonight in Pensacola for the AA Blue Wahoos. Bailey was not helped out by the Blue Wahoos defense, as they made five errors with him on the mound. Bailey’s final line: 4.0 IP, 5 R, 1 ER, 6 H, 2 BB, 3 K. The good thing is that is looks like the velocity is there. Bailey will make at least one more rehab start on Monday with AAA Louisville.

Just two elite athletes out there giving it their all. pic.twitter.com/fvlOy2Y1Cr

Colon's walk of Votto in the 5th inning was the Mets 1st BB in four games, in the same time span the Reds walked 19 guys.

TheÃ‚Â CubsÃ‚Â currently lead the Brewers 3-1 in the 7th. TheÃ‚Â PiratesÃ‚Â lead the Rockies 4-2 in the 5th. TheÃ‚Â CardinalsÃ‚Â are scoreless in the third inning in Arizona.