Cornelius McGillicuddy parlayed a ten-year career as a back-up catcher into a managerial gig with an expansion ball club in Philadelphia. Over the next 50 years, McGillicuddy, better known as Connie Mack, rocked a suit and tie everyday and led the AÃ¢â‚¬â„¢s to 3,582 wins and five World Series titles. In 1937, Ã¢â‚¬Å“The Tall TacticianÃ¢â‚¬Â was a member of the second class voted into the Baseball Hall of Fame. 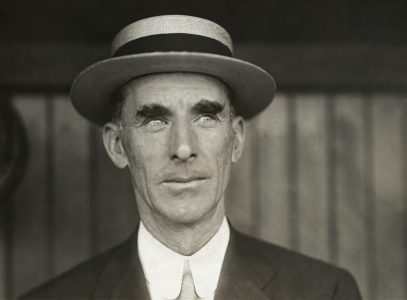 (Is it just me, or does the picture above of Mack kind-of, sort-of look like a white walker?)

ThatÃ¢â‚¬â„¢s worth notingÃ¢â‚¬Â¦because the 2016 Reds are making a run.

The 2016 Reds bullpen has a staggeringly putrid 6.26 ERA. Two days ago it was 6.89 but somehow, miraculously, Drew Hayes, JJ Hoover, and Ross Ohlendorf managed to only give up one run in 6.1 IP on Sunday after Alfredo Simon Ã¢â‚¬â€œ our innings eater Ã¢â‚¬â€œ once again failed to make it through three innings. (Seriously, when we look back on the highlights of this season, surely that will make the top five.)

What makes that 6.26 ERA really impressive is that the Reds had a 2.42 ERA through the first week of the season. It wasnÃ¢â‚¬â„¢t until they took the team plane to Chicago that the wings fell off. (Wings that most of us would have argued were held on by chewing gum.) They put up an 8.22 ERA in the second week and a 7.67 ERA the third week. And remember, that 7.67 ERA is including SundayÃ¢â‚¬â„¢s miracle. Prior to that it was 9.74 for the week. Put it all together and you have that revolting 6.26 ERA. To put that into perspective, here is where it would place in the list of the worst bullpens of all time (since the integration of baseball in 1947):

The thing that jumps out about the list is that five of the top seven worst bullpens of all time were in one season: 1950. What the heck happened in 1950? You know, other than the fact that some of the managers were white walkers? It was a haves and have-nots season in the AL. There were only eight teams in the each league then and four of the AL teams (Yankees, Tigers, Red Sox, and Indians) won 90 games. The other four (Senators, White Sox, Browns, and AÃ¢â‚¬â„¢s) had a winning percentage below .400! The Senators won 67 and finished 5th, 25 games behind the 4th place Indians. MackÃ¢â‚¬â„¢s AÃ¢â‚¬â„¢s had a .338 winning percentage and finished dead last, six games behind the St. Louis Browns. In a quirk of the era, everyone on the BrownsÃ¢â‚¬â„¢ staff who pitched in more than a single game that season was used as both a reliever and a starter except for one: Tom Ferrick, the same Tom Ferrick who would serve as Bernie TebbettÃ¢â‚¬â„¢s pitching coach on your beloved Redlegs from 1954-1958.

(The workhorse of that woeful Browns team was named Cuddles Marshall. He put up a 7.88 ERA in 53.2 innings in 1950 and never played in the major leagues again. His teammate, briefly, was Ribs Raney who came on in relief in the first game of a doubleheader on April 23rd against the Indians and never pitched again. There was also a Stubby, a Snuffy, and a Sherm on the roster. Cuddles, Ribs, Stubby, Snuffy, and Sherm. Baseball was awesome in the 1950s.)

Despite the fact that everyone but a few guys pitched as a starter and in relief, Fangraphs seems to arbitrarily define players as either starters or relievers. Subsequently, they only credit the BrownsÃ¢â‚¬â„¢ bullpen with 172.2 IP whereas Baseball Reference gives them 358.1 IP (and a slightly less cringe-worthy 6.81 ERA). So letÃ¢â‚¬â„¢s use 1969 Ã¢â‚¬â€œ the year the mound was lowered, divisions were created, and the Cubs choked away the NL pennant Ã¢â‚¬â€œ as our starting point. (Jason Stark once wrote a pretty compelling argument for making 1969 the start of Ã¢â‚¬Å“modern era baseballÃ¢â‚¬Â anyways.) Fangraphs isnÃ¢â‚¬â„¢t wonky in 1969. HereÃ¢â‚¬â„¢s the list:

That seems doable, right? We could shave a Ã‚Â½ run off of that ERA and still crack the top ten in the modern era list and we sure as heck could make the franchise list for worst bullpens in the modern era:

Oh, I wish I hadnÃ¢â‚¬â„¢t posted that. Just looking at that list brings up some really awful memories of the 2000s.

Right now we have the perfect conditions for a bad bullpen blizzard: an injury depleted rotation throwing less innings than expected resulting in a miscast collection of suspect arms to throw more innings in relief. Reds relievers have thrown the second most innings in all of baseball Ã¢â‚¬â€œ and thatÃ¢â‚¬â„¢s not good! Look at the BB/9 rate up there. 5.52! Nearly a walk and a half higher than the next highest total! Also, I love that the Reds are actually out-performing their FIP. Ugh.

The general consensus is that things will get better; the cavalry is on the way. Soon Homer and Tony D will come back to the rotation. John Lamb and Michael Lorenzen might be up soon, too. And then thereÃ¢â‚¬â„¢s Robert Stephenson and Cody Reed and a half dozen other legitimate young arms that could make an impact in either the rotation or the bullpen. The AAAA flotsam and jetsam that have created this tire fire will be discarded for legitimate major league arms.

But who knows exactly when that will happen? Or what else could go wrong? Anytime players like Tim Melville, Blake Wood, Ross Ohlendorf, Jumbo Diaz, Keyvius Sampson, Drew Hayes, and, sadly, JJ Hoover get innings – youÃ¢â‚¬â„¢re in trouble. At the end of the day, how much difference is there between those guys and Aaron Myette, Juan Padilla, Jesus Sanchez, Jung Bong, Brian Reith, Joe Valentine, and Phil Norton? And thatÃ¢â‚¬â„¢s why the bullpen is so bad. (For the record, the last collection of names were actual people who pitched for the 2004 Reds. If youÃ¢â‚¬â„¢re smart, you completely blocked that season out of your memory.)

But thereÃ¢â‚¬â„¢s a small bit of hope. Go back to that list of the worst bullpens in baseball since 1969. The Rays miraculously bounced back in 2008 and made it all the way to the World Series primarily on the back of the 4th best bullpen in the majors. (Read all about it in Jonah KeriÃ¢â‚¬â„¢s excellent The Extra 2%.) The Tigers had a top ten bullpen within four years. The 2000 Mariners had the best bullpen in baseball in 2000 and 2001! Bullpens are strange creatures. They can easily change from year to year. Little roster moves can have huge effects.

And letÃ¢â‚¬â„¢s look at our Reds. The 2004 Reds rebounded toÃ¢â‚¬Â¦oh. Well, the 2007 RedsÃ¢â‚¬Â¦nope. The 2005 Reds didÃ¢â‚¬Â¦hmmm. On second thought, maybe our time would be better spent deciding which current Reds bullpen pitcher should be nicknamed Ã¢â‚¬Å“Cuddles.Ã¢â‚¬Â Tony Cingrani? JJ Hoover looks like a Ã¢â‚¬Å“ShermÃ¢â‚¬Â to me. And what about Ã¢â‚¬Å“Ribs?Ã¢â‚¬Â