Bracket off Saturday and the combined score was 33-1. Leave out one inning and it was 39-7. That’s Ohio State vs. Kent State in college football. Tiger vs. the field at the 1997 Masters. It’s the Allies vs. the Axis in World War II. Thorough, complete devastation.

For Reds fans, watching the Chicago Cubs obliterate the home town team this weekend was painful. It was tempting to look away. That’s an understandable response for fans.Ã‚Â But the Reds front officeÃ‚Â can’t afford to avert its eyes. It has to pay close attention and learn from the experience. Not make excuses. A dead arm doesn’t explain 33-1.

Winning baseball involves hitting, pitching, fielding, throwing and running. Within each of these categories are sub-categories. You can add intangibles if you’re inclined to do so. Successful teams are those that accumulate the biggest pile of talents in the right combination.

Over a 162-game major league regular season, increments pay off. The edge in talent, even when tiny at the margin, across that long schedule makes the difference in wins and losses. In time, the connection between capability and winning becomes measurable. The most skilled teams rise to the top in the standings. Few question that those with the best regular season record are deserving.

But all that changes in the post-season. Every year, teams with worse records advance over those that were more accomplished. ThatÃ¢â‚¬â„¢s the crapshoot that is todayÃ¢â‚¬â„¢s post-season. Eight teams instead of two survive beyond the regular season. They play short series. Anything can happen and often does.

The best a front office can do is put together a baseball team with a skill set that succeeds over the slog of the regular season. That means winning a division championship to avoid the Wild Card play-in game. It means a better winning percentage to get the home field advantage. But after that, you sit back, watch the post-season unfold and hope for the best.

In 2008Ã‚Â under manager Lou Pinella, the Cubs won 97 games, the best record that year in the National League. But Pinella’s Cubs were swept in the first round of the post-season by an 84-win Los Angeles Dodgers team.

On October 21, 2011, the Cubs lured Theo Epstein from the Boston Red Sox to run the baseball side of their organization. The Red Sox had hired Epstein at the age of 28 to be their general manager, the youngest GM in history of MLB. That was 2002. Epstein overhauled the Sox, leading to a World Series championship in 2004, the first in Boston in 86 years. A second followed in 2007. In employing Epstein, the Cubs were looking for a similar rags-to-riches revival.

Fast forward to 2015. The Chicago Cubs again won 97 games. They beat the Pirates in the Wild Card game and the Cardinals 3-1 in the NLDS before losing to the New York Mets in the NLCS.

Epstein’s rebuilding process from 2012-2014 caused plenty of pain. As the Cubs ditched veterans, their record got worse. In 2013, just three years ago, they lost 96 games, finishing 31 games out of first place. That Cubs team lost 14 of 19 games to the Reds. Kris Bryant was still in college. The Baltimore Orioles had sent Jake Arrieta to the minors.

Today, not a single player remains from that 2011 Cubs team. In five seasons, Theo Epstein has turned over the entire 25-man roster. Here is a list of the Cubs starting position players as the 2016 season began. It also indicates when and how each was acquired.

Plate discipline is one of those aforementioned baseball talents. ThatÃ¢â‚¬â„¢s the skill hitters develop that allows them to swing at pitches they can handle and lay off pitches outside the strike zone. We’ve learned that swinging at pitches outside the strike zone leads to lower batting average and reduced power. A close corollary of that talent is the ability to take a walk, a by-product of waiting for a good pitch to hit.Ã‚Â For years, major league organizationsÃ‚Â undervalued plate discipline.

Studies have shown a teamÃ¢â‚¬â„¢s on-base percentage (OBP), far more than its batting average (AVG), to be highly correlated with scoring runs. The difference between AVG and OBP is the base on balls. The ability to walk, like the ability to hit for average and to hit with power, helps a team score runs.Ã‚Â Over the past decade, most baseball organizations have absorbed that lesson and have started to place greater value on acquiring hitters with higher walk-rates. Some even try to teach mental discipline at the minor league level.

No front office has walked that walk, so to speak, more than Theo EpsteinÃ¢â‚¬â„¢s Chicago Cubs. He has transformed one of the worst offenses in terms of taking walks into the best.

Every one of the Cubs 2016 starters had an above average (7.7%) walk-rate in 2015. ItÃ¢â‚¬â„¢s clear that a central part of the Cubs plan is finding players who not only can hit well, but also ones who have plate discipline. The difference between the 2011 and 2016 Cubs is stunning.

The Cubs revival isnÃ¢â‚¬â„¢t just about plate discipline. Their lineup also hits with above average power. They took 23 walks in last weekend’s series, compared to 11 by the Reds. But they also out-homered the Reds 11-5. The Cubs can walk and hit long balls at the same time.

ButÃ‚Â comparing the two clubs is unfair because the teams are in vastly different phases of their competitiveness cycle. The season series isnÃ¢â‚¬â„¢t a fair fight any more than it was from 2012-2013 when the Reds record was 26-9 against the rebuilding Cubbies.

That doesnÃ¢â‚¬â„¢t mean there arenÃ¢â‚¬â„¢t important lessons to draw from what Theo Epstein has done. The Cubs experience demonstrates how much a specific plan by a front office can impact the kind of team they put on the field if they stick with it.

Of course, every team says they have a plan. But when following their stated path becomes tough, they donÃ¢â‚¬â„¢t always follow through. Even if clubs do hold firm, their ideas arenÃ¢â‚¬â„¢t always smart or unique.

ThatÃ¢â‚¬â„¢s not the case with the Chicago Cubs. While the rest of the league continued stockpiling pitching as though 40-home run hitters just fell off training tables, Theo Epstein recognized in the post-PED era that young, impact position players were becoming scarce. And boy, did he act on that plan.

Beginning in 2012, the Cubs started to collect key hitters. Note how these names match up to their current lineup. Start with trades. Anthony Rizzo, Addison Russell and Miguel Montero were acquired in exchange for pitching. Same the with amateur draft. Instead of using the Ã¢â‚¬Å“best available talentÃ¢â‚¬Â theory, the Cubs went after hitters with their top pick. That strategy has produced Kris Bryant and Kyle Schwarber. They followed that strategy in their international signings where their most expensive was a hitter, Jorge Soler. Last season, their first round pick in the amateur draft was Ian Happ, an outfielder from the University of Cincinnati and all six of their international free agents with bonuses in excess of $1 million were position players.

Not just any hitters. Ones that exhibit the skill of plate discipline.

Over the past decade, theÃ‚Â Reds have remained indifferent (at best) to the skill of plate discipline. Dusty Baker, who managed the Reds for six seasons, disparaged patience at the plate. Walt Jocketty acquired players, including leadoff hitters, without regard for their walk-rate. He also questioned Joey VottoÃ¢â‚¬â„¢s approach at the plate. They have filled the role of leadoff hitter as though on-base percentage was an afterthought. Last season, the Reds rewarded two players with Opening Day bench spots who had three walks in 124 spring training plate appearances. Even when the Reds front office has told the team’s fans they would look for hitters who got on base more, they ended up doing the opposite.

Old habits – a disinterest in paying a premium for the skill of plate discipline – die hard.

Years of neglecting this talent have produced a lineup that walks a lot like the 2011 Cubs: 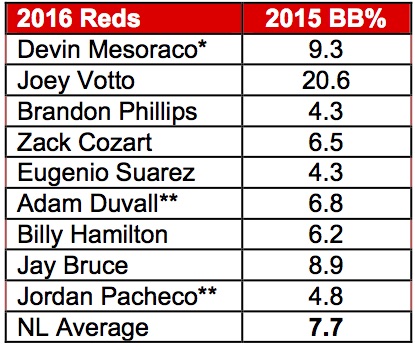 Joey Votto is a superstar when it comes to plate discipline. HeÃ¢â‚¬â„¢s the best in baseball measured by swinging at the fewest pitches outside the strike zone and taking walks. Beside Votto, the Reds lineup is mostly swing-and-miss when it comes to being selective at the plate. Taking account of hitters and pitchers, the Cubs and Reds are at opposite ends of the net walks spectrum.

On the one hand, the Reds have a solid record with recent top draft picks. Jesse Winker has an outstanding career minor league walk-rate of 14.1%. Phil Ervin (10.4%), Alex Blandino (10.0%) and Tyler Stephenson (10.2%) also have good numbers. The question is whether they can sustain those minor league rates as they move into tougher competition.

But the Reds front office has had a dismal performance when it comes to trades and free agent acquisitions. Willie Taveras, Orlando Cabrera and Marlon Byrd are among the litany of players acquired with poor plate discipline. Shin-Soo Choo is a notable exception. But recall that Choo would never have become a Red if the Minnesota Twins hadn’t backed out of a trade sending Ben Revere to Cincinnati. The Reds front office had targeted Revere, who has one of the worst walk-rates in baseball.

The low point came this off-season, with the Reds in full rebuilding mode and Todd Frazier their best remaining trade chip. The organization became fixated on acquiringÃ‚Â Jose Peraza for his speed and batting average. But Peraza has a way below-average walk-rate in the minor leagues (4.8%). An organization aspiring to improve its plate discipline and on-base percentage can’t miss like that when they have the opportunity to trade a player like Todd Frazier.

Reds fans hope when the guard changes for good on Joe Nuxhall Way that this will get better. Yet, the alternate vision the new younger voices have presented so far is not reassuring. They believe speed and defense are the talents that bring success in major league baseball. So they plan on acquiring those skills. Not power. Not plate discipline.

DoÃ‚Â speed and defense help against the Chicago Cubs home runs and walks?

But that’s why this Reds front office valued Jose Peraza so highly. Maybe they’re right to do so. But if that’s the strategy in the Rebuild Binder, we can expect to see the club continue to fall short when it comes to plate discipline. Other front offices are in relentless pursuit of that quality, so it’s expensive in the free agent and trade markets. If an organization doesn’t see plate discipline as a high priority, they won’t be willing to pay enough for it, in cash or trade. The Reds look for on-base percentage and end up with Brennan Boesch.

Theo EpsteinÃ‚Â would be the first to say thereÃ¢â‚¬â„¢s no one right way to build a winning baseball team. Talent can be assembled to great effect in different ways. The Baker/Jocketty Reds won two NL Central championships over 162-game regular seasons.

We’ll know soon whether Epstein’s Cubs have invested in a successful strategy. 97 wins last year is a darn good early return.Ã‚Â If they win a few division titles and more, it might be time to consider worshiping the ground they … walk on.