Zack Cozart tends to playÃ‚Â in bursts. I don’t quite mean his quick-twitch, hot off the button fielding for the Reds at short, but that does certainly apply. Rather, I’m talking about his bat.

Think of his first 11 games back in 2011. Those fleeting two weeks of .324/.324/.486 slashing and fans hopingÃ‚Â for a well-rounded, centerpiece shortstop. Think of last season and his “is this the same Zack Cozart?” first 40 games that left him in the top three on the team for wRC+, fly ball after fly ball hitting the grandstand with his new refurbished swing. Think of hisÃ‚Â present.

Try not to think how the previous two bursts ended when you think of the present but enjoy the present nonetheless because Zack Cozart is once again on a tear.

Before the season, I wrote on Cozart’s 2016 projections, his injury, and his place in the organization, ultimately concluding this season would likely be his last with the team. Boy is Zack trying to make me eat my words.

For starters, Cozart has had a hit in every game he’s played in in 2016. Through the first seven games, 44 swings, Cozart never swung and missed. The streak ended on swing number 45, but swing 46 kicked off a new streak with a hard double.

In total, through 10 games and 40 plate appearances in 2016, Zack Cozart has seen 128 pitches. Of those pitches, he has swung at 69 of them, with all but eight of those 69 being in the zone. Cozart has made contact with 64 of those 69 pitches, only two of the swings and misses being in the strike zone, both on the outer half.

To put that feat in context, Joey Votto, the resident plate discipline demigod, has seen 237 pitches, swung at 98 of them, and made contact with 83. That’s a 84.7 percent contact rate as compared to Zack Cozart’s 92.8 percent.

Cozart’s contact heat map looks far more like an abstract rendition of Elmo than a man’s repeated attempts to smack a small, fast-moving ball with a relatively thin stick. 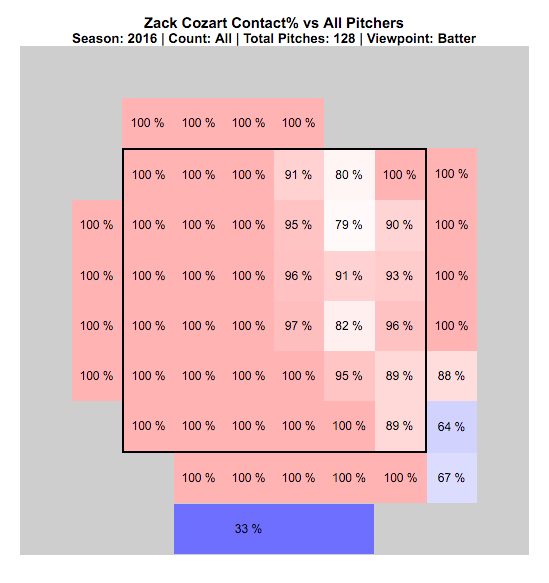 But enough fawning over Cozart. The real question is: is it sustainable?

Short answer: it’s very unlikely. As of right now, Cozart is making contact with pitches outside the zone at a rateÃ‚Â nearly 1o points above his career average and at 5 points above his career average for pitches inside the zone. While sustaining either increase would not be out of the realm of possibility, the law of averages tends to lead to a bit more regression.

Contact aside, Cozart’s batting average didn’t climb to the astronomical .432 it’s at by a bunch of foul balls and ground outs. A part of the reason Cozart has been so successful early on is that he’s pulling less balls (down 6 percent from career mark) and centering more (up 5 percent). Also, he’s just hitting the ball really freaking hard,Ã‚Â with 30 percent of his balls in play classified as that.

But all of that said, it’s still only a sample size of 40 plate appearances. If Cozart is able to draw this success out, or even a modicum of it, for the first 40 games as he did last year, then the Reds might be getting some calls inquiring about the Ole Miss grad.

Couple Cozart’s success with his fielding mate Eugenio Suarez’s own hot start and the top of the Reds’ lineup is almost fearsome. Suarez’s contact rate is nothing to admire, but his hard hit ball percentage has jumped 7.5 points from his career average and his fly ball to home run percentage 12 points. My inner cynic still doubts the Reds chances despite this surprising development–the law of averages rarely hits lightly–but the promise this holds for the future overshadows that doubt for the moment.

Don’t count on Cozart being this good for the rest of the year; it just won’t happen. But maybe the shortstop has turned over a new leaf? The new swing seemed to help him last year, and it certainly hasn’t hurt with the start of 2016, so who knows? Maybe Zack Cozart did have a bit of career rejuvenation at age 30? Or maybe another injury is lurking right around the corner?

I think I speak for us all when I say I desperately hope its the former.