Jon MoscotÃ‚Â has never been a flashy prospect.Ã‚Â He was a fourth-round draft pick by the Reds in 2012 out of Pepperdine University. He doesn’t throw in the upper-90s like so many pitchers do today, doesn’t have a devastating breaking ball and doesn’t strike out many hitters.

ButÃ‚Â nevertheless, he has managed toÃ‚Â work his way to the big leagues.

With only four career starts in Cincinnati — one of which lasting for only two outs — the 6-foot-4 rightyÃ‚Â is still a relative unknown to Reds fans, so let’s try to break him down in this week’s edition of “Kill the Win.”

Likely the first time many even heard about Moscot for the first time was in spring training of 2015, when manager Bryan Price raved about the young right-hander.Ã‚Â Moscot didn’t earn a spot in the Cincinnati rotation right away, butÃ‚Â eventually worked his way to the big leagues in June after posting aÃ‚Â career 3.61 ERA, 19.0 K% and 7.6 BB% in 398 2/3 minor-league innings.

Moscot’sÃ‚Â first two starts were a bit rocky. In his five-inning debut against the San Diego Padres, he struggled with command in his first inning as he walked three batters and allowed a pair of runs. He rebounded to throw five innings in total, giving up four runs — including two home runs — four hits and three walks against three strikeouts. His second outing went a bit better, as he allowed just two runsÃ‚Â and six hitsÃ‚Â through six innings, while walking two and striking out two.

In the first inning of his third outing, the right-hander’s season came to an abrupt end when he dislocated his left shoulder while diving to make a tag in a rundown play at second base. Coming into 2016 fully healed from his injury, he was expected to break camp with the Reds, but suffered an intercostal strain in spring that landed him on the disabled list to start the year.

He finally returned last Sunday against the St. Louis Cardinals and mostly threw well, allowing three runs and six hits in 5 2/3 innings, striking out two and walking one.

So what exactly have we seen from him to this point in his career? Let’s take a closer look.

The interesting thing about Moscot is there isn’t one thing he does particularly well. He doesn’t throw all that hard (fastball average of 91.5 mph that has topped out at 94.9), doesn’t have one great putaway pitch and doesn’t induce a ton of ground balls, but has managed to be effectiveÃ‚Â enough to reach the majors regardless.

Moscot’s line-drive percentage shows part of the reason he has beenÃ‚Â able to find success as a contact pitcher. Opposing hitters are making contact on a lot of his pitches, but they aren’t hitting it particularly hard. His LD% through four starts (19.7 percent) is right in lineÃ‚Â his minor-league rate and is actually below what the MLBÃ‚Â average was for pitchers in 2015 (20.9 percent). This is also reflected when looking at his soft-contact and hard-contact rates compared to last season’s league averages (which have been just aboutÃ‚Â the same over the last several years):

Take those numbers with a grain of salt, of course, since it’s such a small sample size, but it illustrates how Moscot is able to be effective without dominant stuff.Ã‚Â HeÃ‚Â has largely done this through solid command of all of his pitches, stayingÃ‚Â down in the zone and painting the corners rather than trying to blow hitters away. As you can see in the graphic below, when he misses the strike zone, it tends to be low rather than high, which is a good thing for any pitcher, but particularly one like Moscot who can’t use high velocity to make up for his mistakes: 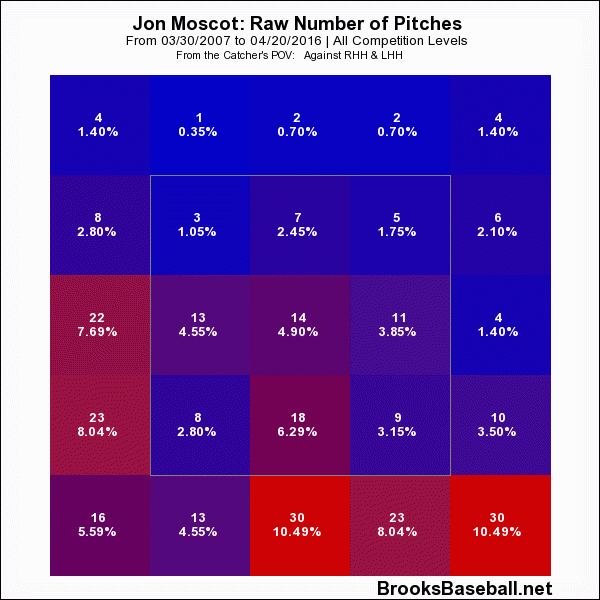 In previous editions of “Kill the Win,” pitch repertoires have been a big focus for whichever hurler has been discussed. With Moscot, however, it’s hard to key in on any pitches that stand out from the rest. PITCHf/x registers five pitches for Moscot: a four-seam fastball, a two-seamer, a slider, a curveball and a changeup. All five are solid, but none can really be considered a plus pitch, either.

In his limited major-league time, the slider has been his best offering, with hitters batting a mere .150/.150/.300 against it when putting it into play. It’s also his best swing-and-miss pitch, with a whiff rate of 9.6 percent. (His whiff rate has been fairly low on most of his pitches, but expect it to improve as he acclimates to major-league hitting.) Aside from his changeup (which he’s thrown only 28 times), the slider has also been his best ground-ball pitch (52.9 GB%). In his first start of 2016, he threw the slider more than any other pitch, which shows he’s getting more comfortable throwing it.

One of the first things that sticks out is that he doesn’t strike out many hitters. After striking outÃ‚Â 22.3 percent of hitters he faced in 2013, he saw that number drop to 16.9 percent in 2014 and 14.5 percent last year. Part of that is facing better hitters as he’s moved up the Reds’ system, but that’s not a small drop-off.Ã‚Â As he adjusts to pitching in the majors,Ã‚Â his strikeout numbers should increase from the meager 10.5 K% he currently sits at, but it may beÃ‚Â unreasonable to expect him to get back to his 2013 levels.

Moscot’s batted ball stats are around the same as they were in his minor-league career; that is, he has a pretty even distribution of fly balls and ground balls. Since he’s more of a contact pitcher, that can leave him susceptible to giving up home runs, as we’ve seen so far in his brief time with the Reds (four home runs in 17 1/3 innings, over one per start if you take away the short appearanceÃ‚Â in whichÃ‚Â he got injured last year).

When it comes to his pitch selection, he’s had a lot of trouble with his four-seam fastball, throwing it for a ball more often than he’s thrown it for a strike. Hitters haven’t been fooled by it either, as they’ve hit .438 against it and whiffed on it just one percent of the time. His two-seam fastballÃ‚Â has proven to be the better pitch thus far (47.1 GB%, 7.8 SwStr%), so we may see him throw it more this year. In fact, he did so on Sunday, throwing it 24 times compared to 18 for the four-seamer.

As long as Moscot locates his pitches, he can be a back-of-the-rotation starting pitcher in the major leagues.

Unfortunately for him, there may not be a place in the Reds’ rotation in the long run. There’s already a surplusÃ‚Â of talented pitchers in the organization who are (or nearly) big-league ready. Raisel Iglesias, Anthony DeSclafani and Homer Bailey figure to be stalwarts in the rotation for years to come, with top pitching prospects Robert Stephenson and Cody Reed on the brink of breaking through to The Show on full-time basis. Brandon Finnegan, John Lamb and Michael LorenzenÃ‚Â aren’t locks to remain starters, but haveÃ‚Â also seen time in Cincinnati and shown flashes of their potential. In the lower levels of the minors, Nick Travieso, Amir Garrett, Keury Mella and others figure to compete for rotation spots in the future.

Compared to all of those pitchers, Moscot has a lower ceiling, meaning his ultimate destination could be the bullpen as a long reliever or spot starter. But with the Reds in the midst of a rebuild and battling a rash of pitching injuries at the moment, the 24-year-old will get plenty of opportunities to start. With so few outingsÃ‚Â under his belt, the jury is certainly still out on Moscot.