Since the start of the 2014 spring training, when Billy Hamilton was installed as the Reds center fielder and leadoff hitter, he has generated as much excitement and frustration as any player in a Cincinnati Reds uniform.Ã‚Â Thanks to Hamilton’s 0-for-13 start at the plate in the team’s opening series against the Cardinals, HamiltonÃ¢â‚¬â„¢s role as a polarizing figure for Reds fans was evident from the beginning.Ã‚Â The ink on the scorecards from those games had barely dried whenÃ‚Â calls began to take pressure off Hamilton by moving him down in the lineup.

Despite the wide variety of opinions swirling among Reds fans, the club itself was unwavering (another word forÃ‚Â stubborn)Ã‚Â in its commitment to playing Hamilton every day and batting him first. Even as the club pursued the 2014 post-season they used Hamilton in the leadoff spot in 99 percent of his plate appearances. It’s hard to believe now, but the Reds were 51-44 at the 2014 All-Star break, 1.5 games out of first place in the division. Over two seasons, the Reds gave Hamilton 800 plate appearances leading off.

Finally, on May 17, 2015, Bryan Price moved Hamilton to the bottom of the batting order after the center fielder had hit just .212/.264/.336 in the first 33 games. Batting ninth didnÃ¢â‚¬â„¢t improve HamiltonÃ¢â‚¬â„¢s numbers, but it did have the intended effect of reducing his plate appearances. He finished his second full season as one of the worst hitters in baseball.

Billy Hamilton fits the traditional template of a leadoff hitter – speed, speed, speed – so well that the vision of him batting first will never drift far from those with old-school minds in the Reds organization. But Billy the KidÃ¢â‚¬â„¢s numbers in 2015 were so rock-bottom stark that Bryan Price put Hamilton on notice this springÃ‚Â that the center fielder would have to improve his on-base percentage before returning to the lead off spot.

Of course, the same question lingers as it has since the spring of 2014: If not Billy, then who?

The front office hasn’t provided a credible alternative to bat leadoff in more than two seasons, really since Shin-Soo Choo in 2013. For the moment, the Reds have stumbled into a suitable leadoff hitter. Zack Cozart, whose career OBP of .284 prior to this season should have disqualified him as a candidate to bat first, has surprised everyone with a wonderful start. Cozart has cut down his strikeouts and changed his approach, hitting more to the opposite field. Billy Hamilton isn’t replacing Zack Cozart at the top of the order any time soon.

But as the Reds head into the third week of the season, itÃ¢â‚¬â„¢s not just Billy Hamilton’s position in the batting order that may be in jeopardy. Hamilton’s ongoing failure at the plate, for the first time in his career, might be costing him playing time.

On Saturday and Sunday, manager Bryan Price played Scott Schebler in center field. Schebler came to the Reds from the Dodgers organization as part of the Todd Frazier trade. While Schebler has above-average speed, he’s been used a corner outfielder through his career. Yet, for two games this weekend, he started ahead of Billy Hamilton.

ItÃ¢â‚¬â„¢s possible that Price is simply giving Hamilton extra rest because of the surgery the outfielder underwent on his right shoulder this offseason. Hamilton was back in center last night. The Reds say Hamilton is healthy and he did play three innings Saturday night as a defensive substitute. The surgery may be playing a less direct role, however. Full recovery from that type of surgery involves more than getting through the soreness and developing strength. It may take a hitter considerably longer to regain his swing mechanics.

Price saidÃ‚Â he started Schebler on Sunday in part because of HamiltonÃ¢â‚¬â„¢s matchup history with Cardinals starter Michael Wacha. Price also referred to the Schebler-Duvall combination where thereÃ¢â‚¬â„¢s some history. (Interesting comment considering Scott Schebler and Adam Duvall havenÃ¢â‚¬â„¢t even been on the same team before this season.) Either way, you have to wonder if “offensive considerations” will continue to cost Billy Hamilton starts.

It’s starting to feel like Adam Duvall has won more than a platoon-shareÃ‚Â of playing time in left field. If that’s the case and if the Reds want to get a good look at Schebler, it will have to come at Billy HamiltonÃ¢â‚¬â„¢s expense.

So what have the Reds seen that would make them begin to develop a preference for Scott Schebler over Billy Hamilton? They’ve each had fewer than three dozen plate appearances this year, so there’s nowhere near enough of a sample size to make sound judgments. But let’s try to put ourselves in Bryan Price’s cleats and check out the data we do have.

Looking at basic performance stats, it isnÃ¢â‚¬â„¢t clear that Schebler has hit better than Hamilton.

Measured by wRC+ (adjusted, weighted run creation) Hamilton has been more productive than Schebler. Hamilton has an edge in on-base percentage. ThatÃ¢â‚¬â„¢s due to HamiltonÃ¢â‚¬â„¢s surprising walk-rate (14.3%), which is more than double his 2015 rate (6.2%). Hamilton wonÃ¢â‚¬â„¢t sustain that rate. But he does appear to be working on plate discipline. Ã¢â‚¬Å“IÃ¢â‚¬â„¢ve been to a few 3-2 counts,” Hamilton said. “ThatÃ¢â‚¬â„¢s something that want to continue. I want to not chase bad pitches and I want to be able to work the count. The hits will fall.”

So what is Bryan Price seeing that leads him to start Scott Schebler over Billy Hamilton for offensive reasons?Ã‚Â Most likely, Price is looking at how hard Schebler is hitting the ball.

New data shows that average exit velocity (EV) is an important predictor of positive offensive performance. While it most directly affects isolated power, exit velocity even affects how pitchers approach hitters. EV is positively correlated with walk-rates because presumably pitchers are less afraid to pitch to soft hitters. So maybe that’s what Bryan Price is looking at in wanting more playing time for Scott Schebler.

The single most important takeaway from what we’ve seen so far in 2016 is that NEITHER Billy Hamilton or Scott Schebler has anywhere near the complete game of a major league center fielder. It’s still way too early to reach that conclusion, particularly for Schebler. But the headline worth highlighting, before we start parsing differences, is that we’re looking at the evil of two lessers.

It’s easy to feel we know Billy Hamilton. Even though heÃ¢â‚¬â„¢s only played for two seasons, the consensus about what he offers has hardened. And, on balance, it adds up to slightly positive. The good aspects of his game Ã¢â‚¬â€œ outfield range, base running Ã¢â‚¬â€œ outweigh the bad Ã¢â‚¬â€œ his hitting. Projections for Hamilton in 2016 were clustered right around 1.8 WAR (includes offense, defense and base running).

We watch Billy Hamilton save runs every night. In St. Louis, Hamilton stole a home run from the Cardinals (pictured below). On the other hand, Schebler has shown that he’s not a natural center fielder. On Saturday, he misplayed a fly ball leading to four unearned runs. HeÃ¢â‚¬â„¢ll get better with experience, but will never reach Billy HamiltonÃ¢â‚¬â„¢s prowess in the field. It’s worth remembering, even with the Reds offense not yet clicking,Ã‚Â that preventing runs is as important as producing runs. 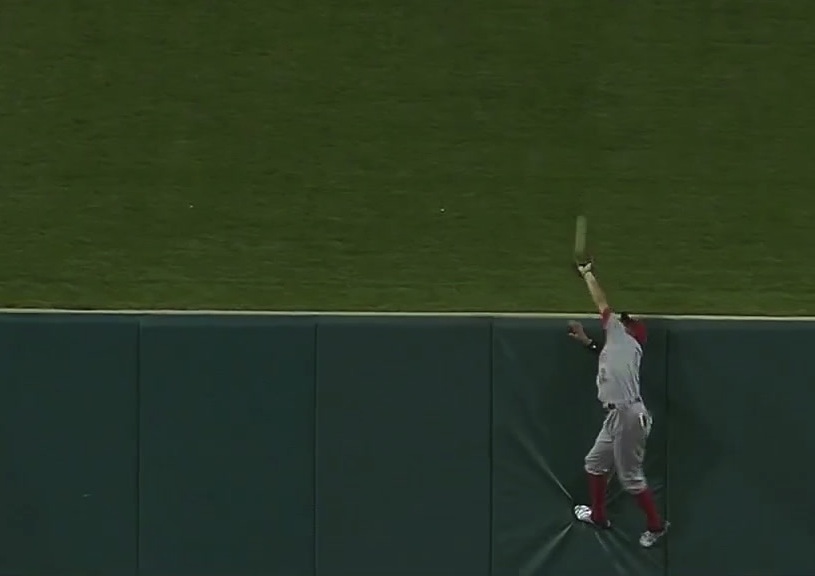 But given the stated non-contending nature of this season — something we’re reminded every night by the bullpen — affording as many good players a thorough look as possible should be the primary goal. Giving Scott Schebler (and Adam Duvall) playing time ahead of Billy Hamilton and exploring creative ways of using Hamilton’s unique skill set is what the Reds need this season. It’s far preferable to clinging to Billy Hamilton’s 2o14-2015 role due to habit and obsolete blueprints. Remember that Dusty Baker used Billy Hamilton as a fourth outfielder, deployed as a pinch runner and defensive whiz, to great effect during Hamilton’s September call-up.

Are we seeing early signs that the Reds no longer regard Billy Hamilton as an everyday player?

Hard to say. Last weekend might have been a one-off occurrence. On the other hand, if Hamilton was losing his regular job, this is how it would look.