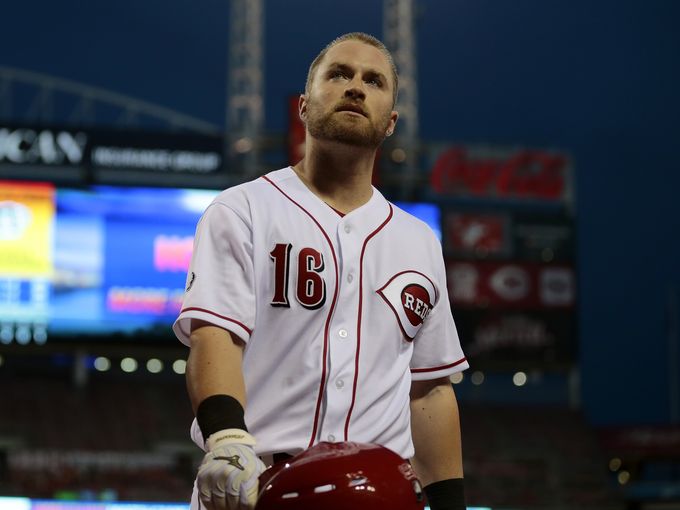 Dan Straily was very strong in his first start with the Reds. Straily allowed a run in the second inning on an RBI groundout, but shut down the Rockies for five innings after that. He struck out the side in the fourth inning.

The Reds offense was dominated all night by Jordan Lyles. They were however able to break through in the 6th inning. Cozart singled with two outs, and then Jordan Pacheco doubled. Cozart was originally held up at third base, but a throwing error allowed Cozart to score and tie the game at one. Lyles didn’t allow an earned run in seven innings, and only had to throw 76 pitches.

Trevor Story hit his MLB leading 8th home run of the season in the eighth inning off Ross Ohlendorf. That gave the Rockies a 2-1 lead. Jumbo Diaz gave up a three run bomb later in the inning to Ben Paulsen. That would be more than enough for the Rockies. The Reds fall below .500 for the first time in 2016 at 6-7. 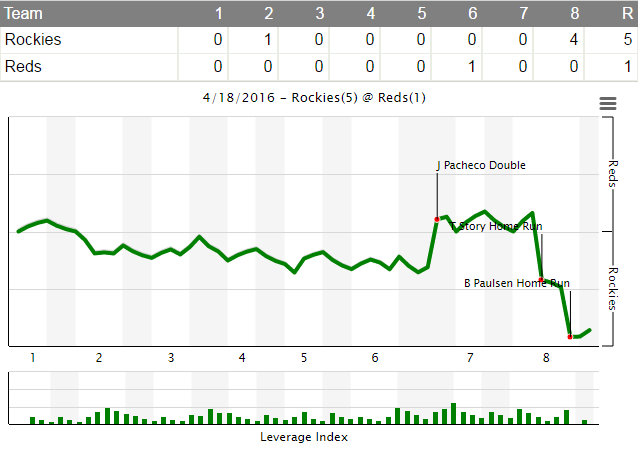 According to FangraphsÃ‚Â WPA statisticÃ‚Â (winning percentage added), the most important play of the game was Ross Ohlendorf allowing a solo home run in the 8th inning to Trevor Story, giving the Rockies a 2-1 lead.Ã‚Â That play decreased the Reds chances of winning by 29.2% (from 58.1% to 28.9%) 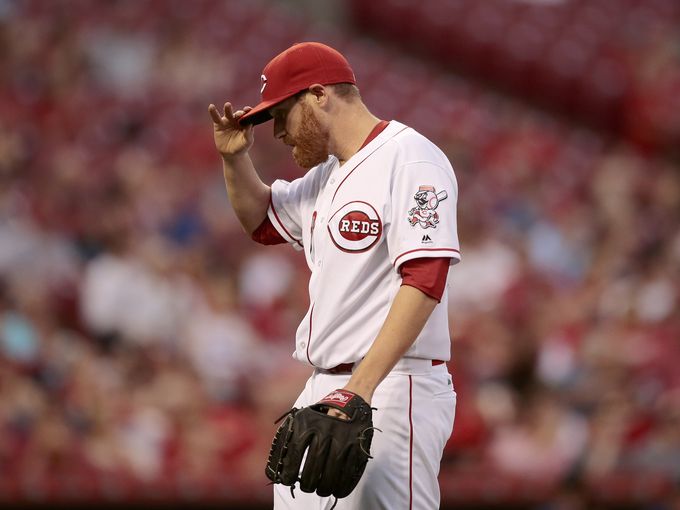 Dan StrailyÃ‚Â was very good in his first start with the Reds: 5.0 IP, 2 H, 1 R, 2 BB, 4 K. I wrote in the game preview today that Straily gives the Reds some upside, and he showed some of it tonight. It was only one start, but you have to like Straily a lot more than Tim Melville.

Caleb CothamÃ‚Â pitched a scoreless 6th inning. Cotham has yet to allow a run through 7.0 innings this season.

Tucker BarnhartÃ‚Â continues to make the best of his starts. He had a hit tonight, and threw out a runner. Barnhart is a really solid backup catcher for the Reds. He is hitting .316/.409/.316 on the season.

The Reds hitters only saw 6 pitches in the first inning. Rockies starter Jordan Lyles didn’t throw many more the rest of the way. Lyles only needed 76 pitched to get through 7 innings. The Reds offense was absolutely dominated by a pitcher who entered the day with a 11.25 ERA. The only run Lyles allowed was unearned, and the only walk Lyles issued was an intentional walk to Votto.

The Reds missed a golden chance in the fifth inning. Jay Bruce hit a rocket off the wall to leadoff the inning. Bruce tried to stretch a double into a triple, but Nolan Arenado made an incredible tag to get Bruce out. Bruce also had a bad slide into third base, as he went into the base with his front foot up. It was a big play in a 1-0 game. 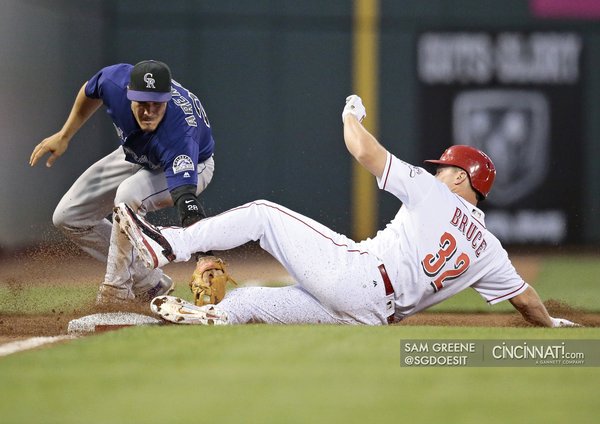 Jumbo DiazÃ‚Â allowed his second home run of the year. Both of the home runs he has allowed have been to the first batter he faced, and they’ve both been of the backbreaker variety.

Ross OhledorfÃ‚Â now has a 9.45 ERA on the season. The sad thing is that it doesn’t feel all that bad on this bullpen.

Jay Bruce's baby is due April 23. Will not be inducing. Does plan to take the 3-day paternity leave allowed him by MLB rules when baby comes

Desclafani threw 40 pitches live BP. All good. If no issues next few days rehab start not far away. pic.twitter.com/mSyXpT8qH7

The Cubs and Cardinals began their first series of 2016 this evening. That rivalry is heating up with Heyward and Lackey both choosing the Cubs over the Cardinals this past offseason. They are even fighting over warmup music! And Anthony Rizzo’s wife is throwing shade!

So now the Cubs bring out their own speaker/music. This rivalry is intense!