It’s fair to question the Reds strategy of saving all their hitting on the road trip – including nine doubles – for this one game. But the Cardinals had won 19 of the last 24 games in St. Louis, so maybe it wasn’t crazy.

That’ll DoÃ‚Â Other than an error-marred second inning when the Cardinals scored four unearned runs, Brandon FinneganÃ‚Â pitched pretty well. He wasn’t efficient, leaving the bullpen to cover four innings. He walked (4) more batters than he struck out (2). But he wasn’t Tim Melville or Alfredo Simon, so Finnegan’s start resonated like Madison Bumgarner.

New Approach Jay Bruce continues to have success with his approach of taking outside pitches to the opposite field. He drove in the Reds first run of the game with a single to left in the fourth inning. In the ninth inning, Bruce showed he still knows what to do with a ball on the inside part of the plate when he pulled a solo shot for his third of the year. Bruce is now seventh all-time on the list of homers for the Reds. (That ninth inning homer turned out to be pretty, pretty, pretty big.)

Swinger Zack CozartÃ‚Â went 44 swings this year without missing. He whiffed at one in the eighth. By comparison, Brandon Phillips has swung and missed at 17.8% of his pitches, seventh highest in the major leagues. Cozart had three hits including a run-scoring double to deep right center in the fifth. He also drove in the Reds sixth run with a productive out. Cozart is hitting .458/.444/.583. Phillips contributed a double down the left-field line driving in the Reds shortstop and another double in the sixth.

Back in the Lineup Devin Mesoraco started for the first time since Monday in Chicago. He doubled over the head of the Cardinals left fielder in the top of the sixth for his first extra base hit. Mesoraco looked good running the bases as well. He scored the go-ahead run after a single by Adam Duvall and a ground ball by Scott Schebler. Mesoraco hit the ball hard in all but one of his plate appearances.

Suarez at Third Eugenio Suarez saved a couple runs with a great defensive play in the bottom of the fourth. He snared a line drive down the third base line with two outs and Cardinal runners on first and second. Saying Suarez has had issues on defense is an understatement. But again, it’s a new position for him and he has all year to learn it. Suarez doubled in the Reds seventh run in the sixth.

Bullpen Report Blake Wood pitched the sixth, giving up a run that could have been prevented if Brandon Phillips doesn’t bobble an easy double-play ground ball.Ã‚Â The Cardinals sixth run scored on another Reds error, a wild pick-off throw by Caleb Cotham allowed Randal Grichik to advance to second where he scored on a hit by Jedd Gyorko. Tony Cingrani turned in his best performance of the season with a 1-2-3 eighth. J.J. Hoover gave up two runs in the ninth. His hold on the closer’s job should be gone.

Out Of Position Before the Reds bats came alive, it looked like the game would turn on the misplay of a fly ball to center field by Scott Schebler. Billy Hamilton may be super frustrating at the plate, but he saves buckets of runs with his defense. Schebler’s error is the price paid when the Reds substitute for Hamilton to gain offense, especially if the replacement is not, you know, a center fielder, Jake Cave or Tyler Holt.Ã‚Â That’s also what happens when you put a player in a new position.Ã‚Â See: Eugenio Suarez (3B).

Here Comes the Cavalry Jon Moscot will be the first of many Reds players to join the team off the DL. He pitches for the Reds in tomorrow’s series finale. The new guys will help eventually, but it won’t happen overnight as they’ll need time to get back in form. Also worth remembering that Moscot has three major league starts.

First-person Coverage Wes Jenkins, our brilliant writer, sent this picture from the game. He swears it’s Adam Duvall at the plate. 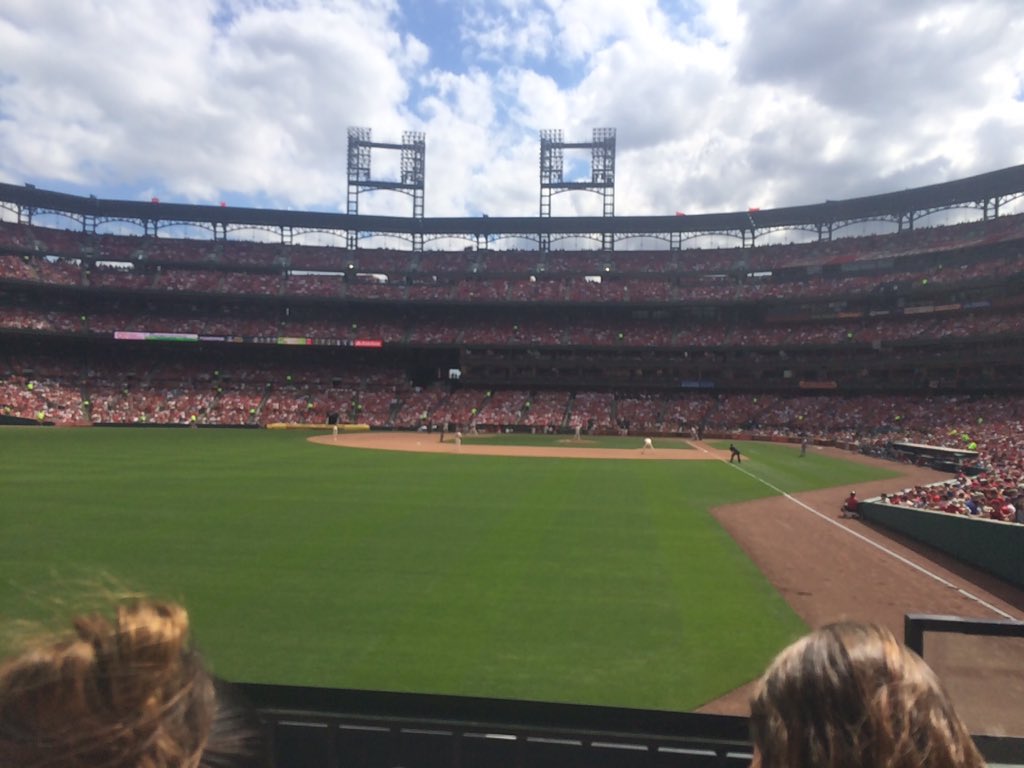