No, it’s not an off-day. That’s when we usually post the latest edition of NSRT, but with the way the Reds are playing these last couple of games, we kinda wish it were an off-day, right? I have a lot of dumb things on my mind, so let’s do this…

–The Reds’ bullpen is not good. That is all.

—Go watch this marble race right now. Pick a winner before the race. Trust me, you’ll be mesmerized. I can’t figure out why this was so exciting.

–I had a lot of fun writing this piece for Cincinnati Magazine in which I compared Eugenio Suarez to Todd Frazier since, you know, Suarez is trying to replace the Toddfather. A couple of things stood out when I started looking at these two guys (if you follow me on Twitter, feel free to skip ahead).

First, Suarez has been in the majors for parts of three seasons now, but he’s still younger today than Frazier was on the date he made his major league debut.

So be patient with Suarez. He’s still very young, and has plenty of room to improve. Which is great, since he’s already pretty darn good.

–Yes, Suarez is struggling with his glove so far. This is another area where I urge patience. He’s basically learning a new position on the fly, at the major league level. That’s not easy to do. Before this season, Suarez hadn’t started a game at third base since 2010, when he was 18 years old and playing in the Venezuelan Summer League.

–Not getting a whole lot of production out of Joey Votto yet. Are people starting to freak out? I can never tell.

(Not giving up on Mes. Far too early for that. But it’s been a long time since he’s been a real contributor to this team. I hope that changes soon.) 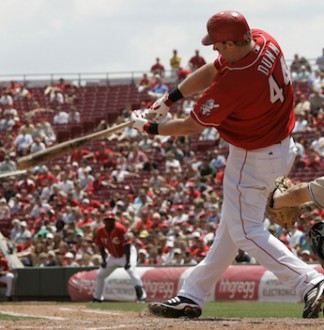 –Will Leitch is a Cardinals fan, and that’s hard to ignore, but I really enjoyed this piece on the old All-Star Baseball game. What I liked most was his discussion of sabermetrics and being a fan. It captured perfectly — I mean it, perfectly — my relationship with sabermetrics. I wish I had written those words.

–Tyler Holt has a slash line of .000/.000/.000, but has scored two runs. And every time I see or hear his name, I think of this (from the brilliant Arrested Development, if you aren’t familiar). Tyler Holt!

–I wish the Reds would cut Alfredo Simon and sign Jimmy Haynes. Or Eric Milton. What’s the difference, right? At least it would be a great story.

–Ross Ohlendorf leads the Reds in wins (2) and funky windups (1). Man, I love that 1920s-era windup Ohlendorf uses. The Reds should sign him to a billion year contract, just so I get to keep watching that delivery.

–I’m not a gamer by any stretch of the imagination, but I let a friend talk me into joining an online league in MLB: The Show 16. The game is fun, but I’m just awful. We did a full draft, I got Mike Trout, Johnny Bench, Joey Votto, Tom Seaver, Mike Schmidt, Johnny Cueto…and yet, my team is 0-5 to start the season. I can not figure out how to hit consistently to save my life. I’m the Pokey Reese of online gamers.

Anyone else play? Are you willing to tutor me?

–We talked about television last week, and I appreciate all the suggestions. I’m going to go with Mr. Robot first, I think. Also need to finish up Deadwood, and get caught up on Archer, and there’s a new season of House of Cards I haven’t gotten to. Then the new season of Game of Thrones begins soon. What’s the deal with Jon Snow? (Don’t answer that, please. Spoiler-free zone here.)

Also, Tyler Holt reminds me that I really want to go back and rewatch the entire run of Arrested Development. Just because.

There’s way too much television these days. Who has time to keep up? Especially during baseball season…

–The first use of OMG was in a letter to Winston Churchill in 1917. Really.

–Hey, I’d like to offer a huge thank you to everyone who donated during our recent fundraising drive (and everyone who purchases merchandise during phase two). This site has been a labor of love for over a quarter of my life (!), and I’m constantly amazed by (a) the thoughtful, talented writers who grace the digital pages of Redleg Nation every single day and (b) the incredible community of readers and commenters who make this place special. Thank you from the bottom of my heart.

We don’t come to you begging for money except during this brief fundraising period, because this isn’t a for-profit enterprise. I’ve lost money on RN over the years, and I’ll happily keep losing money. But every donation you make does help defray my costs in running the site (and we had to make some pretty big upgrades a couple of years ago in order to make the site run better) and, as Steve (who does such great work in keeping this site running from day to day) has said, to help us do nice things for this great group of writers that we have. The dollars you donate aren’t just going in someone’s pocket. They’re going to make this a better site.

So, this will be the last time I’ll talk about this since this portion of our fundraising period is over for 2016, but you can still click that “Donate” button on the right sidebar. Setting up a regular monthly donation of a buck or five (or whatever you think is appropriate, considering what you get out of the site) really helps us out. Or maybe buy some swag, and we’ll see if we can get a Redleg Nation get-together at GAB organized so everyone can wear their t-shirt and put faces to names.

And if you’re not in a position to donate, that’s fine too. I started RN as a place where serious Reds fans can get together to discuss our team in a thoughtful, respectful manner. That will remain the mission, and I need all of you to help make the Nation the best it can be.