Tonight was the 2016 home opener for the NL Central favorite Chicago Cubs.Ã‚Â  Brandon Finnegan did his best to send all those fans home in a bad mood, but the Reds bullpen (with an assist by manager Bryan Price) decided to be friendly to the Chicago faithful.Ã‚Â  Addison Russell’s home run in the 8th put the Cubs up 5-3 and they never looked back.

Finnegan pitched 6 2/3 no-hit innings.Ã‚Â Ã‚Â  His no-hit bid was broken up by David Ross with 2 outs in the bottom of the 7th inning on Finnegan’s 107th pitch of the game.Ã‚Â  He finished the night giving up 2 ER (more on that later) on 1 hit, walking and striking out 5.Ã‚Â  He was given a no decision.

Billy Hamilton hit his first home run of 2016.Ã‚Â  That’s pretty neat.Ã‚Â  It would be nice to see how Billy could do if he stopped wasting most of his time practicing from the unnatural left side of the plate.

Adam Duvall doubled (his 3rd in 2 days) and made a fantastic diving catch in the 1st inning.Ã‚Â  If early returns are any indication of future returns, the Duvall/Schebler platoon in left should be just fine this year and perhaps next.

Zack Cozart appeared to have some discomfort after his single leading off the game.Ã‚Â  He stayed in the game until the bottom of the 4th when he was lifted for Ivan DeJesus.Ã‚Â  Later in the game we found out it wasn’t his surgically-repaired knee causing the discomfort, but tightness in his right quad above his surgically-repaired right knee.Ã‚Â  Hopefully Zack will be OK with a little rest.

With the bases loaded, Chicago native Tony Cingrani was called upon to retire Jason Heyward and preserve the Reds 3-0 lead.Ã‚Â  After getting ahead of Heyward 0-2, Cingrani left a fastball in the middle of the plate and Heyward drove in two runs. Sometimes pitchers miss their spots, but missing in the middle of the plate in an 0-2 count is pretty poor.Ã‚Â  In the following inning, Cingrani only retired one of the three batters he faced, putting the tying and go-ahead runs on base for Jumbo Diaz. What could go wrong?

Diaz gave up a home run to Addison Russell on his first pitch in the game.Ã‚Â  Relievers are going to give up home runs sometimes, but given the timing and how the night played out, I had to put Jumbo in “The Bad” section.

In the 7th, Brian Price called for a sacrifice bunt with Duvall on 2nd and Finnegan at the plate.Ã‚Â  Finnegan has safely hit in both his starts this year, perhaps alluding to a decent batting ability for a pitcher.Ã‚Â  Assuming the sacrifice was successful, the bunt would lower run expectancy for the inning from 1.10 to 0.95.Ã‚Â Ã‚Â  Since sacrifices aren’t always successful, that has to be weighed in.Ã‚Â  A poor decision, in my opinion, by Price.

While Finnegan was struggling to maintain control of his no-hit bid in the bottom of the 7th inning, the bullpen was devoid of action.Ã‚Â  Knowing that Finnegan would likely need to be pulled quickly, Price should have had a replacement warming and ready to go.Ã‚Â  Instead, Price waited until Finnegan gave up a hit, causing Finnegan to pitch to an additional batter who he promptly walked on 4 pitches.Ã‚Â  That runner would eventually come around to score.

Caleb Cotham was called in to relieve Finnegan.Ã‚Â  He only faced one batter, Dexter Fowler, and walked him.Ã‚Â  Here is what PITCHfx has to say about that pivotal walk: 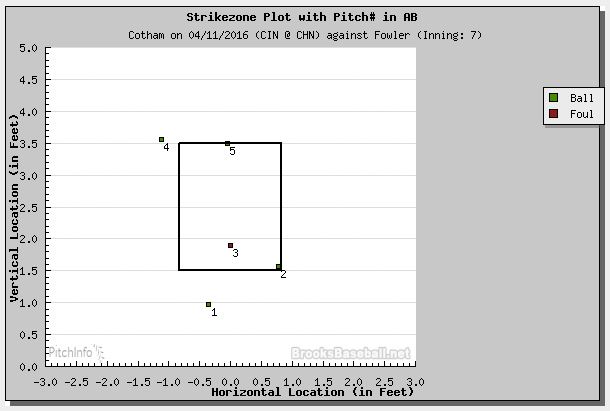 Looks to me like Cotham should have gotten at least one of those two calls.Ã‚Â  Instead, he got neither.

In the 9th inning, Hector Rondon struck out Scott Schebler looking to end the game.Ã‚Â  About that… 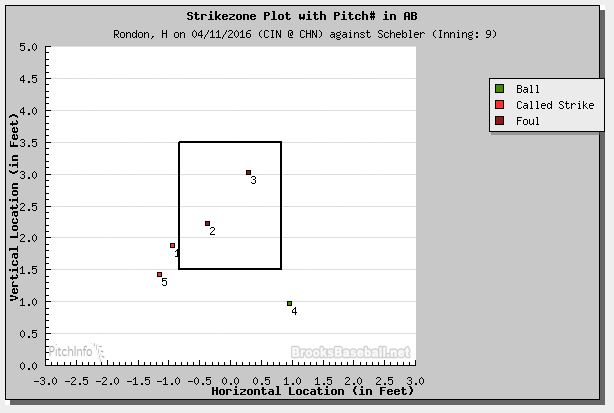 Perhaps home plate umpire John Tumpane had some Giordano’s pizza waiting on him in the clubhouse.

Billy Hamilton’s home run left the bat at 96mph.Ã‚Â  That is a good illustration of how trajectory is far more important than raw velocity. For reference, Brandon Finnegan’s single was hit at 99mph.

Votto’s singles were rocked at 104mph and 103mph.Ã‚Â  His slow start might have some fans worried, but rest assured, there is nothing wrong with Joey Votto.

Perhaps the best silver lining from this tough loss is that Billy Hamilton gave us a gift that will keep on giving: