The Cincinnati Reds are 5-1, and are in first place in the NL Central. The Reds completed as fun of a week of baseball as anyone could have possibly imagined.

The 37 pitch first inning would limit Melville’s debut to just four innings. Melville only allowed one run on the day, despite allowing nine baserunners in the four innings.

Eugenio Suarez continued his torrid start to 2016 with a solo home run in the sixth inning to tie the score at one. Suarez already has four home runs through the first six games.

There was a huge play in the eighth inning. Adam Duvall threw out Josh Harrison at home to end the inning (Mesoraco made a great tag, and had great positioning). The play was reviewed, and Harrison was confirmed out. That kept the game tied at 1.

The Reds bullpen was huge. They pitched five shutout innings. That set up a chance for a walkoff in the ninth. Brandon Phillips lead off the inning with a single. Two batters later, Jay Bruce stepped to the plate. The guy who wasn’t even supposed to be a Red in 2016, delivered a walkoff double to give the Reds a 2-1 victory. 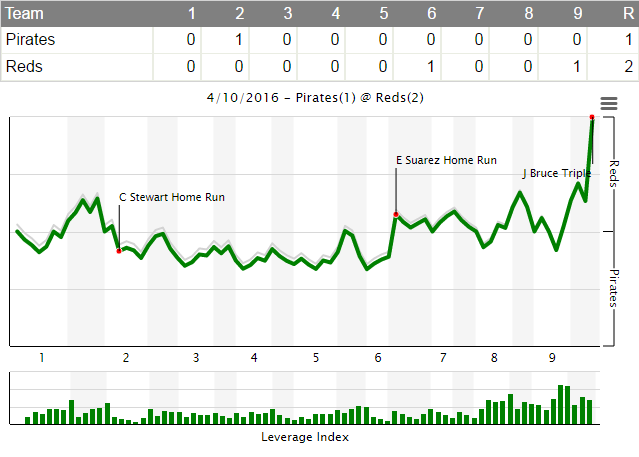 According to FangraphsÃ‚Â WPA statisticÃ‚Â (winning percentage added), the most important play of the game wasÃ‚Â Jay Bruce’s RBI walkoff triple in the 9th inning, scoring Brandon Phillips. Reds win 2-1.Ã‚Â That play increased the Reds chances of winning by 36.7% (from 63.3% to 100.0%)

SuarezÃ‚Â has been incredible through the first six games. He already has four home runs, and is hitting .435/.500/.957. Todd who?

Adam DuvallÃ‚Â had two hits. The platoon of Duvall/Schebler has been good so far for the Reds. Duvall has a 141 wRC+ and Schebler has a 115 wRC+. 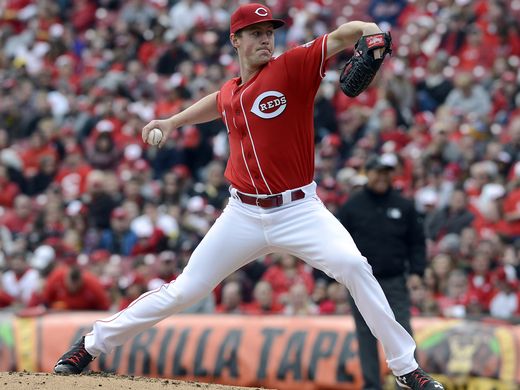 Tim MelvilleÃ‚Â was far from perfect, but he did a nice job after a shaky start. You won’t be very successful in the big leagues walking four batters and only lasting four innings, but he kept his composure and helped the Reds stay in the game. Melville got some very timely strikeouts. His final line: 4.0 IP, 5 H, 1 ER, 4 BB, 5 K.

TheÃ‚Â Reds bullpenÃ‚Â was nails. They threw five shutout innings today.Ã‚Â Dan StrailyÃ‚Â was especially impressive, as he didn’t even allow a hit in three innings (1 BB, 3 K). The Reds pen has been surprisingly good through the first week of the season.

The Reds had some very niceÃ‚Â defensiveÃ‚Â plays today. Adam Duvall threw out a runner at home, and Jay Bruce made a great recovery on a ball hit off his glove in the 9th, and was able to hold David Freese to a single off the wall.

Chris StewartÃ‚Â hit a solo home run in the second inning off Melville. Stewart hadn’t hit a home run since 2013. He played in 107 games in 2014-15. Baseball can be a brutal game. 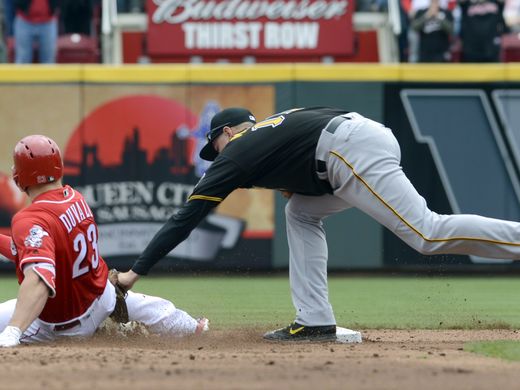 There was some really bad baserunning byÃ‚Â Adam DuvallÃ‚Â in the second inning that cost the Reds. Duvall smoked a ball off the wall in the second inning. Jay Bruce was on first base, and third base coach Billy Hatcher held Bruce at third. Duvall apparently didn’t see that Bruce was held and kept running past second base, and on to third as the ball was thrown home. Duvall couldn’t get back to second in time, and was thrown out. If Duvall had stopped at second, the Reds would have had 2nd & 3rd with 0 outs. The pitcher Tim Melville was up next, and he struck out. The Reds ended up not scoring in the inning. (Some might say it was on Billy Hatcher for putting up a late stop sign, but I don’t think it was on him).

Joey VottoÃ‚Â is really struggling to start 2016. He grounded into two double plays today. Votto is hitting .174/.269/.174. I wouldn’t worry too much about our hero though. He’ll get it going soon, and when he does…watch out.

Today is the first time Joey Votto has had 3 one-pitch outs in his career.

The Reds could be 6-0 if not for that grand salami that Mr. Hoover gave up on Friday night. Could you even imagine?

The Reds will head to Chicago for a three game (all night) series against the Cubs. Tomorrow will be the Cubs home opener. The two teams will take the day off Tuesday, and finish the series Wednesday and Thursday.