The Reds undefeated season came to an end last night. The Reds dropped a heartbreaker 6-5 on a cold, rainy night at GABP. The Reds had a 5-2 lead going into the 8th inning. J.J. Hoover came in with two outs and the bases loaded in the 8th, and gave up a grand slam to Starling Marte.

The Reds will look to get back to their early season winning ways today. They will have the right guy on the mound, Raisel Iglesias. He will have his work cut out for him, as he will be facing the Pirates ace Gerrit Cole.

ProgrammingÃ‚Â Note: Today’s game is the MLB.tv free game of the day. You can watch the game here.

Yup, this should be a fun pitching matchup.

Raisel Iglesias pitched very well on opening day for the good guys. Iglesias allowed a cheap GABP home run in the second inning, but settled down afterwards to pitch six innings of two run baseball. Maybe most impressive was that Iglesias had 7 strikeouts, and didn’t walk a batter.

Cozart and Mesoraco are both out of the lineup again. Bryan Price said he will be easing them into 2016, so giving them a day off after a night game is fairly normal. I’d expect both back in the lineup tomorrow. Billy Hamilton moves from the #9 spot to the leadoff spot. The Pirates have the same lineup as yesterday.

The Reds announced that Tim Melville will start tomorrow. The Reds thought it would be DeSclafani tomorrow, but the Reds are being cautious with him. Melville will be making his MLB debut tomorrow. He was a 4th round draft pick back in 2008. He has a career 4.75 ERA in 668.2 innings in the minors.

Reds' Melville to start Sunday for DeSclafani https://t.co/tWooiY4jE1 via @enquirer 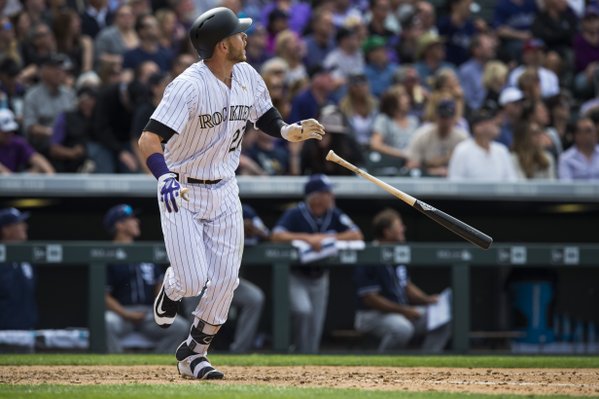 In case you haven’t been able to pay attention to the rest of baseball, here are some of the big storylines in the first week:

— Colorado Rockies rookie Trevor Story is off to an incredible start. He has 6 home runs through the first 4 games! (Video)

— The new second base slide rule has a major impact early in the season. There have been two occasions where the game has ended on a reviewed double play. It happened in the Astros-Brewers last night (Video), and in the Rays-Blue Jays on Tuesday (Video)

— The Cubs got terrible news yesterday. Kyle Schwarber will be out for the year with an ACL injury. The Cubs depth will be challenged right from the beginning of 2016.

Winning is much more fun than losing. I didn’t really like yesterday. Let’s get back to winning Redlegs, ok? Go Reds!