Before we dive into this week’s post,Ã‚Â I wanted to give a quick synopsis of what the column is all about for anyone who may have missed the first one a couple of weeks ago. Every week this season, the plan is to discuss and analyze a different Reds pitcher in an organization overflowing with talented arms. As the title “Kill the Win” might suggest, I’ll do this using stats more indicative of the player’s true talent than more traditional statsÃ‚Â like wins andÃ‚Â losses.

With that in mind, the pitcher we’ll be talking about this week is none other than the Reds’ 2015 stalwart, Anthony DeSclafani.

In a year full of roster turnover, DeSclafani was the only constant on the Reds’ pitching staff. After coming over from the Miami Marlins in the Mat Latos trade in the winter of 2014, he won a starting spot as a rookie and was the only pitcher to stay in the rotation for the entire season. “Disco” started off 2015 on fire, posting a 1.04 ERA in the month of April. That was never going to last, however, as his expected fielding independent pitching (xFIP) of 4.44 indicated he didn’t pitch quite as well as it appeared. Additionally, his .174 batting average on balls in play (BABIP), while impressive, was unsustainable.Ã‚Â The right-handerÃ‚Â fell back to earth over the next followingÃ‚Â months, seeing his walk rate jump from 9.7 from May to July, while posting an xFIP of 5.19, 4.16 and 4.51, respectively, in those months.

From there, however, he had his best two months of his season. An initial look at his splits in August and September/October may leave you saying, “What is this guy talking about?” After all, his ERA was 4.59 and his WHIP was 1.36.

But a closer look paints a much prettier picture. In August, Disco’s xFIP was 3.05, a far cry from his 4.20 ERA. In September and October, his ERA was an ugly 4.93, but his xFIP was even better at 2.92. Why was there such a discrepancy? There are a couple of different reasons.

The first is that he was flat-outÃ‚Â unlucky. Similar to his performance in April, his results had a lot to do with an unusual BABIP. This time, that number was abnormallyÃ‚Â high instead of abnormally low. In August, batters had an average of .400 (!) on balls they put in play against DeSclafani.Ã‚Â The September number dipped a bit to .365, but that was still above the norm. Some of that had to do with seeing a slight uptick in hard-contact percentage (as measured by Fangraphs) in those months, though it wasn’t enough to account for such aÃ‚Â ridiculousÃ‚Â BABIP.

The second reason for the difference between his ERA and the underlying numbers is that his strikeout numbers climbed, while his walks decreased considerably. Through the first four months, DeSclafani struckÃ‚Â out 16.8 percent of the hitters he faced and walked 9.0 percent. In the final two months, he saw his K%Ã‚Â jump to 23.9 percent, while his BB%Ã‚Â decreased to a measly 3.3 percent as he walked only nine batters.

Two months is a relatively small sample size, but if the 25-year-oldÃ‚Â can put up those kinds of numbers in 2016 — paired with some better luck — he could be in store for a breakout sophomore season.

A big reason for DeSclafani’s success is his command of the strike zone. In 2015, he threw a first-pitch strike 62.8 percent of the time, ranking 26th among 78 qualified pitchers.Ã‚Â His 7.0 BB% ranked a more mediocre 41st, but was still a respectable number. If hisÃ‚Â career minor-league rate of 5.4 BB% is any indication — and his August and September numbers show that it very well could be — he should improve in bothÃ‚Â areas moving forward.

When it comes to his stuff, Disco doesn’t have tons of different arm anglesÃ‚Â likeÃ‚Â Raisel Iglesias, but he does have a solid pitch repertoire to help him get outs. Last season, DeSclafani’s go-to offerings were his four-seam fastball, sinkerÃ‚Â and slider. He also has a changeup that he mixed in here and there, as well as a curveball that really began looking like a plus pitch toward the end of the season.

In terms of results, his slider is his best pitch, thrown at a fairly high average velocity of 86.8 mph, according to PITCHf/x data. Although the pitch doesn’t generate a ton of movement, evidenced by a lower-end spin rate of just 738 rotations per minute, DeSclafani generated a whiff on his sliderÃ‚Â 17.9 percent of the time he threw it.Ã‚Â When hitters did get ahold of it, they hit just .238/.267/.367 against it. Of his team-leading 151 strikeouts, hisÃ‚Â slider was the putaway pitch on 77 occasions.

While theÃ‚Â slider proved to be his top pitch for the entirety of the season, Disco’sÃ‚Â curveball made huge strides during the last two months of the season, as the Cincinnati Enquirer’s Zach Buchanan noted this spring. When he started to get a feel of the curve by using a “spike grip” with his index finger — making it more of a knuckle-curve — he started throwing it more often (as you can see below on the chart, via Brooks Baseball), and with great results. 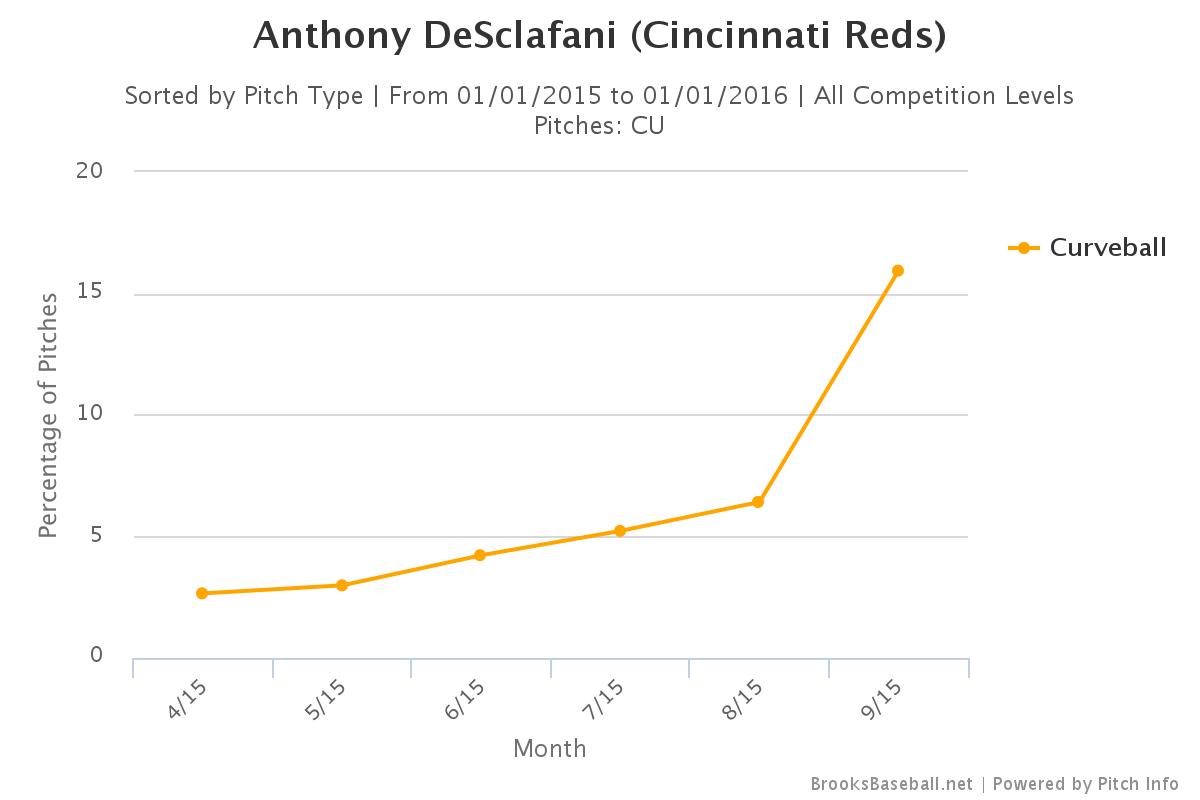 With increased spin rates resulting in more movement on the pitch, DeSclafani saw a whiffÃ‚Â rate of 12.5 percent in August and 19.4 percent in September, which is when he started throwing the pitch far more than he had previously. If his September rate was maintained for the whole season, it would’ve been his best swing-and-miss pitch. When the pitch was put in play, it resulted in ground balls a whopping 80 percent of the time, this after not generating a single ground ball on the pitch before the final month of the year. That isn’t a rate that could be sustained, but it shows the progress his curveball made.

Like just aboutÃ‚Â every other pitcher in the world, DeSclafani’s four-seam fastball was his most-used pitch. It’s not an offering that will blow anyone away, but it gets the job done at the end of the day.Ã‚Â The fastball’s mediocre spin rate of 2,091 rpm was the likely cause ofÃ‚Â a relatively low 4.1 percent swing-and-miss rate and a ground-ball rate of just 37.5 percent. (A higher fastball spin rate tends to result in more strikeouts, while a lower spin rate results in more ground balls.) However, being able to locate the pitch withÃ‚Â a velocity that could reach up to 96 mph on the radar gunÃ‚Â probably played a role in batters hitting a run-of-the-mill .263/.318/.410 against it.

Many consider DeSclafani’s ceiling to be right about where he was last season, or slightly better. That is, a solid, middle-of-the-rotation innings-eater. If he wants to bring his ceiling even higher, building on the success he had with his curveball at the end of his rookie year will be a key.

With the hook coming along, Disco’sÃ‚Â changeup is the pitch that could use the most work. It has a higher-end spin rate (1,675), meaning the bottom isn’t dropping out much and, as a result, he’s not getting many swings and misses (9.1 SwStr%) or ground balls (37.2 GB%). With the development of his curve as his go-to offspeed pitch, we may not see him throw a change all that much in the future, but it will be something to keep an eye on.

The second-most used pitch for DeSclafani was his sinker, which also has room to get better. The offeringÃ‚Â proved to be quite hittable, with battersÃ‚Â posting an average of .322 and an OPS of .842 when they put it in play, the highest marks off ofÃ‚Â any of his pitches. However, the spin rate (1,941 rpm) heÃ‚Â puts on the pitch — which ideally tends to be lower than a four-seamer in order to cause more grounders — was below league average according to Statcast, leading to a healthy 54.1 GB%. Improving theÃ‚Â command of his sinker, particularly versusÃ‚Â left-handers (who hit .375 against it), would go a long way for DeSclafani.

Although the results weren’t there, the way DeSclafani threw the ball in the final two months of the season should give the Reds reason to be hopeful that he can take another step forward in 2016 after an overall solid rookie campaign. If his curveball continues to develop, it can become a plus putaway pitch next to his already-solid slider, and the strikeout numbers he produced at the end of 2015 could very well be maintained in the long run. Add in the superb control he showed down the stretch, and he could be a candidate for aÃ‚Â breakout year when he returns from a strained oblique. Even if he doesn’t develop into a top-of-the-rotation arm,Ã‚Â Disco showed last year that he has all the makings of a reliable No. 3 or 4 pitcher for many years to come.