Supposedly the Reds are entering a bit of a “youth movement.” Bryan Price first uttered that phrase on June 6 of last season, sending the fanbase into a tizzy expecting mid-summer trade after mid-summer trade.Ã‚Â It just didn’t quite happen that way.

Sure, Johnny Cueto was sent to Royals for three strong propects and Mike Leake went to the Giants for another two, but other than an August cash-dump of Marlon Byrd, the “youth movement” just kind of puttered through the summer doldrums. Jay Bruce, Todd Frazier, and Brandon Phillips all made their homes in the Queen City by season’s end. Two of those names still do as of Opening Day 2016, which made me wonder: Are the Reds really in the midst of a youth movement at all?

After breaking down the Opening Day roster (noticeably missing the movement’s centerpiecesÃ‚Â Jose Peraza and Jesse Winker as well as Anthony DeSclafani and Michael Lorenzen), I found that the Reds are absolutely, 100 percentÃ‚Â indeedÃ‚Â trending towards a young man’s game. 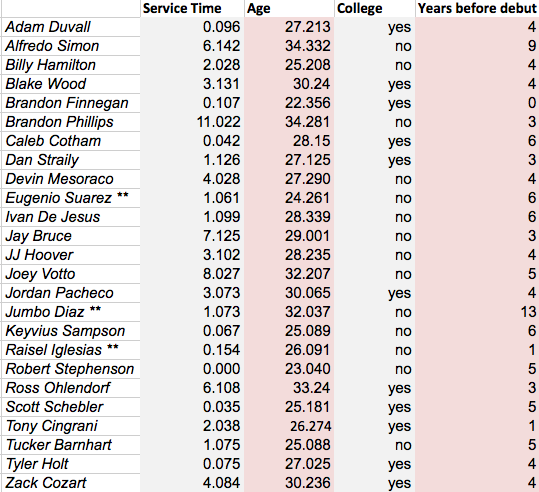 Alfredo Simon is the club’s elder statesman at 34 years and 332 days of age, with Brandon Phillips only 51 days behind. Phillips, however, takes the cake in terms of MLB service time with 11.022 seasons under his belt. Robert Stephenson obviously has the lowest service count as he never made an appearance on the 25-man before Monday, but Brandon Finnegan is the youngest at 22 years and 356 days.

A quick explanation of service time provided by FanGraphs:

Service time is exactly what it sounds like; the number of years and days of major league service a player has in their career. Typically, itÃ¢â‚¬â„¢s written as Year.Days, so we would express a player with four years and one hundred and fifteen days of service time as 4.115. You earn a day of service time for every day you are on the 25-man roster or the major league disabled list during the regular season. If youÃ¢â‚¬â„¢re called up on June 22 and youÃ¢â‚¬â„¢re sent down after June 28, youÃ¢â‚¬â„¢ve earned seven days of MLB service. Your team doesnÃ¢â‚¬â„¢t have to play a game for you to accrue a service day.

In the above graphic, age works the same way as service time, where the decimal is a number of days and not a percentage of a year. Given that variable format and theÃ‚Â lack of a pre-existing dataset for either of those variables, and it became clear to me thatÃ‚Â this data would only be compiledÃ‚Â for the National League. Forgive me for not doing so, but putting together theÃ‚Â data for the American League would’ve pushed this post far, far past deadline.

But alas: for comparison’s sake we still have the Senior Circuit where, surprisingly, the Reds are first in something. Not only do theÃ‚Â RedlegsÃ‚Â have the lowest average service time of allÃ‚Â National League teams, but they alsoÃ‚Â claim the third lowest average age of any team. And as I said above, these numbers don’t even include a good number of the young guys expected to make an impact this year but currently reside on the DL. The team is trending young for sure, but more interestingly, they’ve left the usual assortment of gritty veterans behind.

No surprises that the Phillies are the second most inexperienced team; after all, having no aspirationsÃ‚Â for a championship allows a teamÃ‚Â to try new things. The only truly puzzling entry on thisÃ‚Â list is the Braves–they have no chance to compete in 2016 so why continue to play the same old guys?

Answer: The Braves have the best farm system in the MLB (according to Keith Law at least). With the new generation about to take the reins, the Braves can afford to goÃ‚Â a year with older, stopgap players and hopefully luck intoÃ‚Â a trade chip or two in the process.

Looking at the age chart, the immediate takeaway is: What the heckÃ‚Â is going on in Arizona? The Diamondbacks average age is a full year younger than the secondÃ‚Â youngest Phillies. You would have to go to the ninth ranked Cubs to find an equivalent gap between the Phillies and another club. As such, the D-backs only have four players over 30 but have a whooping 10 players 25 or younger.

The Reds meanwhile are the young guns of the NL Central, but the Cardinals are close behind. With a good portion of the aging core set to retire, there’s a decent chance that the Cards could be rejuvenated and rebuilt before they even take a faltering step. 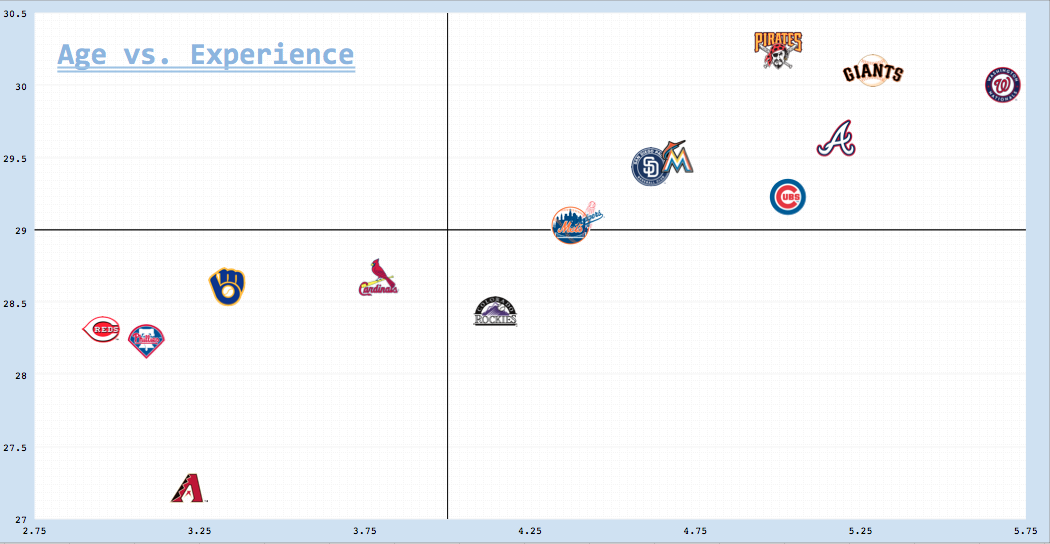 Put it all together, and I would say the Rockies are in theoretically the best place–a mix of young but experienced talent. However, the case can easily be made for either the Cardinals, the Mets, or the Dodgers as having the ideal composition of players.

All of which should be taken with a grain of salt of course because these are just the Opening Day rosters. Core guys are on the DL, prospects are warming for two weeks in the minors, and random free agent signings are lingeringÃ‚Â for nowÃ‚Â before they will beÃ‚Â unceremoniously DFA’d come May. Opening Day is but an arbitrary landmark in a season filled with turnover and uncertainty.

Yet still, my curiosity wasÃ‚Â not satiated, so I looked into the breakdown of players going pro after high school or college (or signing internationally as was often the case) and how long it took players to get their first taste of the Show. The latter variable was a restructuring of a “years spent in the minors” venture that led to nothing but heartache, rehab assignments, and journeymen who somehow spent more time on the farm than years they had been alive.*

*Only a slight exaggeration. 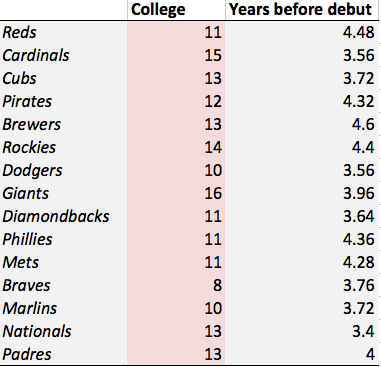 College: # of players who spent some time playing at the college level Ã‚Â  Ã‚Â Years before Debut: average # of years between signing and debut

On average, half of a National League roster is composed of players who spent sometime playing college ball, with the other half being high school draftees or international signees. The Reds carry 11 college players, 11 high schoolers, and 3 international signees, not distinguishing themselves in any way from the average. Shockingly considering their age composition, the Braves carry the fewest college players with eight. Despite the easy logical jump, there doesn’t seem to be any correlation between the amount of college players on the 25-man and relative age of the roster.

As for years before debut, since most of the players on each team’s roster were not developed by that team, the variable means next to nothing. With that being said, the Reds do have the second highest value with a 4.48 average (boosted in no small part by Jumbo Diaz), so kudos (bollocks?) to the hometown team.

Going forward, the world will continue to spin, and these numbers will become obsolete as you read them (they are based on Tuesday’s calendar after all). There’s nothing more disheartening than spending hours creating a dataset that’s useless not butÃ‚Â one day later.

For the Reds, the numbers are still promising as they give credibility to the push the front office is making. Gone are the days of management talking of a youth movement but never acting on it. This year, the kids have arrived.

All data and information taken from Baseball-Reference or Baseball Prospectus.Ã‚Â