A few weeks ago, I, along with eleven other baseball nuts, created a dynasty fantasy baseball league meant to last for five years. Now, the idea behind the league was to draft once and never again. It would be a dynasty league in the truest sense of the word. I say this because a five-year dynasty league values one thing: highly productive players already in their prime or about to hit it.

This past Sunday, we held our inaugural (and only) draft. While drawing any sort of inference from the fantasy baseball draft of twelve college-aged baseball nerds is a ludicrous concept, IÃ¢â‚¬â„¢m still going to do it. In the first 100 picks, the Cubs had the most players selected. The same for the first 50. In the first 20, only the Astros bested them. 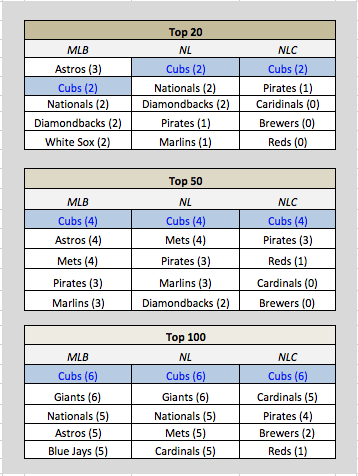 Is one fantasy baseball draft an exact science? No, of course not, but it is worth a look at how exactly the Cubs came about their current stockpile of talent.

On October 22, 2011, Theo EpsteinÃ¢â‚¬â€then general manager of the Boston Red SoxÃ¢â‚¬â€resigned his post to take the job of CubsÃ¢â‚¬â„¢ president of baseball operations. Upon arrival in Chicago, Epstein inherited what Fangraphs considered the 22nd best system in the league, highlighted by canÃ¢â‚¬â„¢t-miss prospects such as Brett Jackson, Trey McNutt, and Chris Carpenter (not that Chris Carpenter). The team had just drafted Javier Baez the previous summer, but all in all, the outlook on the farm was pretty abysmal. Even Chris Carpenter, the teamÃ¢â‚¬â„¢s number three-ranked prospect, was lost soon after EpsteinÃ¢â‚¬â„¢s hiring when the Cubs shipped the pitcher to Boston as compensation for Epstein himself.

To say Epstein built this current iteration of Cubs from the ground-up might actually be underselling the feat he accomplished. The Cubs were well into the process of digging themselves a grave under the cellar of the NL Central when Epstein took over, and after hitting rock bottom that season, it was a steady climb followed by one strong leap to the top.

So how did he do it? Well, first, not all the credit can go to Epstein. While he was the architect behind the Cubs massive overhaul, he needed some help. Hiring Jed Hoyer from San Diego to be his GM and Jason McLeod from the Red Sox to be his head of scouting and development, Epstein had the infrastructure in place to massively overhaul the CubsÃ¢â‚¬â„¢ system.

Over the next three seasons, Epstein made smart trades, implemented a doable draft strategy, and targeted high-value free agents (both on the field and in trade value). 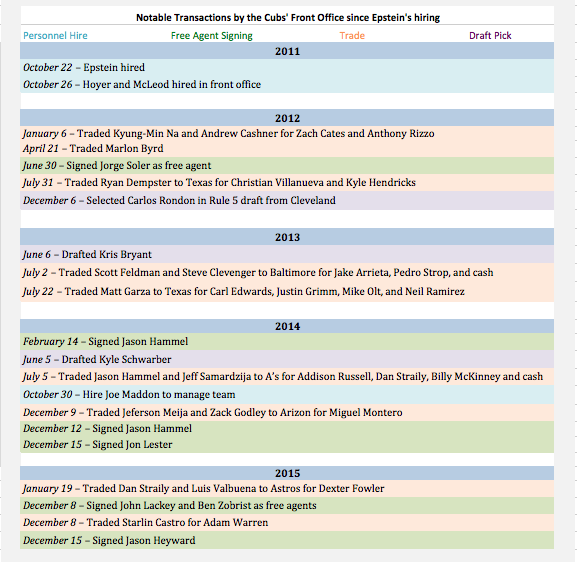 Take the deal for Arrieta for example. Half a season of Scott Feldman and a B-level prospect in Steve Clevenger got the Cubs the future NL Cy Young winner, a lockdown reliever in Pedro Strop, and some cash to boot. While giving the CubsÃ¢â‚¬â„¢ personnel all the credit in evaluating what Arrieta could become is a stretch, Epstein still assembled the team that saw value in the pitcher.

Before the 2014 season, ESPN did a profile of Epstein, hoping to answer the question of how he could remain so calm amidst the storm that were the miserable 2012 and 2013 seasons.

The answer reveals the underlying success factor driving EpsteinÃ¢â‚¬â„¢s tenure at the helm: modernization. By outfitting the organization from the scouts to the analysts and everyone in-between with the latest technology, Epstein and the Cubs have been able to exploit the simplest form of power.

When the Cubs hired him away from the Red Sox, Epstein was marketed as a new-age, SABR guy high on analytics and low on old-school technique. While that is accurate to a degree, Epstein isnÃ¢â‚¬â„¢t interested in convoluted stats just for the sake of convoluted stats. He is simply seeking any new information that can give him a leg up, and guess what, itÃ¢â‚¬â„¢s working.