The arrival of the 2010 season generated plenty of excitement for fans of the local ball club. All-Star talent was deployed across the field, from youngsters Joey Votto and Jay Bruce to veterans Scott Rolen and Brandon Phillips.Ã‚Â Four-fifths of Dusty Baker’s rotation had been settled. Aaron Harang, Johnny Cueto, Bronson Arroyo and Homer Bailey would inaugurate the season in that order.

A pitched battle (heh) for the fifth rotation slot between rookies Mike Leake and Travis Wood had played out during spring training. Reds general manager Walt Jocketty decided to put Leake on the Opening Day roster. Leake, with ragged blonde hair and scruffy beard, had been drafted out of Arizona State as a college junior the previous summer. He had won the National Pitcher of the Year award (Stephen Strasburg had been another finalist). 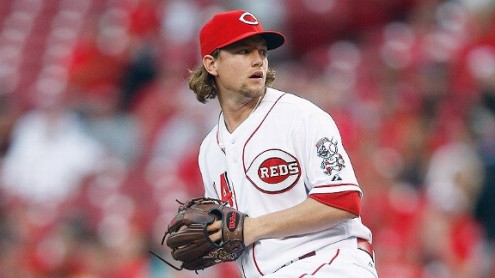 Mike Leake pitching on April 11, 2010 against the Cubs

Mike Leake debuted for the Reds at Great American Ball Park on April 11, the team’s sixth game of the season. Leake made his second start five days later on April 16.

I can attest that April 11 was a bright Sunday afternoon at the ballpark. Sparkling new Mike Leake pitched well and the Reds beat the stupid Chicago Cubs 3-1.

How do teams decide when to call-up their top prospects?

Many factors play a role. The framework established in the collective bargaining agreement (CBA) between MLB and the MLB PlayersÃ¢â‚¬â„¢ Association structures the options. Ideally, clubs would promote a player when it’s best for Ã‚Â his career. A second reasonable concern would be when it would most help the major league team win. Teams often offer plausible development-related pretexts for delaying a debut. Perhaps the player needs more minor league experience and instruction. Possibly calling the player up too soon might injure his confidence.

The harsh reality is that the calculation is dominated by two factors: time and money.

Service time is the number of years and days a player has spent on the 25-man roster of a major league team or major league disabled list during the regular season. Example: If a player gets called up for a game on July 1 and sent back down to the minors after the game on July 8, the player has earned eight days of MLB service time. The player doesnÃ¢â‚¬â„¢t have to get on the field for it to count and off-days in between count as service time as well.

Service time is usually written as (Years.Days). Example, a player with two years and 21 days would have 2.021 service time.

Now, back to the six-year rule. Note it says six full years of service time must accrue before a player becomes a free agent. There’s no rounding up. That means if a player ends a season at 5.170 (five years, 170 days), he is still under team control the entire next season.

In a sense, itÃ¢â‚¬â„¢s misleading to say a team has six years of control over a player. If the club takes the modest step of delaying the big league debut of a player for 11 days into his first season, it is impossible for that player to accrue a full year. Functionally, itÃ¢â‚¬â„¢s more accurate to think of team control as seven years.

The situation the Cubs faced with Kris Bryant last year exemplifies this choice. It was obvious during spring training that Bryant was the best third baseman in the Cubs system and on merit he deserved to be in their Opening Day lineup.

But the Cubs waited until Friday, April 17 to call up Kris Bryant. His service time currently reads 0.171. Because of those 11 days of patience, the Cubs pushed their superstarÃ¢â‚¬â„¢s free agency year from 2021 to 2022, gaining an entire season of his services.

Extending the effective number of seasons of team control is the time advantage of delaying a playerÃ¢â‚¬â„¢s debut. ThereÃ¢â‚¬â„¢s another tangible benefit as well: money.

The collective bargaining agreement governs how player salaries are determined during that six-year (or seven-year) window and those rules further influence the incentives for when a player gets called up.

CBAÃ‚Â basics: Until he has accumulated three full years of service time, a player has no power to determine his salary. That means, with few exceptions, they receive the league-wide minimum salary set by negotiators in the CBA. That number will be $507,500 in 2016. Teams offer modest raises for second- and third-year players.

After a player accrues 3 full years of service time, he earns arbitration rights. If the player (through his agent) and team canÃ¢â‚¬â„¢t negotiate a salary, the player has the right to have an arbitration panel get involved.Ã‚Â Generally, good players have three years of pre-arbitration salary and three years of salary determined with arbitration rights. Players typically see a large increase once they have earned the right to arbitration. Mike Leake, for example, earned $507,500 in 2012 his final pre-arb season. His salary in 2013 jumped to $3,060,000.

There is, however, a major exception in the CBA to the three-full-year requirement for arbitration Ã¢â‚¬â€œ called Super Two Ã¢â‚¬â€œ and it dramatically influences the calculation of when a player is called up to the major leagues.

The Super Two rule often incentivizes organizations to hold players in the minor leagues for the first couple months of a season to make sure he doesnÃ¢â‚¬â„¢t fall into the top 22% for that year.

Important: This incentive for delay is about money, not time. Super Two players still fall under the same service time rules (six full years before free agency). But they are eligible for arbitration for four of those years instead of three. That means more money in year three, a bonus that compounds the next three seasons based on percentage increases on a larger base.

For example, the Reds called up Jay Bruce on May 27, 2008, which was not quite enough of a delay in his service time to avoid Super Two status. The Reds right fielder became eligible for arbitration in 2011 as a Super Two with service time of 2.125 and earned $2.8 million instead of $450,000.

ThatÃ¢â‚¬â„¢s how delaying call-ups until June or July can save the organization money.

If the Reds had simply skipped Mike Leake’s April 11 start and instead delayed the pitcher’s call-up until April 16, he would have remained under Reds control through the 2016 season. That’s right, the head-scratching decision to have rookie Mike Leake pitch 6.2 innings on April 11, 2010 cost the Reds 200+ innings – an entire season – of veteran Mike LeakeÃ¢â‚¬â„¢s service.

Hypotheticals abound. If Leake’s service time read 5.171 instead of 6.000 – a difference of one day – he, not Raisel Iglesias, would be the Opening Day starter. The Reds might finally get around to honoring Leake with a bobblehead night. And the front office wouldn’t need to consider Robert Stephenson for a startÃ‚Â next week. 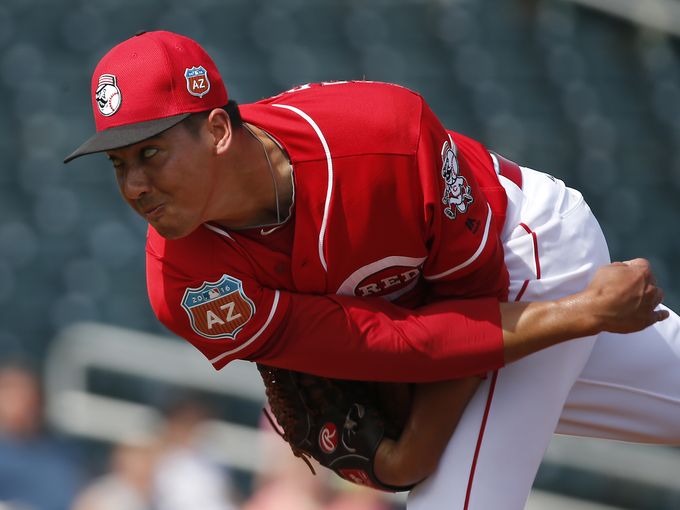 Under that scenario, where the Reds had controlled Mike Leake in 2016, there’s no guarantee the front office still wouldn’t have looked to trade him last summer. But if they had, with the extra year of service attached, the return would have been substantially higher.

Major league organizations make crucial debut decisions about their top prospects every year.Ã‚Â The Cincinnati Reds face that quandary anew in 2016 – in triplicate – as the baseball destinies of Stephenson, Cody Reed and Jesse Winker hang in the balance.Ã‚Â The Reds’ mishandling of Mike Leake’s promotion in 2010 throws an unflattering spotlight on how those choices can backfire. 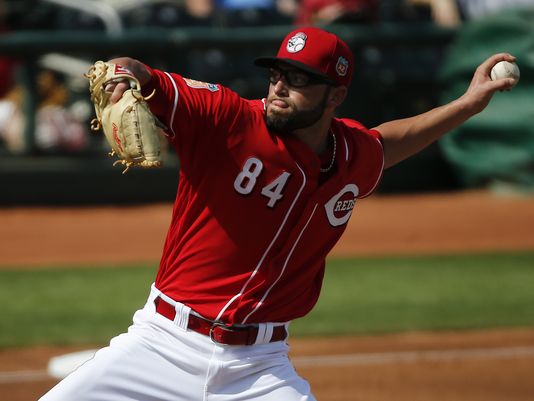 At the extreme, youÃ‚Â could make the case that having a great position player like Kris Bryant on the major league roster for an extra 11 days might make a big difference in the standings at the end of the season. But that argument collapses in the case of a pitcher, where only one April start is at issue. And the Reds don’t need to be basing decisions on small changes in their 2016 win-loss record.

The good news is that teams can pause service time clocks once they start. If the Reds decide to use Robert Stephenson (or Cody Reed) as an emergency starter during the first week of the season, the organization can mitigate the cost in time and money by promptly sending the player back to the minor leagues. Although the more time a player spends with the big league club in an emergency role now means that much longer of a debut delay otherwise. For each of Stephenson, Reed and Winker, legitimate development reasons can be made to keep them in Louisville for a while longer. None are Kris Bryant. 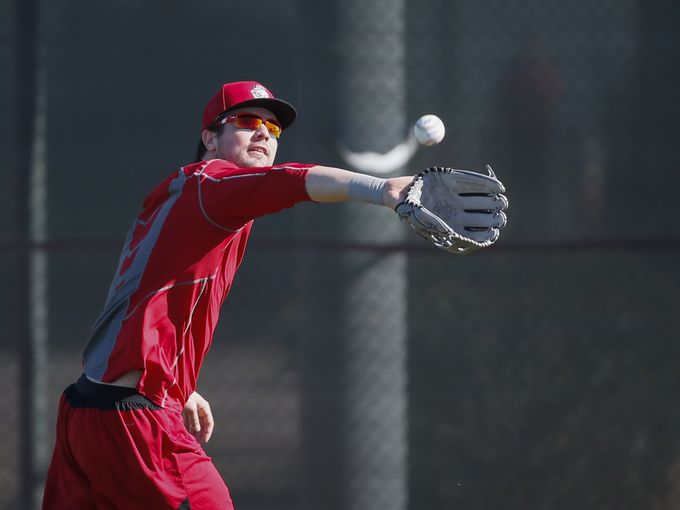 The Reds have three options with each player.Ã‚Â All this speculation, of course, assumes healthy, productive careers and no contract extensions or trades.

No 2016 call-up. This is the scenario with the most delay. Upside: It would assure the three players’ free agency was pushed back to 2024. 2023 would be age-29 and age-30 seasons for those three players. Johnny Cueto and Joey Votto produced $40 million-plus for the Reds in value those seasons. Downside: Zero big-league experience in 2016 means they would begin 2017 (eleven days into the season) as raw rookies.

Wait 11 days and call them up in late April 2016. The least-delay scenario. Upside: This choice would maximize big league experience. Downside: It would produce three Super Two players, raising the Reds payroll three, four and five years from now. Would forfeit control in the 2023 season.

Spread out the call-ups over the 2016 summer. This is the compromise option.Ã‚Â Upside: You don’t start the arbitration clocks until after the Super Two deadline has passed, which saves millions of dollars for each. Players get about a half season big league experience. Downside: Forfeits team control in 2023.