This St. Louis Cardinals 2016 preview was co-authored by Mike Maffie and Nick Kirby. 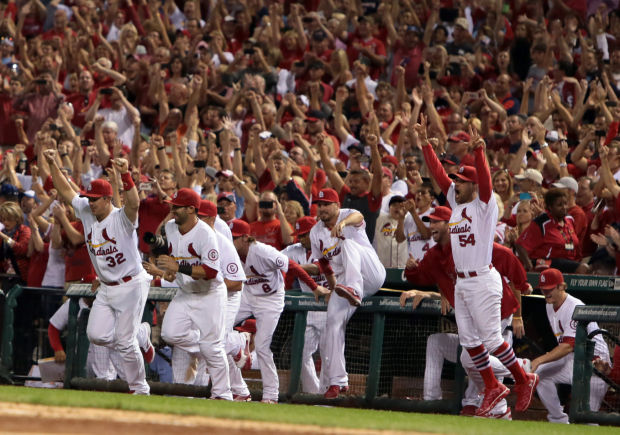 The Cardinals head into 2016 as the three-time defending champions in the NL Central.Ã‚Â They won 100 games in 2015, and they needed every win to win the division. The Pirates and Cubs won 98 and 97 games respectively, and those twoÃ‚Â teams met in the NL wild card game. The Cardinals would eventually lose to the Cubs in four games in the NLDS. The Cardinals won the first gameÃ‚Â of the series, but the Cubs offense took over the series from there. The Cubs hit 10 home runs in the series, and reached the NLCS for the first time since 2003.

The Cardinals battled injuries all season long, and it was a testamentÃ‚Â of their depth they were still able to win 100 games. The Cardinals went a good portion of the season without: Adam Wainwright, Matt Holliday, Matt Adams, Jon Jay, and Jamie Garcia. They also lost Carlos Martinez and Yadier Molina at the end of the year, plus had multiple other short-term injuries down the stretch.

The Cardinals overcame all those injury by having one of the greatest pitching staffs of all-time.Ã‚Â They allowed two or fewer runs 80 times, which is the most by any club since the 1972 Orioles. The Cardinals 2.92 team ERA was by far the best in baseball. Four of the Cardinals main five starters in 2015 (Martinez, Lynn, Lackey, Garcia) had an ERA below 3.06. The other starter was Michael Wacha, who finished the year with a 3.38 ERA, but that skyrocketed late in the year. His ERA was only 2.96 entering September.

The Cardinals mix and match lineup was just about league average, but it was enough with their great pitching. Their lineup was lead by off-season acquisition Jason Heyward (120 wRC+, 6.0 fWAR), Matt Carpenter (139 WRC+, 5.2 WAR), and rookie Randal Grichuk (138 wRC+, 3.1 fWAR). The Cardinals got big production down the stretch from rookies Stephen Piscotty (137 wRC+) and Thomas Pham (123 wRC+). 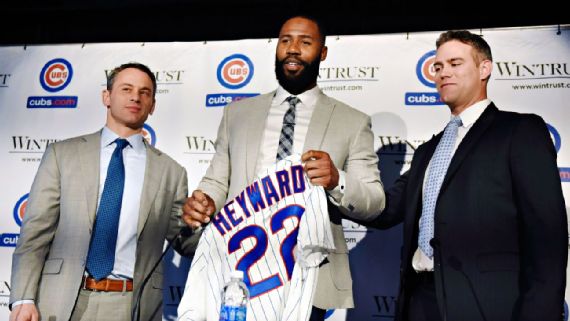 The biggest story of the off-season for the Cardinals as when Jason Heyward decided to sign with the Cubs. It might have signaled a new powerhouse in the NL Central. Losing a 6-win player to your biggest rival (who also appears to be building a great team for years to come) has to be tough. 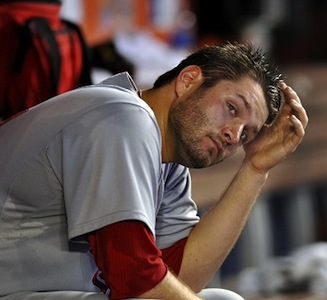 Baseball is a game filled with injuries. The 2015 Cardinals were no exception, losingÃ‚Â timeÃ‚Â from roughlyÃ‚Â fourteen different MLB-caliber players. None of these injuries were more painful than the loss of Adam Wainwright, who was able to only throw 28 innings for the Red Birds.Ã‚Â Four out of the previous five years Wainwright had finished in the top 3o in NL Cy Young voting, accumulating over 6 WAR in each of those four years.Ã‚Â Other keyÃ‚Â key players to spend time on the DL for the Cardinals were Jon Jay, Jhonny Peralta, Matt Adams, Matt Holliday, and Lance Lynn.

Needless to say, the Cardinals were looking forward to a relatively healthy 2016. It didn’t take long for those hopes to come back to Earth: on November 10th, Lance Lynn (2015: 175IP, 3.5bWAR) underwent Tommy John surgery and is expectedÃ‚Â to miss the entire 2016 season.

Spring training has also claimed its first major player from the Cardinals: a few weeks ago Jhonny Peralta (2015: 1.6bWAR) injured hisÃ‚Â leftÃ‚Â thumb ligament. He underwent surgery and is expected to return to the field in June. There is an interesting argumentÃ‚Â that last season demonstrated the Cardinals already have an effective in-house replacement for Peralta. The Cardinals, however, did not have faith in their existing options and, on March 19th, signed Ruben Tejada (’15: -0.1bWAR)Ã‚Â to a 1 year $1.5M contract.

Two other injuries of note:Ã‚Â Yadier Molina had offseason thumb surgery. He is not expected to fully return until Opening Day, but as of March 17th is hitting in spring training games. Ã‚Â Relief pitcherÃ‚Â Jordan Walden (’15: 10.1IP, 0.6bWAR) has right rotator cuff injury but returned to Spring Training on March 4.

Even before their injuries in spring training, ZiPS viewedÃ‚Â the Cardinals as more of a 80s win team than a 100-win team. ZiPS, for example, likes Adam Wainwright but sees him taking a step back (2016 projection: 3.6 WAR) compared to his previous seasons. Beyond this, ZiPS is fairly bearish on Matt Holliday. Last year, Holliday was on track for a 2.4bWAR season, while ZiPS sees him only as a 1.6 winÃ‚Â player this year (part of this is due to a projected decrease in playing time).

Here are the top projected position players for the Cardinals (table adapted from Fangraphs).

Projections should be taken with a grain of salt, however: last year ZiPS had the Royals at 79 wins. How’d they end up, again?

The Cardinals season starts off fairly favorable for them. They’ll have a tough opening series in Pittsburgh, but then they get the Braves, Brewers, and Reds after that.

May looks like the toughest month for the Cardinals. They begin the month by finishing a series vs the Nationals, and then have the Phillies, Pirates, Angels, Dodgers, Rockies, Diamondbacks, Cubs, and Nationals. That will be a true test for the Cardinals.

The Cardinals will finish up 2016 against NL Central foes. From August 29 through October 2, the Cardinals will play two series against every NL Central team (1 series at home, 1 series on the road). They have a 7-game west coast road trip smashed in the middle against the Giants and Rockies. 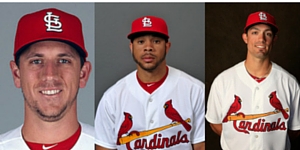 After dealing Jon Jay and losing Jason Heyward to the Cubs, the Cardinals are on a bit of a youth kick. A fewÃ‚Â new (and relatively young) outfielders, Stephen Piscotty, Tommy Pham, and Randal Grichuk are batting for starting spots. ThreeÃ‚Â players, two spots — it was a classic Spring Training battle. These players areÃ‚Â packing some serious punch, too:

Until it wasn’t. The Cardinals had experimented with Matt Holliday at first base last year but were not happy with the results. Yet due to Matt Adam’s the sudden drop off and anÃ‚Â unimpressive performance by Brandon Moss, it seems that Holliday may spend a largeÃ‚Â amount of time at first base. This sets upÃ‚Â Piscotty to move to right field, Grichuk to patrol center, and Pham in left.

Given these players flexibility to play multiple outfield positions, the Cardinals could experiment with different platoon setups throughout the season. WithÃ‚Â the declining power in major league baseball, this could be a competitive advantage for the Red Birds. 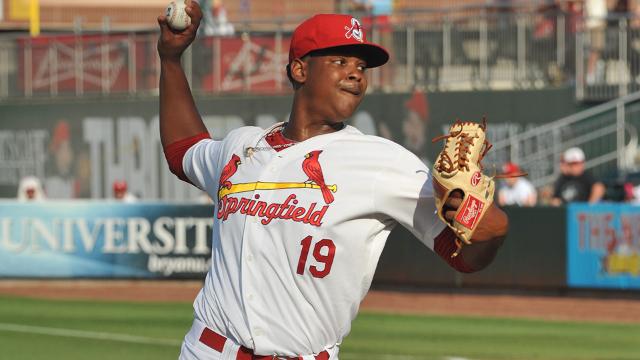 The Cardinals are always known for their incredible ability to bring up MLB ready talent whenever they need to. That being said, the Cardinals farm system right now might not be as good as you think. Baseball America ranked the Cardinals system #14 going into 2016. They were #15 last year, and #7 in 2014, and #1 in 2013.

The Cardinals only have two players ranked in the top 100 on MLB Pipeline. The first is RHP Alex Reyes, who comes in at #13. Reyes should be a frontline starter in the future for the Cardinals. He just reached AA at the end of last season, after posting a 2.26 ERA/1.72 FIP with 13.57 K/9 in 63.2 IP at A-ball. Ã‚Â He was however suspended 50-games during the offseason for testing positive for a second time for marijuana.

With the Cubs posing a threat to unseat the Cardinals atop the NL Central, Ken Rosenthal wrote that the Cardinals should sit out the free agent market and seek to improve at the trade deadline. With a mid-level farm system and some dollars to spend, itÃ‚Â seems the Cardinals may be able to take on an additional contract (or two) in June to prepare for a September run. The problem mayÃ‚Â be in keeping pace with the Cubs: the Cardinals have already suffered major losses to their club and we have yet to play a single meaningful game.

All of this has culminated into a sense of quiet concernÃ‚Â in St. Louis. The Cardinals offense has sputtered in spring training andÃ‚Â the front office is trying to improve its locker room culture. It is easy to overstate spring training moves because information is slow and everything gets into the papers. Yet it is not hard to see how this season could quickly turn against the Cardinals: Molina, Holliday, and Wainwright all are on the wrong side of 30 and returning from injuries. The Cardinals weakness in 2015, theÃ‚Â offense, will only get worse with the loss of Heyward. Fighting the month of May to a draw is the best any team could expect, but a disastrous early stretchÃ‚Â could leave the Cardinals in a race for second-place with the Pirates.

If everything goes right, the Cardinals will be in a position to deal from a mid-level farm system for a deadline deal and a push to win the division for a fourth straight year. Yet if things do not go right — if Wainright does not bounce back, if Matt Holliday declines more than expected (he is 36), if the Cardinals experience another major injury, or if the youth movement in the outfield is not as billed — the Cardinals couldÃ‚Â quickly find themselves falling behind the Cubs and/or Pirates.

Time and time again, writers have bet against the Cardinals only to see the team pull yet another rabbit out of their hat. Starting on April 3rd in Pittsburgh, we get to seeÃ‚Â how much magic isÃ‚Â St. Louis.