The Reds expect Homer Bailey to take the mound just under 12 months from the date of his Tommy John surgery. Dr. Tim Kremchek performed the procedure on May 8, 2015 and manager Bryan Price reiterated this week that Bailey is projected to make his first start around May 1.Ã‚Â The Texan threw two innings of live batting practice on Thursday.

“He looks to be ready right around May 1,” Price said before Bailey threw 16 pitches, took a breather and tossed another 14. “We’re going to get him stretched out. Our typical protocol in Spring Training is to get our starters six starts unless there’s a reason why we don’t, a setback in Spring Training or they get started a little bit later for some reason.

“But we want to get him a minimum of six starts and get him stretched out to 95 or 100 pitches. Get him up to the highest level of Minor League baseball where he’s pitching to better hitters there at the end.” (Barry Bloom, MLB.com) 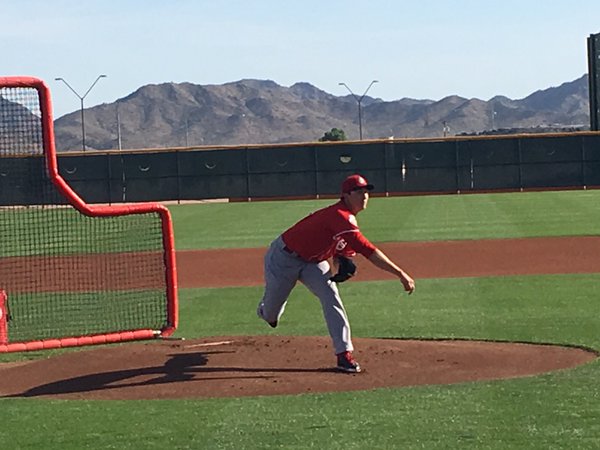 Reds hitters who had faced Bailey in his prior live batting practices reported good things.

(Scott) Schebler, who had never faced Bailey before, was certainly impressed with what he saw from his vantage point in the batterÃ¢â‚¬â„¢s box.

Ã¢â‚¬Å“Really good stuff, he threw some splitties that were absolutely disgusting, but overall, I was really impressed,Ã¢â‚¬Â Schebler said. Ã¢â‚¬Å“He looked pretty polished. His fastball had some great life to it and his splitty was really, really good. Some of them were cutting, some of them were dropping off the face of the Earth, it was really impressive. He was around the zone with it, too, which is even more impressive, because sometimes those pitches you can get erratic with it. He was around the zone with it the whole time. Ã¢â‚¬Â¦ It was impressive, thatÃ¢â‚¬â„¢s all I can say.Ã¢â‚¬Â

None of the four put a ball in play against Bailey, but did foul off a few pitches.

Orthopedic surgeons, physical therapists and trainers have varying rehab schedules, although timelines are converging around a common best practices schedule. Typically, pitchers begin long tossing 4-5 months after surgery and build up to throwing normal bullpen sessions off a mound 8-10 months after surgery.

For a while, the standard protocol for the time between UCL reconstruction and the return to start a major league game was 12-18 months. Now, many consider it closer to 9-12 months (Will Carroll).Ã‚Â Stephen Strasburg and Jordan Zimmerman returned 12 months after their TJS.Ã‚Â Younger pitchers are generally given more time than veterans. What to expect from those pitchers? Studies show theyÃ‚Â commonly return to their pre-injury level of performance after a period of adjustment. Some data suggests a slower aging curve for careers interrupted by Tommy John surgery.

Price repeated that the Reds feel Bailey could have been ready to pitch Opening Day.

Walking away from Field 2 after the session, Price confirmed that May 1 was indeed the projected date for Bailey to return to the Majors. He also said he was not concerned with the accelerated pace of Bailey’s comeback.

“He would have been ready for Opening Day, but we didn’t want to push him,” Price said.

If the Reds stick exactly to the May 1 return date for Bailey, he will take the mound against the Pirates in Pittsburgh on a Sunday afternoon. If the Reds wait until May 2, Bailey would pitch against the San Francisco Giants at Great American Ball Park.

The Pirates and Giants have one thing in common. They’ve both been victims of Homer Bailey no-hitters.