The Reds play a night game (9:40 p.m. ET) against the Arizona Diamondbacks. It will be nationally televised on the MLB network, streamed on MLB.tv and broadcast on WLW-700 radio. Use this post for the game thread.

It’s the first spring training start for Tim Adelman. It’s basically an emergency start.Ã‚Â Jonathan Moscot was supposed to start but he was scratched.Ã‚Â Moscot has an intercostal strain, but the Reds say he’s not yet in danger of missing a start. Yet. Mark Sheldon reports Moscot is only supposed to miss a couple days. The intercostals are a muscle group across your back. It’s painful to strain them, especially if you’re trying to play professional baseball. There are degrees of intercostal strains and it sounds like Moscot’s might be Grade 1. Here’s an article about them in the context of outfielder Dexter Fowler, who had the injury in 2014.

Peraza at short and leading off. Suarez batting second because that’s where he’s going to be on Opening Day. Duvall, Rodriguez and Holt get starts. They’re in the outfielder position battle. Jordan Pacheco getting a start at first base.

Cincinnati native William Howard Taft is the only other sitting president ever to attend a game in Cincinnati. In 1912, President Taft watched the Reds lose to the Philadelphia Phillies, but he didn’t throw out the first pitch. Taft had started the tradition of the sitting president participating in Opening Day ceremonies two years earlier at National Park in Washington D.C.

Ã¢â‚¬Â¢ Zach Buchanan (Cincinnati Enquirer) on Michael Lorenzen’s MRI and the impact of his injury on the starting rotation.

Losing Lorenzen, at least in the short term, further complicates a rotation picture that was murky to begin with. The righty was more likely than not to win a starting spot entering spring. He threw well in his lone Cactus League appearance, striking out two and allowing no runs over two innings against the San Francisco Giants.Ã‚Â The list of rotation candidates and available spots has dwindled slightly. Price said left-hander Brandon Finnegan is a good bet to secure a spot behind righties Anthony DeSclafani and Raisel Iglesias, and noted that lefty Jonathan Sanchez is now being considered for the bullpen only.Ã‚Â That still leaves right-handers Tim Melville and Jon Moscot and top prospects Cody Reed and Robert Stephenson battling for the final two spots. Each pair presents a conundrum. 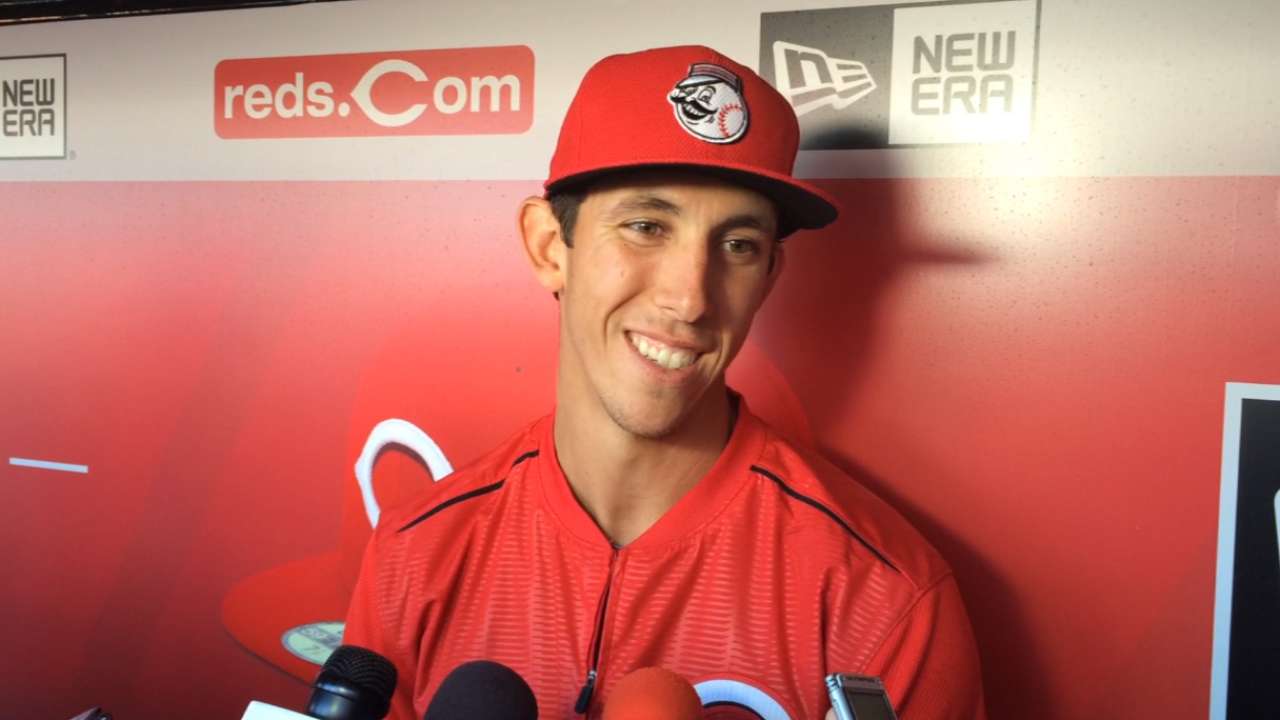 Ã¢â‚¬Â¢ Eno Sarris (FanGraphs) has a theory that Joey Votto tried to pull the ball more last May.

We were talking about something unrelated, so when Joey Votto slipped this quote in, I laughed out loud. You?! Joey Votto? You did what? Listening back to it even made me giggle again.

Ã¢â‚¬Å“I tried to do a lot of pull hitting early in the season and it was an error,Ã¢â‚¬Â he said, but my mind could barely comprehend in real time. Ã¢â‚¬Å“It was a mistake,Ã¢â‚¬Â he admitted before I could point out that it was completely out of character.

So why did he try it? Ã¢â‚¬Å“It was me trying to hit more homers. I thought IÃ¢â‚¬â„¢d get easy homers.Ã¢â‚¬Â After the laughter came a sort of stunned silence. The idea that Votto, who has preached going up the middle to himself and the gamesÃ¢â‚¬â„¢ biggest stars for as long as heÃ¢â‚¬â„¢s been great, tried to pull a few cheapies into the seats last year was a bit stunning.

Reminder: Mike Maffie had an elaborate breakdown of Votto’s lost (wallet) month of May.