First the good news. Raisel Iglesias is set to make his first start of the season. The Reds are playing on the road against the LA Angels at 4:10 p.m. ET. You can hear the broadcast on WSAI-1360 or watch it on MLB.tv streaming.

Here’s the rest of the lineup:

Iglesias on the mound. 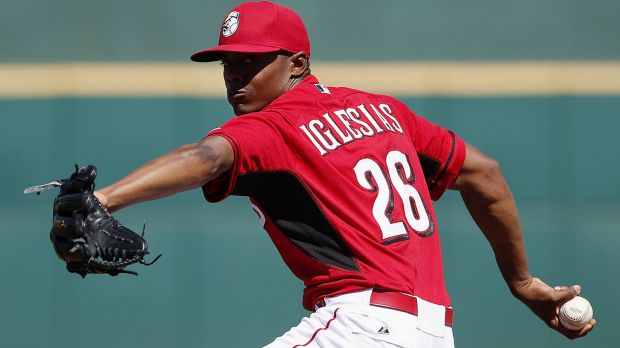 Get used to seeing Suarez bat second and Votto bat third. We’ll have to see where Devin Mesoraco enters the lineup, if and when he returns to the field toward the end of this week, as has been reported. Mesoraco might slide into the clean up slot, with Bruce fifth and BP sixth.

Reminder: Lineups only matter so much. But every inch counts. Patrick Jeter analyzed the Reds options.

Zack Cozart and Jake Cave hit back-to-back homers yesterday. Anthony DeSclafani, who you have to suspect will be the Opening Day starter, had a solid 4-inning appearance.

Ã¢â‚¬Â¢ Now the bad news. Pitcher Michael Lorenzen felt more discomfort in his right elbow after tossing yesterday and will have an MRI today with results announced tomorrow.

Lorenzen was scratched from a start last week after dealing with what was termed at the time as “elbow tenderness.” He had an ultrasound scan that came back clean.Ã‚Â Lorenzen resumed playing catch later in the week, but manager Bryan Price said the 24-year-old felt more soreness after playing catch Sunday. The team is expected to announce results on the scan on Tuesday. (Zach Buchanan, Cincinnati Enquirer)

This isn’t what anyone wanted to hear. Lorenzen came into spring training with a real shot at making the starting rotation. Nobody works out harder than Lorenzen. See the gun show below. If it turns out Lorenzen has hurt his elbow, it just proves how vulnerable the ligament is to the force imposed by the throwing motion. The tidal wave of UCL injuries throughout baseball has a number of causes. Various solutions have been proposed, some more modern and successful than others. Let’s hope Michael Lorenzen’s name isn’t added to the list. 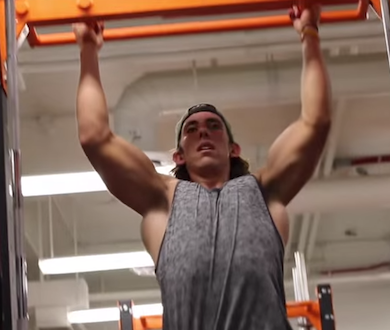 Ã¢â‚¬Â¢ Joey Votto calls out theÃ‚Â “loudmouths in the media” who suggested his decline based on a sub-par 2014 season, one derailed by injuries. He talks about his battle against aging in this interesting piece by Zach Buchanan.

The rumors of his demise –Ã‚Â propagated after he hit a pedestrian .255 while limited to just 62 games a year before –Ã‚Â were greatly exaggerated. When asked if being so written off bothered him, Votto paused to choose his words carefully.Ã‚Â Ã¢â‚¬Å“ThereÃ¢â‚¬â„¢s a lot of loudmouths in the media who think they know things, and they donÃ¢â‚¬â„¢t,Ã¢â‚¬Â Votto said. Ã¢â‚¬Å“TheyÃ¢â‚¬â„¢ve got a microphone or theyÃ¢â‚¬â„¢ve got a pen, and they can say something out loud or write it. Just because they say something doesnÃ¢â‚¬â„¢t mean itÃ¢â‚¬â„¢s true.

If you’re a frequent reader here, you shouldn’t have been misled by the ignorance of the amplified opinions on the airwaves. At age 32, it’s certainly reasonable to expect Joey Votto to start the gradual slide down his aging curve. On the other hand, last year might have been his most productive ever.

Reminder: We nailed it.

Ã¢â‚¬Â¢ Ken Rosenthal (Fox Sports) interviewed Reds president of baseball operations, Walt Jocketty about the rebuilding the club has done over the past year. Jocketty explains the reasoning for the type of moves the Reds made, including emphasizing near-ready major league players instead of those with a higher ceiling. Overall, the Reds executive remains optimistic.

Jocketty calls the Reds’ post-Chapman bullpen “our big question mark,” but he likes the depth of the rotation and believes the team is on the correct path.

I’ll have what he’s having.

Ã¢â‚¬Â¢ The Reds have been practicing situational hitting under the direction of hitting instructor Don Long, with Reds Hall of Famer Mario Soto on the mound.

Each hitter in the cage was given two tough pitches from Soto and a specific situation to execute with a runner on base.

It could be runner on third base, with the infield in. The hitter needs to get the ball up in the air. Or a runner on second base with no outs who needs to at least be advanced with a ball to the right side. And whatever is coming from the pitcher won’t likely be easy to hit.

“I want guys to learn how to be comfortable feeling uncomfortable,” Reds hitting coach Don Long said. “Because there will be many days throughout the year where you don’t feel locked in at the plate. The point is, in those moments, are you still competing? Are you finding a way to perform and execute in the situations we’re providing them? (Mark Sheldon, MLB.com)