Coming into the 2016 season, the Reds find themselves withÃ‚Â a bit of a logjam up the middle. Usually that word carries an optimistic connotation: “How are we going to get all of these great players time to showcase their talents?” Not this time. The Reds’ logjam consists more of burnt-out flotsamÃ‚Â and discarded plywood than any meaningful timber. Between Brandon Phillips, Zack Cozart, Eugenio Suarez, and Jose Peraza, the Reds have to find playing time forÃ‚Â two past their prime, one-trick ponies andÃ‚Â two untested, semi-promising, but likely disappointing prospects across three infield positions. Oh what exciting times these are.

Last week, Patrick Jeter took an in-depth look into what we can expect from Suarez, and on Monday, Nick Carrington dove into Dat Dude’s lasting legacy. Today, I’m looking at the Reds other oft-injured elder statesman to see if by some miracle, the situation isn’t as dire as it seems.

After an abysmal 2014 campaign, Zack Cozart came burning out of the gate in 2015, prompting FanGraphs to write a piece titled “The Best 40 Games of Zack Cozart.” Granted the article did spend its entirety convincing us that Cozart’s streak was aÃ‚Â fluke, but we never got to test that theoryÃ‚Â because three weeks later it was all moot. Cozart’s 2015 campaign ended on June 11 after he lunged for first base running out a grounder and shredded his knee in the process.Ã‚Â

With the uncertainty of an elite defender having his mobility potentially hindered, Cozart’s 2016 projections are not awe-inspiring. Both ZiPS and Steamer expect the shortstop to revert to pre-2015 levels of offensive production, but for some reason don’t anticipate him falling any further than that.

The projections place Cozart just a tick below his 2013 season, downgrading his defense (13.1 Def to 10.0/9.7) in compensation for the knee surgery. Neither portend Cozart having a full 600 plate appearances coming off of injury, but Steamer’s extended projection doesn’t expect much more production even if he does. Curiously enough, both systems see Cozart’s enhanced plate discipline from last season as anomaly, bringing both his walk rateÃ‚Â down and increasing his strikeout rate.

On the first point, it’s only natural that Cozart will lose a step in the field after coming off of major knee surgery. What’s worrisome is how far it will decline.Ã‚Â His quickÃ‚Â twitch and lateral movement just won’t be where it once was, which for a player who makes his money with his glove is a troublesome turn of events. For at least the rest of Spring Training, Cozart will be wearing a brace, whichÃ‚Â must be a hinderance despite his claims to the contrary. Also, starting the season suddenly without a bulky piece of equipment will probably take a game or two adjustment and could set the tone for the rest of the year.

While the Reds aren’t dependent on Cozart being productive this season, his ability to play the field could determine his job status come July. As a veteran on a rebuilding team, Cozart is dead weight blocking up the flow of progress. If he can manage to serve some function through the first half, I wouldn’t be surprised to see the Reds trying to shopÃ‚Â him to a team looking for a solid utility man.

As for the plate discipline, we’ve found the reasonÃ‚Â why Cozart will be a Red through the entirety of the 2016 season. The projections’ predicted regression is logical given Cozart hasn’tÃ‚Â swung a bat in the seven months prior to Spring Training. Yet, there’s still hope that Cozart can maintain the progress he made last year by tweaking his swing. According to Baseball Tonight’s Bill Ripken, Cozart’s 2015 awakening was due in part to his mechanical change of keeping his front shoulder tucked longer. The change allowed Cozart to make strongerÃ‚Â contact, as evidenced by the 2.5% jump inÃ‚Â his hard hit ball percentage.

Without half a year of practice or consistent maintenance, there is no guarantee that Cozart will be able to replicate the change, giving more credibility to the projections. However, toÃ‚Â play devil’s advocate, none of Cozart’s O-Swing% (pitches outside zone), Z-Swing% (pitches inside zone), or SwStr% (swinging at strikes) had statistically significant differences between his abysmal 2014 and resurgent 2015. In fact, the way the numbers trendedÃ‚Â should’ve indicated an even worse plate approach in 2015. Such is the magic of small sample sizes. I would be inclined to believe that Cozart’s plate discipline will stay truer to 2015’s numbers rather than the previous seasons, but that’s just conjecture. 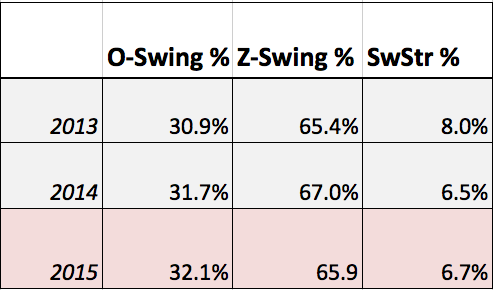 The most pressing question lingering around Cozart coming into 2016, however, has nothing to do with his health at all. Before the injury, Bryan Price moved Cozart all around the batting order, having him hit in every slot sans third and fourth. Cozart spend the most time in the second and eighth slots, with 12 and 11 appearances respectively. More tellingly, all 11 of Cozart’s eight hole starts came in the first two weeks of the season before he had proven his rejuvenated streak. After those opening weeks, Cozart only hit below seventh twice, and more predominantly hit second or leadoff for the team.

Entering 2016, Cozart’s designated “role” in the batting order is up in the air. RotoChamp projects the order as follows: 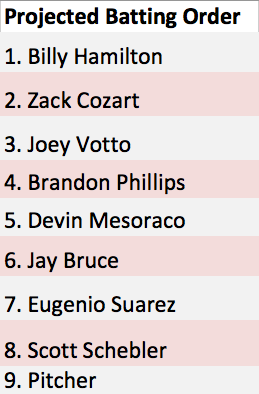 Bryan Price has already told fans and reporters not to “read anything into the lineup here inÃ‚Â camp” because both Cozart and Devin Mesoraco are absentee. Realistically, RotoChamp’s projection makes the most sense considering Price’s managing style, but by no means is it optimalÃ‚Â for the club. WithÃ‚Â the questions around his plate discipline, Cozart should absolutely hit in the bottom half. In terms of best fit lineup, the Reds have two options dependent on how flexible Price will be with Hamilton. 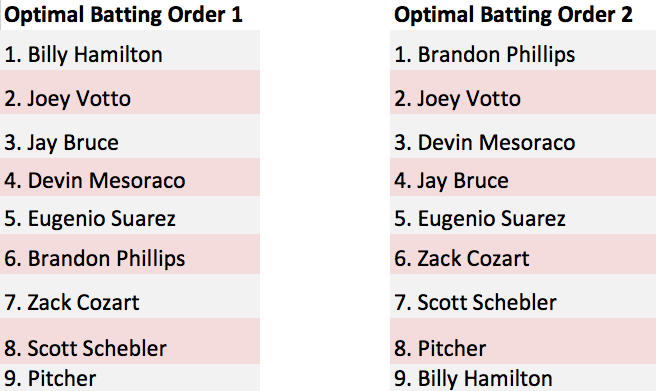 Ultimately, any way you play these eight, there’s a lineup full of free swinging, high strikeout hitters plusÃ‚Â Joey Votto. If Cozart can indeed return to 2015 form and not regress as far as the projections anticipate, then hitting second is probably in the club’s best interests. But that’s a big if given the circumstances.

Cozart is slated to get his first taste of spring action tomorrow during one of the split squad games against the A’s or Cubs. The team has been in no rush to get him on the field, so it’s unlikely he’ll have more than two at-bats or a couple innings in the field. The thing to watch is his mechanics at the plate and if they resemble old Zack or new Zack. If the shoulder starts pulling out again, expect to see Peraza and possibly Alex Blandino getting significant playing time much earlier in the season.

Unlike in Patrick’s analysis of Suarez, there’s no overwhelming positive outlook for sweet Zack Cozart. There’s just passable results, mediocre results and disappointing ones. The shortstop is a known quantity on the wrong side of 30 coming off of knee surgery. He has a job simply because there are no other options now that Suarez needs to be at third. Despite what I said previously, Cozart will not be traded for anything more than a bag of balls because the risk far, far outweighs the reward. What we can look forward to is one more year of highlight reel double plays before both he and DatDude ride off into the sunset.