Here is the lineup:

Tim Melville will start for the Reds. 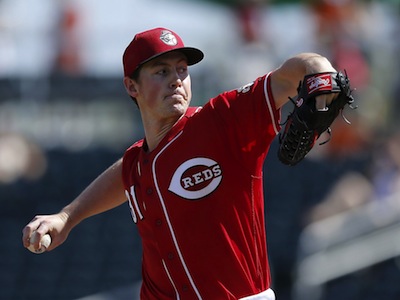 Michael Lorenzen was scheduled to start but was scratched. Lorenzen says he’s healthy (Rosecrans). Beat writers will ask Price about the swtich when they meet with him at 12:15 p.m. ET. (See update below, cover eyes first.) 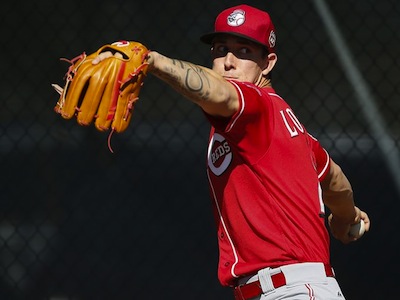 Update on Lorenzen: I’m going to pass this along without comment. Because of the site guidelines concerning language.

Lorenzen has Ã¢â‚¬Å“elbow tendernessÃ¢â‚¬Â and getting a couple of days off, Price said. Was checked out yesterday by Dr. Kremchek

On the bright side, Mark Sheldon reports that the ultrasound on Lorenzen’s elbow showed no serious injury.

Say ‘hello’ to Eric Jagielo who makes his first start for the Reds. Jagielo (23) is a power-hitting third baseman who played college ball at Notre Dame. The Reds acquired him from the Yankees in the Aroldis Chapman trade. Questions abound regarding his defense. Justin Merry’s composite ranking of Reds prospects has Jagielo #17. Here is Grant Freking’s scouting report on Jagielo.

Video: What Reds Fans Can Look Forward To?

Following one more session vs. hitters in camp for Iglesias, Reds manager Bryan Price expected him to make his Cactus League debut Monday vs. the Angels in Tempe. He is expected to make five spring starts and be on schedule for the regular season, likely to pitch from the fifth spot on or around April 10.

“It’s not really a concern from a health perspective,” Price said. “It’s just getting him strong enough to handle the workload and gaining more flexibility, which was an offseason goal, one of the reasons we didn’t start him throwing earlier. I think he’s ready. Realistically he could go into a game right now, but we’re not going to do that.”

Ã¢â‚¬Â¢ Zach Buchanan (Cincinnati Enquirer) has a long post about Eugenio Suarez. It reports on Suarez’s goals for 2016, building on his 2015 season, taking over at 3B for Todd Frazier and getting advice from you-know-who on hitting to the opposite field.

HeÃ¢â‚¬â„¢s just as confident about his ability to play third, and just as focused on maximizing his abilities there. He does a lot of reaction drills with infield coach Freddie Benavides before workouts in the mornings, and also takes grounders from Benavides during batting practice.

Even after Benavides stops slapping baseballs at him, Suarez remains in ready position in order to watch the ball coming off the bat of whoever is in the cage. He has yet to take any grounders at short, the position heÃ¢â‚¬â„¢s played his entire life.

Ã¢â‚¬Â¢ Mark Sheldon also has the latest on Zack Cozart. The Reds shortstop is on schedule to start his first game in the next few days (Friday).

“It’s been so long. It will be nine months exactly in two days since I got hurt,” Cozart said Tuesday. “I’m looking forward to it. I’m just really excited. I’m interested to see how I’ll feel out there. Each day I come in and get my ground balls and I see the ball live off the bat during batting practice, it gets easier and easier. Everything is slowing down for me. The first day I was out there seeing it, it was ‘Dang, these balls are being hit really hard. I don’t know about this.’Ã‚Â But every day is getting easier and easier. I feel good. I’m a normal guy.” 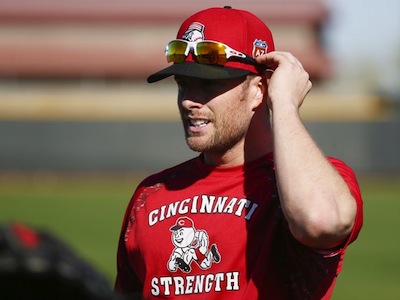 Ã¢â‚¬Â¢ Gary Schatz reports on Jumbo Diaz and that the Reds want him to use his splitter and slider more.

Reds bullpen coach Mack Jenkins has been analyzing the pitchers with video charting their pitches. For example, does a pitcher get hit harder when he throws inside to left-handed batters or outside? This has led the Reds to have Diaz work on his other pitches.

Ã¢â‚¬Å“Jumbo has three really good pitches but he has to access those pitches,Ã¢â‚¬Â Price said. Ã¢â‚¬Å“Everyone knows heÃ¢â‚¬â„¢s going to attack at 95-100 miles per hour but to then have to contend with that split as a right-hander hitter or the slider is really tough.Ã¢â‚¬Â

Reminder: Addison Kimmel on Diaz being too big to fail.