Fresh off their victory over the stupid Cubs in Mesa, the Reds return to Goodyear to take on the Colorado Rockies. The game starts at 3:05 p.m. ET and will be broadcast on radio only, on WLW-700.

Here’s the starting lineup that will face …

Jon Moscot will start on the mound for the Reds.

Jake Cave returns to the leadoff spot for the second day in a row. He’s clearly getting a long, hard look in that role. Several of the others in the competition for outfield roster spots — Adam Duvall, Yorman Rodriguez and Tyler Holt — get starts.

Ivan De Jesus is demonstrating his versatility, starting at 2B. In just the first week, he’s played third, short and second. If Adam Duvall can cover first base, that creates the possibility that the Reds could go with six outfielders (including Duvall) coming out of spring training. 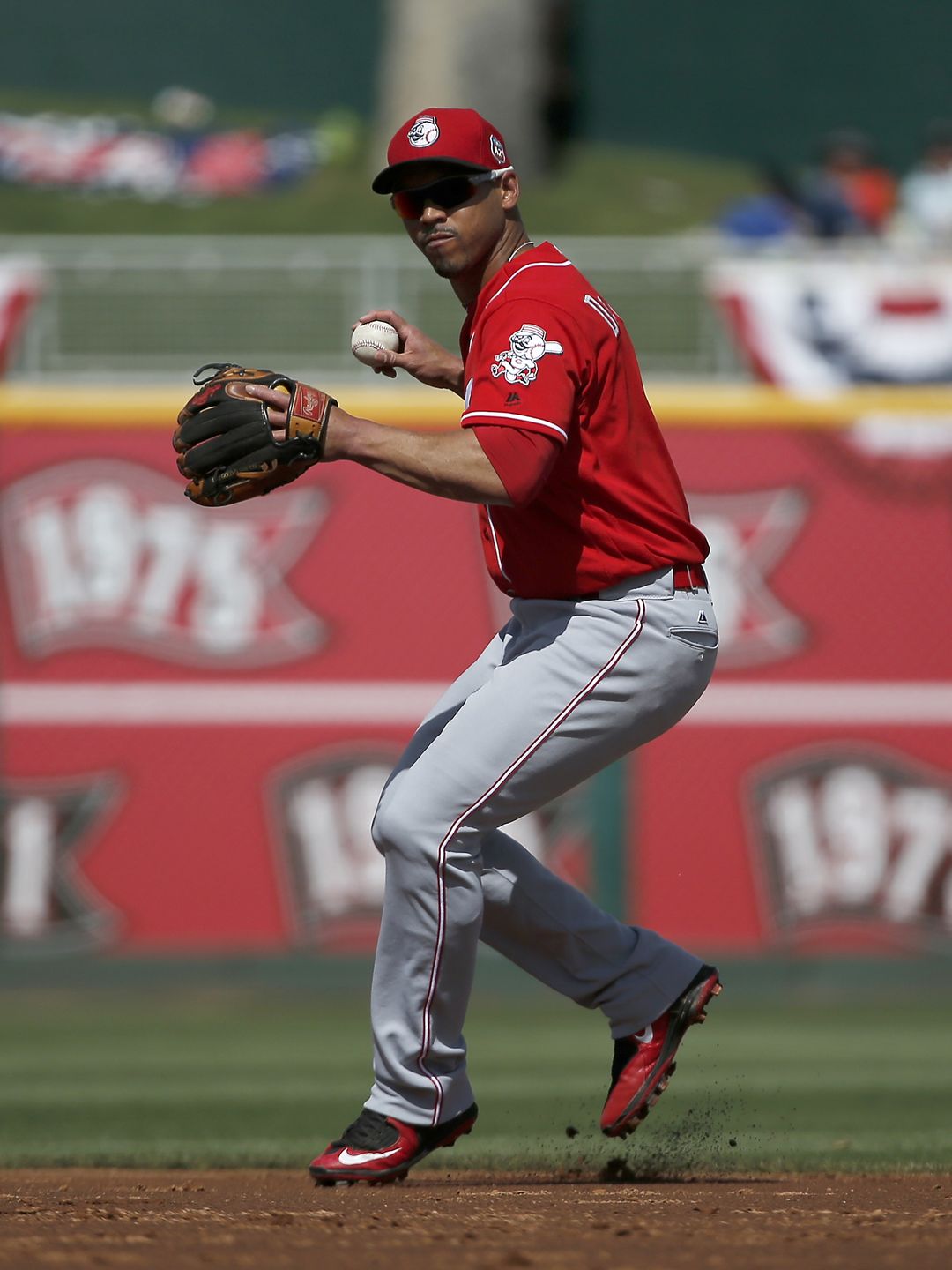 Not so fast about first base, says Brandon Allen, who is starting today. Allen is a 30-year-old left handed bat. He’s been in the Mets minor league system the past two years. He hasn’t played in a major league game since 2012 with the Tampa Bay Rays.Ã‚Â Last season with the MetsÃ¢â‚¬â„¢ Triple-A affiliate in Las Vegas, Allen hit .273/.350/.478 with 16 home runs. The Reds signed Allen to a minor league contract on December 1.

Ã¢â‚¬Â¢ Gary Schatz (Dayton Daily News) has new information on the Reds plans for Raisel Iglesias, who has been on a cautious track so far this spring:

Iglesias, who started later in spring due to the shoulder fatigue he experienced last September, will face hitters in live batting practice and pitch in games in the middle of the month.Ã‚Â Ã¢â‚¬Å“He will have five starts to get ready for the season,Ã¢â‚¬Â Price said. Ã¢â‚¬Å“He wouldnÃ¢â‚¬â„¢t have to make his first start of the season until April 10.Ã¢â‚¬Â

April 10 is the sixth game of the season, Sunday at home against the Pirates.

Reminder: Our scouting report on Iglesias the day he signed with the Reds. Ã‚Â Wes Jenkins suggested Iglesias as a bandwagon candidate.

Donald Lutz hadnÃ¢â‚¬â„¢t thrown a ball in a competitive game since undergoing Tommy John surgery last April, so of course the ball found him early in SaturdayÃ¢â‚¬â„¢s Ã¢â‚¬Å“BÃ¢â‚¬Â Game against the White Sox.Ã‚Â Lutz, 27, started the Ã¢â‚¬Å“BÃ¢â‚¬Â game at the RedsÃ¢â‚¬â„¢ Spring Training Complex in Goodyear in left field.Ã‚Â ChicagoÃ¢â‚¬â„¢s first hitter of the game hit a triple to left-center, and Lutz got to the ball first and had to throw it in.Ã‚Â Ã¢â‚¬Å“I was really excited,Ã¢â‚¬Â Lutz said with a smile after the RedsÃ¢â‚¬â„¢ 4-3 victory in five innings in that game.

Ã¢â‚¬Â¢ Nick Cafardo (Boston Globe) offers the latest bump to the rumors connecting the Reds and Orioles in a trade regarding Jay Bruce:

ThereÃ¢â‚¬â„¢s still a possibility Bruce winds up in Baltimore as the Orioles try to plug last-minute holes. They are considering Austin Jackson, but Bruce because of his power might be a much better fit. The Orioles donÃ¢â‚¬â„¢t believe Mark Trumbo can play right field every day and really needs to be a full-time DH, so it behooves the Orioles to get a good all-around player to play right.

Reminder: The case for not trading Jay Bruce right now. 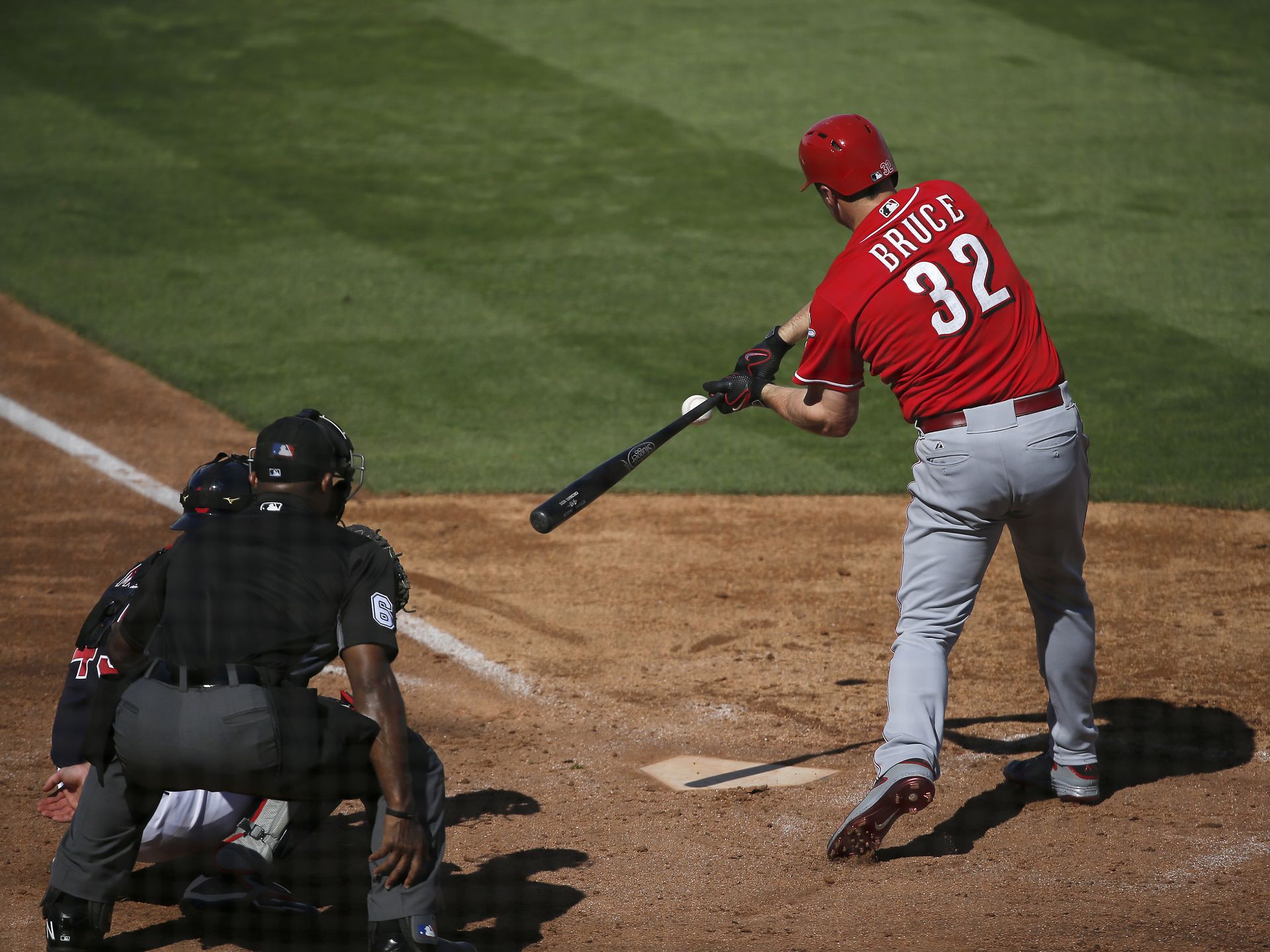 Ã¢â‚¬Â¢ Bruce Levine (CBS Chicago) suggests Bruce might be a good fit for the White Sox, and talks to former Bruce teammates Todd Frazier and Dioner Navarro about it:

Former teammates Navarro and Frazier like what BruceÃ‚Â brings to the field.Ã‚Â Ã¢â‚¬Å“Great teammate and great guy,Ã¢â‚¬Â Navarro said of Bruce. Ã¢â‚¬Å“He is one of those guys that is going to go out there everyday and give you his best.If we get him he would be a huge plus for us.Ã¢â‚¬ÂÃ‚Â Added Frazier, a teammate of four years: Ã¢â‚¬Å“He was a great teammate for me.”

If the Reds move Bruce for pennies on the dollar instead of waiting for the trade deadline, it’s going to be discouraging.

Ã¢â‚¬Â¢ Mark Sheldon (MLB.com) has a post on Joey Votto and Jay Bruce working on bunting in strategic situations. Votto bunted unsuccessfully against the Cubs yesterday:

“He [Votto] and Jay [Bruce] have spent a lot of time working on their bunting,” Reds manager Bryan Price said after the game. “They’re trying to take advantage when the situation dictates, leading off an inning down by a couple of runs or something to get something started, taking advantage of the shift and try to get on base.”

Ã¢â‚¬Å“If the atmosphere is like this, this is where I want to play for the rest of my life,Ã¢â‚¬Â Frazier told the Sun-Times Saturday morning. Ã¢â‚¬Å“ItÃ¢â‚¬â„¢s awesome, itÃ¢â‚¬â„¢s a great time. The guys have been nothing but great to me and IÃ¢â‚¬â„¢m here to help as much as I can. When they welcome you as theyÃ¢â‚¬â„¢ve welcomed me I want to return the favor.Ã¢â‚¬Â