While mired in this rebuild reboot of unknown length, I like trying to identify the places where the Reds need improvement, and the places where the Reds can likely say “we’re good.”Ã‚Â  In my estimation, only first base and one or two starting pitchers are guarantees to be around for the next competitive Reds squad; every other position is in flux and could remain so for the near future.

It dawned on me while perusing some 2015 statistics, however, that the Reds might have another talent that locks up a position with no need for upgrade; that talent being Eugenio Suarez.Ã‚Â  Suarez already has a track record of doing extraordinary things.Ã‚Â  Before we talk about these extraordinary things, letÃ¢â‚¬â„¢s look at the 2016 projections for Suarez from some of the popular projection systems, as well as his 2015 stats for reference:

Anything with a Ã¢â‚¬Å“600Ã¢â‚¬Â appended to it denotes the numbers are prorated to 600 plate appearances.Ã‚Â  Both Depth Charts and Steamer are projecting Suarez for much less than a full-season because he didnÃ¢â‚¬â„¢t play a full season in either 2014 or 2015.Ã‚Â  IÃ¢â‚¬â„¢m calling that a sim-ism.Ã‚Â  Those projection algorithms clearly do not know Suarez will be the full-time third baseman for the Reds in 2016.Ã‚Â  Barring injury, which he doesnÃ¢â‚¬â„¢t have a history of, Suarez will be playing a full season.

So what should we take away from these projections?Ã‚Â  All three projections have Suarez continuing to show most of the home run power he showed last year.Ã‚Â  He was on an almost 20 HR pace in 2015, and projecting him for 17 or 18 seems very reasonable, if a bit conservative.Ã‚Â  All three systems also think Suarez will walk a bit more and two of three think he will strike out a bit less.Ã‚Â  I would say this is a fair guess given the fact that he now has more experience and coaching under his belt.

Let us quickly discuss defense. Suarez was bad last year at shortstop. All three of Defensive Runs Saved (DRS), Ultimate Zone Rating (UZR/150), and FanGraphs Def rated Suarez as the worst regular shortstop in the majors last year.Ã‚Â  Many of his shortcomings, at least to my eyes, seemed mental in nature.Ã‚Â  Perhaps he didnÃ¢â‚¬â„¢t look the ball into his glove, or didnÃ¢â‚¬â„¢t set his feet before throwing.Ã‚Â  That kind of stuff can be fixed with repetition and coaching.Ã‚Â  Physically, there is nothing stopping him from being an average-or-better infielder and I expect just that this year from Suarez at the hot corner.

Moving back to the projections above, the idea of Suarez being better at third base in 2016 than he was at shortstop in 2015 shows up in the WAR column. Even though the projections expect his hitting to decline, his WAR figures are higher. Without an explicit defense vs base running breakdown, I think it is a safe assumption that defense is where most of these gains will be made.Ã‚Â  Playing average defense at third base while being close to a league-average hitter will put you in the 2.0 WAR range, which is average.

The most notable takeaway from the projections, I think, is the regression of his batting average on balls in play (BABIP) to be much closer to league average. This is a common and well-founded adjustment to make when projecting young hitters.Ã‚Â  From 2010 to 2015, league-wide BABIP has been no lower than .295 and no higher than .299.Ã‚Â  For a large majority of players, BABIP should fall very close to that range.Ã‚Â  Some players (see Votto, Joseph), over a statistically-relevant sample size, have proven to be able to maintain a much higher BABIP than league-average. Ã‚Â In small sample sizes, we call it luck; in large sample sizes, we call it skill.Ã‚Â  So, does Suarez have this skill?

In 2015, Suarez maintained a BABIP of .341 in almost 400 PA.Ã‚Â  The mathematical method of split-half reliability tells us BABIP will be mostly reliable (essentially, signal-to-noise ratio of 1) when the sample reaches nearly 900 balls in play.Ã‚Â  That amount of balls in play, of course, takes multiple seasons.Ã‚Â  Until that point, itÃ¢â‚¬â„¢s usually good to be skeptical about high BABIPs.

Some other skills can serves as a sort of leading indicator for sustained higher BABIPs, though. The things that influence high BABIPs are hitting the ball hard, hitting line drives, avoiding too many fly balls, having speed, hitting the ball the other way, and not popping up.Ã‚Â  If you can master those skills, you will likely be a high BABIP player.

Suarez, while unlikely to maintain a .341 BABIP, should be one of those players that can outperform league average on a regular basis.Ã‚Â  Why?Ã‚Â  He hits the ball hard.Ã‚Â  More specifically, he doesnÃ¢â‚¬â„¢t hit the ball softly.Ã‚Â  Those may seem synonymous, but I assure you they are merely analogous, at best.Ã‚Â  Below is a chart showing the top 10 hard-hit percentages (Hard%) for all MLB shortstops in 2015 with a minimum of 350 PA: 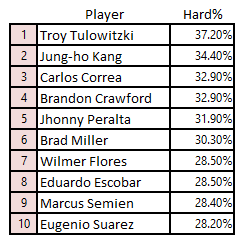 There is nothing shameful about being behind Tulowitzki, Kang, Correa, Crawford, or Peralta.Ã‚Â  They are all very accomplished hitting shortstops.Ã‚Â  Being behind Miller, Flores, Escobar, and Semien, however, is not something to strive for.Ã‚Â  Ã¢â‚¬Å“Wait a minute,Ã¢â‚¬Â you might be saying.Ã‚Â  Ã¢â‚¬Å“I thought you said Suarez hits the ball hard!Ã¢â‚¬ÂÃ‚Â  Sort of.Ã‚Â  I more accurately said Ã¢â‚¬Å“he doesnÃ¢â‚¬â„¢t hit the ball softly.Ã¢â‚¬ÂÃ‚Â  Behold: 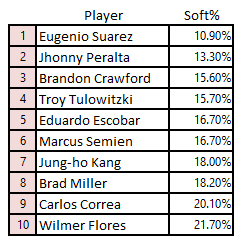 Suarez avoids soft contact. Over 89% of his 2015 balls-in-play were classified as Ã¢â‚¬Å“hardÃ¢â‚¬â„¢ or Ã¢â‚¬Å“medium.Ã¢â‚¬ÂÃ‚Â  That is good. The next closest player hit the ball softly 22% more often than Suarez.Ã‚Â  Common knowledge may want you to believe hitting the ball hard is more important than not hitting the ball softly.Ã‚Â  I disagree.Ã‚Â  Pulling every player with 350+ PA from 2015 and running a simple single-variable regression, Soft%-to-BABIP had a stronger relationship than did Hard%-to-BABIP.Ã‚Â  WeÃ¢â‚¬â„¢re talking very low adjusted R-squared values here, given the random nature of balls in play, but the relationship exists.Ã‚Â  Before we move on, it is important to note that SuarezÃ¢â‚¬â„¢s 10.9% Soft% was also 8th best in all of MLB for players of any position.Ã‚Â  In 2015, Suarez avoided soft contact almost as well as any other player in the league. Check out this company: 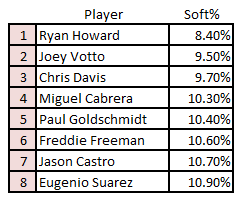 His name almost seems out of place, doesnÃ¢â‚¬â„¢t it? Maybe not.

How does Suarez fare in regards to the other Ã¢â‚¬Å“high BABIP skills?Ã¢â‚¬ÂÃ‚Â  In 2015, Suarez was above average in hitting the ball the other way, avoiding pop-ups, and hitting the ball hard.Ã‚Â  He was actually slightly below average in his line drive rate and fly ball rate. Line drive rates take almost as long to stabilize as BABIP itself, so we canÃ¢â‚¬â„¢t really glean anything from SuarezÃ¢â‚¬â„¢s numbers in this category.Ã‚Â  Regarding fly balls; higher fly ball rates are good for increased home runs, but not for sustained elevated BABIPs.

I said all that to say this: based on what I see in the stats and in his swing, Suarez is likely a player that can maintain an above-average BABIP.Ã‚Â  Thus, I feel his 2015 computer-based projections are a bit too conservative.Ã‚Â  I feel his BABIP will come down a bit, but that will be offset by an increase in walk rate and a similar HR/FB%, which the projections above are regressing a bit.Ã‚Â  Most likely outcome, in my view, is something very similar to last year; around 5% better than league average (105 wRC+).

What about pie-in-the-sky dreaminess, though? Most-likely projections arenÃ¢â‚¬â„¢t all that fun.Ã‚Â  Earlier I mentioned Suarez has already done something extraordinary.Ã‚Â  Try this on for size: since 1901, here is the list of shortstops that hit at least 12 HR, batted .275+, and slugged .440+ in their first or second season in the bigs:

The other names on the list, however, are like a Who’s Who of great hitting shortstops from the last 18 seasons.Ã‚Â  You may have noticed that Correa, Kang, Lindor, and Suarez all accomplished this feat in 2015.Ã‚Â  That might be strange enough to warrant its own article.Ã‚Â  In 114 years of available data, this feat has been accomplished 9 times and 4 of them occurred in 1 season.

So, how did these players fair in their next few seasons?Ã‚Â  With the exception of Tulowitzki getting hurt the following season, the answer is Ã¢â‚¬Å“very well.Ã¢â‚¬ÂÃ‚Â Ã‚Â  Here are the averages of those players in the next 3 seasons (Correa, Kang, Lindor obviously excluded):

Every player on the list maintained well above-average BABIPs across their next three seasons except Tom Tresh, who was merely league-average.

If IÃ¢â‚¬â„¢m going to be fair, Tulowitzki, Ramirez, and Garciaparra has some amazing seasons clumped in here.Ã‚Â  Perhaps it is foolish to think Suarez is capable of matching these players. Although, even being on a list with Garciaparra, Tulowitzki, Ramirez, budding superstars Correa and Lindor, and the former best hitter in Korea, is an honor itself.Ã‚Â  Perhaps the best note of all is that none of these players regressed during any of their three subsequent seasons (Tulowitzki injury notwithstanding).

And who knows?Ã‚Â  Maybe the Reds struck gold in the Alfredo Simon trade! Maybe Suarez is the next great hitting infielder!Ã‚Â Even if he isnÃ¢â‚¬â„¢t, I think the answer to the question Ã¢â‚¬Å“Will his bat play at third?Ã¢â‚¬Â should be answered definitively and vociferously; Ã¢â‚¬Å“Yes!Ã¢â‚¬Â

[Spring Training Update: Through the first two games, Suarez seems very quick to the ball, showing good perceived exit velocity on his way to 3 doubles in the first 2 games. While watching a replay of his 3rd double, his swing reminded me greatly of a young Manny Ramirez through the load and release. The finish, however, is decidedly not very Manny-esque. Due to copyright issues, I canÃ¢â‚¬â„¢t put certain photos here, but go look at some stills of Manny vs Eugenio during the load and release part of their swings; very, very similar.]