The question Ã¢â‚¬Å“who is the greatest hitterÃ¢â‚¬Â is likely to garner many different answers depending on how the statement is qualified. If asked about the greatest current hitter, respondents are likely to name Mike Trout, Bryce Harper, or Miguel Cabrera, depending on their recency bias and statistical slant. If asked about the greatest hitter of all-time, many fan will apply their own qualification to the question.Ã‚Â  The common answers are Babe Ruth, Ted Williams, or Hank Aaron.Ã‚Â  If you are a look-the-other-way sort of fan, Barry Bonds may enter your mind.Ã‚Â  If you are a huge fan of old school players, perhaps Ty Cobb is the greatest hitter of all-time.

Today, we will attempt to qualify our statement as such: Who is the greatest Reds hitter of all-time?Ã‚Â  We will endeavor to answer this question in a few different ways and see where it gets us. Sometimes, I have an idea of what the results will show before I do the math. Ã‚Â For this article, I had no idea.

Before we begin, I need to make an important distinction.Ã‚Â  This analysis will mainly consider only the years each player wore a Cincinnati uniform.Ã‚Â  If we opened the filters to any player who put on a uniform for the Reds, the answer to the titular question would be Ã¢â‚¬Å“Frank RobinsonÃ¢â‚¬Â and this column would be at an end.Ã‚Â  However, since Robinson spent only 10 of his 21 seasons in Cincinnati, and since the RLN faithful need something to read on their Friday lunch break, we can now continue with the column!

Because some of the methods I employ are of a time-consuming nature, I did not look at every Reds player. I also did not include players from before the modern era, apologies to Edd Roush and Cy Seymour.Ã‚Â  I did, however, select a sampling of the greatest Reds hitters. Perhaps you disagree with this sampling, but at some point over the years it is likely that someone may have described each of these guys as being Ã¢â‚¬Å“one of the best.Ã¢â‚¬ÂÃ‚Â  A few of these players are included for other reasons; such as Adam Dunn, who represents the best Reds hitter of the forgettable late-Larkin, pre-Votto era; Eric Davis, who represents the ubiquitousÃ‚Â Ã¢â‚¬Å“high ceilingÃ¢â‚¬Â player who was derailed by his health; and Ken Griffey Jr, who at one point projected to be the greatest hitter of all-time before he came to Cincinnati.Ã‚Â  Luckily, mathematics lets us put everyone on equal footing.

Without additional delay, here are the players we will examine:

In order to get the obligatory counting stats and basic rate stats out of the way, here is an all-time Reds leaders chart to sate your desire for such things: 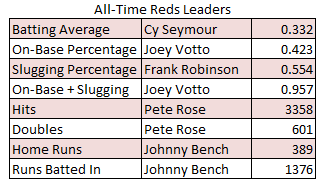 As most of us probably already knew, Pete Rose accumulated a lot of hits; most of them with the Cincinnati Reds; Johnny Bench was a fantastic power hitter who hadÃ‚Â other fantastic players playing aroundÃ‚Â him; and Joey Votto knows how to get on base.Ã‚Â  Trying to determine the greatest Reds hitter of all-time from data like this is a foolÃ¢â‚¬â„¢s errand.Ã‚Â  For one thing, each of these players played in different eras.Ã‚Â  Frank Robinson slugging .554 as a Red is significantly more impressive, for example, than Jim Thome slugging .554 for his career during the height of the steroids era. A few popular offensive stats are already adjusted for playing era, like wRC+ and OPS+, however simply listing those doesnÃ¢â‚¬â„¢t take into account playing time, and we want to take playing time into account, at least initially, to determine the greatest Reds hitter of all-time.

Those of you who read my first article with Redleg Nation titled Joey Votto, Deviant will likely see similarities in the following approach.Ã‚Â  In that article, I introduced the idea of using standard deviations above average (SDAA) as a proxy for how Ã¢â‚¬Å“dominantÃ¢â‚¬Â a player isÃ‚Â at a particular offensive baseball skill.Ã‚Â  Instead of examining career totals and comparing those totals to some arbitrary average, however, for this exercise I want to use a slightly different method.Ã‚Â  We will focus on OBP and SLG, exclusively.Ã‚Â  Why?Ã‚Â  Well, these two stats correlate most closely with overall offensive value and team runs per game, with SLG being slightly more important than OBP in the modern era.Ã‚Â  IÃ¢â‚¬â„¢ll save the gory math for a future post.

Step one should be to characterize the era in which each player on our list played.Ã‚Â  Endeavoring to do just that, I calculated the league average OBP and league average SLG for each player based on the years he was active in major league baseball.Ã‚Â  Results can be seen in the following chart: 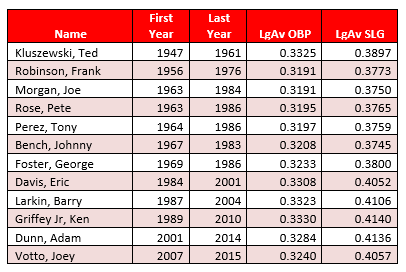 As you might expect, the eras populated by Larkin, Griffey, and Dunn have much higher league average SLG figures than all other eras thanks to gentlemen like Barry Bonds and Mark McGwire. Ã‚Â Notice also that the members of the Big Red Machine played in an era of relatively suppressed offense, making their contributions all the more impressive.

Now, building on the idea of using SDAA as a measure for player performance, I will suggest now that we do something most mathematicians would cringe at; letÃ¢â‚¬â„¢s find how many SDAA each player accumulated in the OBP and SLG statistics for each year they played for the Reds and simply add them up.Ã‚Â  Adding together the numerical representations of standard deviations from different samples isnÃ¢â‚¬â„¢t the most rigorous use of mathematics, but weÃ¢â‚¬â„¢re going to do it anyways because it tells a very interesting story.

HereÃ¢â‚¬â„¢s an example of one on myÃ‚Â player cards describing what I discussed above: 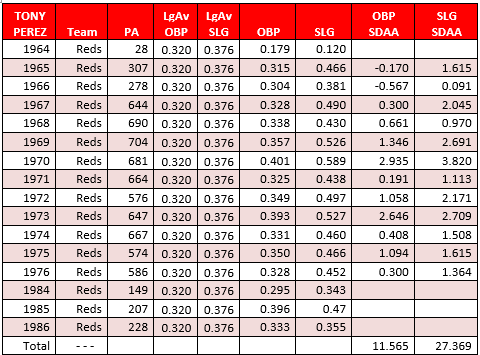 This shows each of the 16 seasons Perez played for the Reds, broken down by OBP and SLG, along with his era-adjusted LgAv OBP and LgAv SLG figures, as well as his Ã¢â‚¬Å“standard deviations above averageÃ¢â‚¬Â figures for each season.Ã‚Â  Once we calculate all that, we simply sum them up! YouÃ¢â‚¬â„¢ll see for his career, Perez accumulated 11.565 OBP SDAA and 27.369 SDAA.Ã‚Â Ã‚Â  A league average offensive player would have exactly 0 in both of these categories.Ã‚Â  So, the sum of all these seasons can be viewed as both a good measure of longevity and/or peak dominance.

Now is probably an important time to discuss why some of the above cells are blank.Ã‚Â  I decided to only count seasons for the additive SDAA totals that eclipsed the arbitrary 250 plate appearance threshold.Ã‚Â  For Perez, you see that each of his last 3 seasons during his Cincinnati reunion are below that threshold, and as such, his totals reflect only his time as a member of the Big Red Machine and earlier.

So, now that we have the method defined, letÃ¢â‚¬â„¢s look at our entire list of players along with their OBP SDAAs: 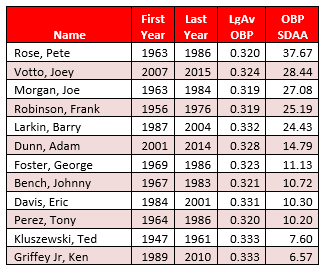 This list shouldnÃ¢â‚¬â„¢t come as much of a surprise.Ã‚Â  Pete Rose has the highest additive OBP SDAA of any Reds player for 2 reasons.Ã‚Â  First, he played a lot of games for the Reds, and second, he was quite good at getting on base.Ã‚Â  Another way to look at this could be something like Ã¢â‚¬Å“Pete Rose provided more overall value to the Cincinnati Reds franchise via getting on base than any other player in history.Ã¢â‚¬Â

Interesting to note on this chart is how much higher the oft-maligned Adam Dunn is compared to some of the Reds greats.Ã‚Â  Getting on base is certainly a skill, and Dunn certainly possessed that skill.

Now, letÃ¢â‚¬â„¢s look at our other statistic; slugging percentage, in terms of SDAA: 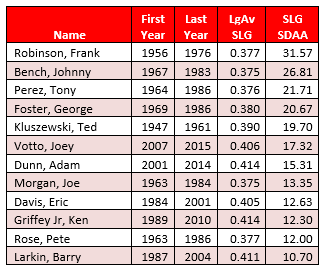 The names on this list should also not come as much of a surprise.Ã‚Â  Frank Robinson was an absolute beast in a Reds uniform, as was the Reds all-time leader in HR and RBI, Johnny Bench.Ã‚Â  As with the comparison of OBP and Pete Rose above, we can interpret this chart as something like Ã¢â‚¬Å“Frank Robinson provided more overall value to the Cincinnati Reds franchise via accumulating total bases than any other player in history.Ã¢â‚¬Â

As expected, letÃ¢â‚¬â„¢s combine the previous two charts and do some addition: 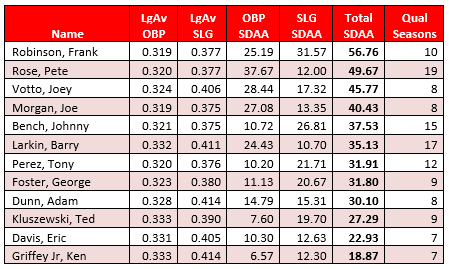 Combining our two measures, we see that none other than Mr. Frank Robinson has accumulated the most SDAA while wearing a Reds uniform, that is, he has produced more value for the Cincinnati Reds with his on-base and slugging skills than any other Red. Ã‚Â He is your undisputed Ã¢â‚¬Å“greatest hitter in Reds history.Ã¢â‚¬Â For a guy who is one of the greatest hitters in MLB history this may, again, not have beenÃ‚Â much of a surprise. Regardless, now we have an additional way to justify Robinson’s place in our mental pantheon.

As mentioned earlier, each playerÃ¢â‚¬â„¢s seasonal SDAA was only counted towards their total SDAA if that season was marked by the player accumulating a minimum of 250 PA. Also, since weÃ¢â‚¬â„¢re only talking about seasons while wearing a Reds uniform, letÃ¢â‚¬â„¢s convert to a per-season basis and see if we can find anything worth talking aboutÃ¢â‚¬Â¦ 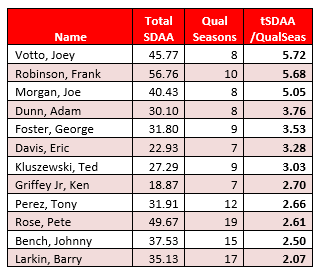 Welp. HeÃ¢â‚¬â„¢s done it again.Ã‚Â  Votto has broken my spreadsheet.Ã‚Â  Why does he keep doing that! If IÃ¢â‚¬â„¢m being honest, itÃ¢â‚¬â„¢s fairly inconsiderate of him.Ã‚Â  Always getting in the way of popular narratives and commonly held Ã¢â‚¬Å“truths.Ã¢â‚¬Â

SLG and OBP are the two most important base stats when trying to describe offensive output.Ã‚Â  Over the years the Reds have had many, many players who are great at doing these things.Ã‚Â  Turns out no one has done it to the magnitude ofÃ‚Â Frank Robinson, and no one has done it as efficiently as Joey Votto. 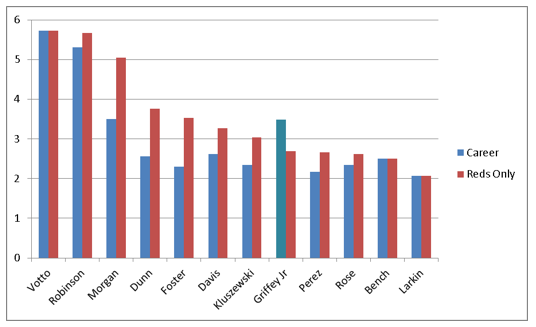 After our parting graph; a few parting thoughts:

Adam Dunn was a much, much better hitter than people realize. Of course, his deficiencies in other places canÃ¢â‚¬â„¢t be ignored, but he could certainlyÃ‚Â produce at the plate.

Eric Davis and George Foster, on a per-season basis, were better Reds hitters than Reds inner-circle greats like Perez, Bench, and Rose.

Since this is a hitting article, no mention has been made, until now, of defense and base running.Ã‚Â  In terms of overall value (WAR), however, Frank Robinson and Joe Morgan had, by leaps and bounds, the best overall careers of any Reds players.

I highlighted Ken Griffey JrÃ¢â‚¬â„¢s first line in Mariner green for one reason.Ã‚Â  Among all these great players, heÃ¢â‚¬â„¢s the only player examined that actually did worse with the Reds than with all his other teams.Ã‚Â  Robinson was better as a Red than an Oriole, Morgan was better as a Red than an Astro, and so on and so forth.Ã‚Â  This is likely why Reds fans may argue about the greatest Reds hitter.Ã‚Â  WeÃ¢â‚¬â„¢ve had so many great hitters who hit even better when putting on the wishbone C.

[AuthorÃ¢â‚¬â„¢s note: The idea for the additive method of the Ã¢â‚¬Å“SDAAÃ¢â‚¬Â figure came from an article I read at FanGraphs by Tony Blengino in November 2015 entitled Mike Trout, Four Years In. Go give that a read.Ã‚Â  ItÃ¢â‚¬â„¢s quite interesting.]

[Math note: The standard deviation of OBP and SLG used to deriveÃ‚Â SDAA was calculatedÃ‚Â from the sample of all player seasons between 1947 and 2015.]