Across the sporting world, frontrunners, bandwagoners and championship chasing fans are abhorred. Real fandom doesÃ‚Â not and will notÃ‚Â exist withoutÃ‚Â a strong, well-developed bond between fan and team. To cheer just for the sake of a victory shows the worst side of the human character.

That being said, with one of the most abysmal Reds’ seasons staring down our fan base, jumping on a bandwagon doesn’t seem like the worst thing to do. Whether it be a favorite son rooting interest (White Sox and Todd Frazier) or an underdog story (the Cubs against themselves), switching allegiances can bring happiness in an otherwise joyless world.

What if there were a third option? A new path where you don’t have to forsake the Reds, but you also don’t have sit through the summer angry, numb and slightly existential. Well, with Steph Curry in the NBA and Cam Newton in the NFL, 2016 is officially the year of the bandwagon superstar. These athletes don’t play for your favorite team, but have so dominated their respective sport that you can’t help but cheer for them. Also, they’re kind of seen as the underdog. You’ll never hear a pundit say Steph is better than LeBron, and Cam did drop the Super Bowl to Mr. All-Era Quarterback himself, Peyton Manning. These players give you an out: You aren’t a bandwagon fan, rather you just want to witness greatness on a historic scale. Who could have a problem with that?

Given that baseball is the only major league not to have a 2016 historic superstar (mostly because the season has yet to begin), I figured that a watch list was in order. TheseÃ‚Â guys, who are poised to break out, give Reds’ fans a welcome reprieve from Great American Ballpark’s daily drudgery.

Much like Steph Curry in the NBA, Mike Trout is far and away MLB’s best player, revolutionizing the game as he goes. Trout has already won one MVP award (should’ve been three) and can claim to be the most electric player in the game. Even just halfway through the season, Steph Curry is garnering calls to be named the Most Improved Player–one season removed from being MVP. Trout has a similar aesthetic where no matter how high he sets the bar, the next season it seems like he was just taking it easy on everyone else.

The only reason Trout can’t be the sole entry on this list is that he’s too easy a pick. What Steph and Cam are doing now, Trout did in 2012 when he won Rookie of the Year and finished second in MVP voting. He didn’t receive the same sort of awed recognition that Steph and Cam are because he was entirely unproven. The current incarnation of bandwagon fandom depends upon a superstar going supernova.Ã‚Â Trout’s already hit theÃ‚Â untouchable point that the other two are just now reaching; cheering for him to do more is having your cake, eating it and asking for another three cakes.

The formula for the bandwagon superstar depends upon three factors: a great but not historic previous season, moderate name recognition and a particular quirk upon which fandom can latch. The White Sox’s Chris Sale hits all three points and more with but one hitch: he’s a pitcher.

In the Age of the Pitcher, it’s hard to standout as a historically great hurler. When the threshold is so high (think of last year’s three way National League Cy Young race), bandwagon worthy seasons can be lost in the shuffle.

Sale’s 2015 was impressive with league-leading 274 strikeouts and 2.73 FIP, but a 13-11 record with a 3.41 ERA is not going to turn heads. He gets enough coverage to where casual baseball fans know him but baseball outsiders don’t, and Chris Sale has the greatest quirk of all: throwing sidearm. To truly become a bandwagon superstar, Sale will need to put up Nolan Ryan strikeout numbers while throwing multiple shutouts and no-hitters with a perfect game in the mix. Emulating Steph just isn’t an easy road for a pitcher.

Putting Correa on this list may seem ambitious considering he’s starting his second year in the league, but winning the American League Rookie of the Year is a good way to get all the name recognition you need. Correa’s .279/.345/.512 campaign is astounding, but there’s so much room for improvement. A full season may buoy his numbers a bit, but the wear and tear of the long grind could also bring him back down to earth. Correa is as much a dark horse candidate to fill this role in baseball as he is a new guy on the cusp.

Often described as well-rounded like Alex Rodriguez, Correa hasÃ‚Â an exorbitant ceiling but also a ridiculous floor. A-Rod was a (comparatively) scrawny kid when he broke into the league. Correa already resembles Steroid Era Rodriguez, raising the expectations of his abilities. In order for 2016 Correa to be seen as historic on the same plane as Steph and Cam, he’ll need to top A-Rod’s 1996, .358/.414/.631 that set the bar so high.

As we’ve seen with Steph Curry (and to a lesser degree, Cam), becoming an underrated superstar often becomes more feasible when you possess a unique skill set. Just as Curry’s long game sets him apart in the NBA, small ball could give an unconventional superstar MLB player an historic platform.

Both the Red Sox’s Mookie Betts and the Giants’ Joe Panik proved themselves last year to be good-to-great players (Betts garnering MVP votes; Panik named an All-Star), but neither were particularly historic. However, each has his own specific brand of small ball that can be translated into dynamic baseball with mass appeal. Betts is the prototypical leadoff man, playing centerfield with speed and decent on-base skills. Throw in a little pop (18 homers last year) and Betts becomes a Swiss Army knife player, able to fill any role in a pinch. Panik offers a different side of small ball, playing a strong middle infield and hitting for contact, if not power. Where Betts bests Panik is his speed, stealing 21 bases last season to Panik’s three.

That being said, while both players have the potential to be the next MLB dynamo, small ball just isn’t that compelling. A big part of the reason that Steph and Cam have acquired the following that they have is they’re taking the most exciting parts of their sports and adding an extra bit of flash. Dee Gordon tried to make small ball sexy last season and look how many fans that earned him.

Outside of Mike Trout, Kris Bryant is the most likely bandwagon superstar to emerge in 2016.Ã‚Â Yes, he plays for the Cubs. But he’s reigning Rookie of the Year, looks like a movie star and can hit the ball a country mile. If Bryant can cut down on his strikeouts, he couldÃ‚Â potentially have a season reminiscent of Trout’s sophomore campaign. Couple that with the ridiculous expectations for the Cubs’ season (a big part of the bandwagon superstar is the team’s success: Warriors are 49-5, Panthers were 15-1), and Bryant looks like the MLB’s next poster boy.

Steamer projects Bryant to slightly regress in his second season, predicting a .273/.360/.507 batting line. SteamerÃ‚Â also expects 31 homers, but if Bryant can top 40 and push 50, his superstar potential explodes. At base, Kris Bryant will be a fun player to watch in 2016, but if he wants to be the next Steph Curry, he’ll have to endÃ‚Â the Cubs 109 year exodus from the holy land.

Nothing describes the state of the Reds betterÃ‚Â than naming a pitcher with fewer than 100 innings under his belt as being the most likely to have a historic season. While Joey Votto would’ve been the easy choice given his superstarÃ‚Â status, hoping for him to top his 2010 MVP campaign not to mention some of the best seasons of all time is unrealistic. Iglesias has the highest ceiling of this Reds’ team simply because he is unproven but demonstrated glimpses of greatness. 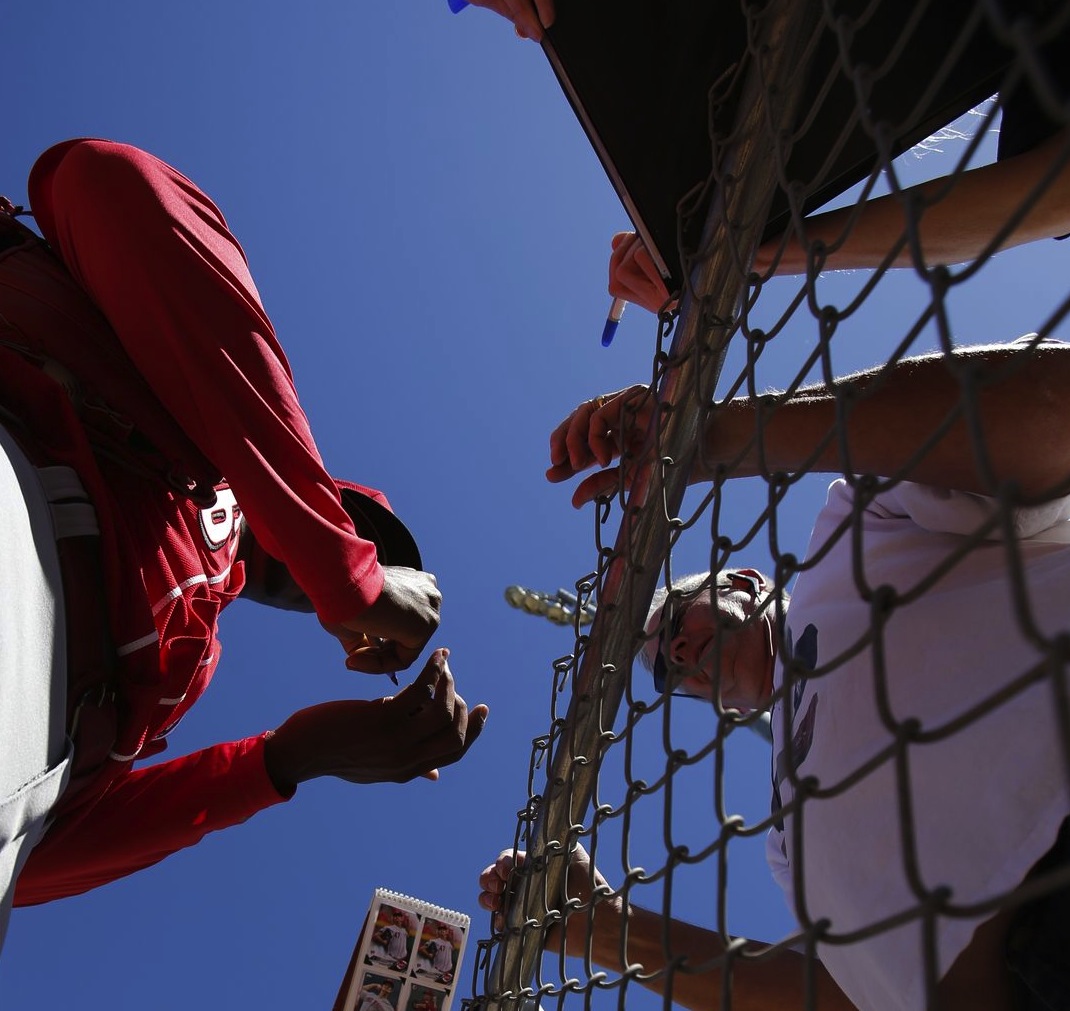 For Iglesias to become a superstar though, he will need to dominate on a level comparable to Clayton Kershaw or Jose Fernandez. With reports that he’s increased his stamina and worked out issues with his fluctuating velocity, Iglesias seems poised to be a strong top of the rotation candidate. Developing his slider into a more extreme strikeout pitch (51% of his strikeouts came on it) could also distinguish him in a league filled with exceptional pitchers.

In the meantime, remember that cheering for another team’s player isn’t bandwagoning,Ã‚Â it’s finding great baseball outside of a wall of mediocrity.