Homer Bailey had Tommy John surgery on May 8, 2015. Today, Reds Manager Bryan Price says [John Fay]Ã‚Â he expects Homer Bailey back around May 1.

Ã¢â‚¬Å“Homer just looks great,Ã¢â‚¬Â Price said. Ã¢â‚¬Å“HeÃ¢â‚¬â„¢s throwing. HeÃ¢â‚¬â„¢s done all the long-toss work. HeÃ¢â‚¬â„¢s been off the mound. You could make an argument that you can really rush him for Opening Day. But weÃ¢â‚¬â„¢re not going to do that. HeÃ¢â‚¬â„¢s coming off back-to-back elbow surgeries. WeÃ¢â‚¬â„¢re going to get him plenty of mound time and slowly integrate him into games.

That’s right around the date I guessed back in September. 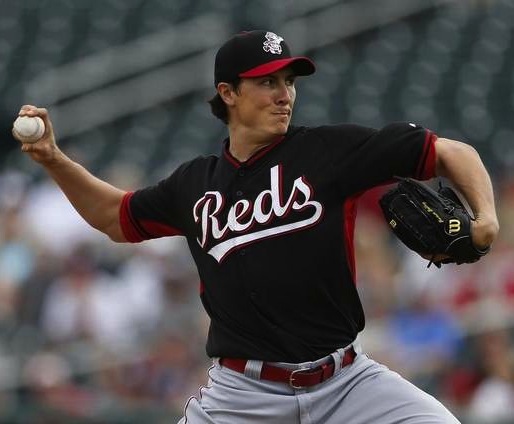 Zach Buchanan [new beat writer for the Enquirer]Ã‚Â reports this:

Bailey has had two bullpen sessions before reporting to camp, although has only thrown fastballs. The right-hander is throwing all his pitches off flat ground, though, and said his arm feels Ã¢â‚¬Å“like nothing ever happened.Ã¢â‚¬Â

Bailey is reporting [John Fay]Ã‚Â that he feels normal and that his recovery from Tommy John surgery has been better than expected.

Bailey has been surprised by how well the comeback from Tommy John has gone.

Ã¢â‚¬Å“I have been Ã¢â‚¬â€ quite a bit,Ã¢â‚¬Â he said. Ã¢â‚¬Å“I thought it was going to be a lot worse. But everything has gone really smooth.Ã¢â‚¬Â

The Reds are leaning on Bailey to lead the young pitching staff, and heÃ¢â‚¬â„¢s comfortable with that role. He was the one veteran at the Ã¢â‚¬Å“pitching summitÃ¢â‚¬Â the Reds held in January. Fifteen of the top prospects were invited as well.

It may take a while for Bailey to return to top form, but he’ll be healthy while doing it.

In BaileyÃ¢â‚¬â„¢s case, there may have been synergy between his two elbow injuries. His fraying ligament may have put more stress on the nearby muscles, causing them to tear. His weakened muscles would have provided less protection for the joint and could have contributed to his UCL ripping. The good news for Bailey is that studies of pitchers with flexor mass and UCL problems find that a similar percentage of pitchers return to full performance compared to those pitchers who just have TJS.

If you want to refresh your memory about the general prognosis for Tommy John surgery patients, and particularly Homer Bailey, you can read the full post.

Bailey’s fought several nagging injuries in 2014. But as the Reds fought to stay in contention through mid August Homer Bailey was at his best. Over his final seven appearances, starting with a 3-hit shutout over the soon-to-be World Series champion San Francisco Giants, BaileyÃ¢â‚¬â„¢s ERA was 1.62. In five of those seven starts, he gave up zero or one runs. In his last 2014 start, against Cleveland, he threw seven shutout innings with eight strikeouts and one walk. It’s hard to believe (or remember) now, but after that game, on August 7, the Reds were only 4 games out of first place.