The Reds team hall of fame is nothing short of incredible. What they have done to preserve the history of this great franchise is about as good as it gets. I haven’t been to every teams hall of fame, but it is hard to imagine one better than the Reds. For comparison, Ã‚Â I live in Cleveland. The Indians team hall of fame is located in centerfield of Progressive Field. They have a few plaques, and a couple of statues surround by shrubbery. It’s not a bad hall of fame, but it pales in comparison to the Reds indoor, year round operational HOF with 10 exhibits.

Beginning in 2007, new players began being selected to the Reds HOF by the fans voting every other year. It is fun for the fans to be able to participate and select their favorite players. It has however lead to some biased decisions, and some players selected more on popularity than actual merit.

Reggie Sanders was put on the Reds hall of fame ballot for 2014. Sanders was on the ballot with Ken Griffey Jr., Danny Graves, John Franco, and Jeff Brantley. The fans obviously selected Junior, and the Reds veteran committee decided to also add Ron Oster and Dave Parker that year.

I was only 8 years old when the Reds won the NL Central in the divisions’ inaugural season in 1995. The Reds went 85-59 in the strike shortened season, and easily won the division by 9.0 games. The Reds rolled through the Dodgers in a three game sweep, but were then swept themselves by the eventual World Series champions, the Atlanta Braves. The three things that I remember most about that season was Barry Larkin winning the MVP, the Reds 10-1 win at Riverfront Stadium to complete the three game NLDS sweep of the Dodgers, and the Reds cleanup hitter (Sanders) not being able to hit a high inside fastball in the playoffs. 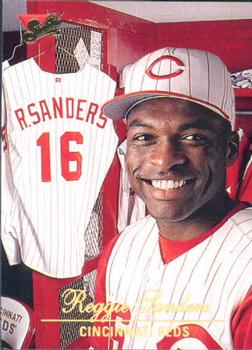 Fair or not, what is forgotten about Reggie Sanders is that he was actually really great for the Reds in 1995. During the regular season, Sanders was actually better than his teammate, Barry Larkin, who won the NL MVP.

Sanders would never have another year like 1995 with the Reds, but he put together 7 very solid years for the Reds. In each of his seasons in Cincinnati, he was an above average hitter (100 or better wRC+). Sanders’ 6.6 fWAR in 1995 is tied for the 26th best season ever among Reds position players. Despite playing in only 805 games as a Red, Sanders career 21.1 fWAR is tied for the 25th best among Reds position players.Ã‚Â And if you only look at outfielders, his 21.1 career Reds fWAR is in the top 10.

The numbers themselves certainly should put Sanders in the Reds HOF. Having an elite season like 1995, and being a top 10 outfielder should have got him a good look. What gets even more frustrating is when you compare Sanders to other recent Reds HOF members. Below is Sanders next to each member selected since 2010 with the exception of Jake Beckley, who debuted for the Reds in 1897.

The Reds do an incredible job with their hall of fame, and this summer will be especially exciting with the addition of Pete Rose. It is just a shame that Reggie Sanders got overlooked. Let’s hope it doesn’t take 100 years for a veterans committee to see this glaring error.