[This report was submitted by loyal Nation member and super Reds fan John Rohrig, who attends caravan events every year. Lots of great information. Thanks, John!] 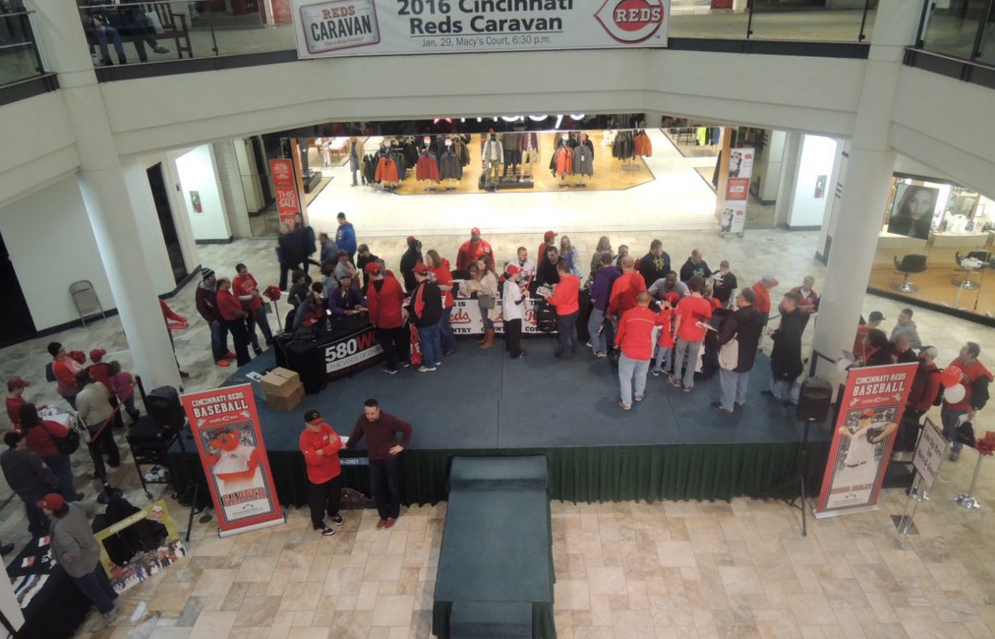 Last night the Reds Caravan East Tour rolled into Charleston, WV after a day of visiting Reds Radio affiliates in Southern WV and Eastern KY. A nice crowd awaited as the caravan participants entered to a warm reception. However, the crowd size was a bit smaller than usual this year due to weather and back-to-back losing seasons. About half of the 20 inches of snow we received last weekend remains.

Marty Brennaman was the emcee and introduced each participant. Marty worked the crowd like a master and got everyone in good spirits from the beginning. One question Marty answered was as to whether he would be in the radio booth after this season. In which his reply was, “I don’t know. I don’t know right now.”Ã‚Â Marty reflected back on his younger days as a baseball broadcaster with the AAA International League’s Tidewater Tides and visiting Charleston, WV when the Tides played the old Charleston Charlies.

As the crowd started through the autograph line, local sports radio broadcaster Jeff Jenkins of WCHS-AM radio was able to interview some of the caravan participants one-on-one and did his usual good job. Here are a few pieces of information I jotted down from a couple of his interviews.

When asked about the recently acquired Jose Peraza: We look at him as a long-term second baseman. He played 2B, SS, and CF in the minor leagues. He’ll compete for a spot. It’ll all come down to how he plays in spring training whether he begins the season at the Major League level or at AAA.

When asked about the LF situation: We have four players who will compete for that spot. Adam Duvall, Jake Cave, Scott Schebler, and Yorman Rodriguez. They all have an opportunity to claim the spot with their play in spring training. Or it might come down to a platoon situation. That is something will be decided from spring training. (No mention of Jesse Winker, hmm).

When asked about the closer situation: It will be an open competition. Wide open.

As an example Krall said he expected Garrett, Travieso, and Romano would start the season at AA Pensacola, but he added and emphasized that it all depended on how well they pitched in spring training.

When asked about SS Zack Cozart and Homer Bailey, Krall said that Cozart is on schedule and should be ready to return when spring training starts. He said that Homer Bailey also is on schedule, but that his expected time of return is the end of May.

When asked about whether C Devin Mesoraco would see any time in LF this year: Devin is doing very well right now. We will evaluate him and his progress throughout spring training. We have talked just a little about that just in case though.

When asked if there might be any transactions or trades between now and Opening Day: Nothing is imminent. Nothing right now. There will be some low cost or minor league signings like we did with Jonathan Sanchez earlier today. But nothing major is imminent.

When asked about what he though about the upcoming spring training: Wow. They have as many as 12 jobs open for players to compete for and make the 25-man roster out of spring. That is just unheard of in today’s game.

When asked his thoughts on the Reds re-build: I don’t want to call it a re-build, I want to call it more of a re-model. They still have Joey Votto, Jay Bruce, Zack Cozart, Brandon Phillips with Homer Bailey returning from injury. Eugenio Suarez is there. I think this team will be better this year than last year.

When asked if he thought the re-build, or re-model was started a year too late: There might be be some regrets in the front office about not starting this last year. In hindsight.

When asked if ownership has much say in the trades the Reds make: Ownership has a lot of say in trades. As with most teams.

When asked about trading all these Reds fans’ favorite players: You know, when you have a core group of players like the reds did for several years, and they just didn’t win enough, and contracts coming to an end, it’s time to break them up a little bit.

When asked who he thought might win the closer’s job: I’ll whisper a name to you, because I don’t want him to hear it and be thinking about it. Michael Lorenzen. I know they are grooming him as a starter though, I was very impressed with his September and his work out of the bullpen. His stuff and his demeanor are suited very well for the back end of the bullpen.

When asked about Billy Hamilton: I think Billy is going to be better. Billy Hatcher has been working with him and is kind of going to be his personal coach. Aside from returning from his shoulder injury, there are no physical adjustments Billy needs. Billy needs an approach adjustment and that is where Billy Hatcher is helping him.

There were quick interviews with the others, but these two had the most information in them I wanted to pass along. The major takeaways from last night were that the play of many of the players in spring training is going to be a huge determining factor on what the Reds 25-man roster will look like on Opening Day. And also their AAA and AA teams. There is excitement that 2016 is going to be much better than 2015. There is going to be a lot of competition among many players for many open job opportunities. This may very well be the most important spring training for the Reds organization since the turn of this new century.

A lot at stake. A lot to be decided. Welcome to the new window of opportunity.