A week before Christmas, it seemed the Reds had lost their version ofÃ‚Â That Guy–or should I say Dat Dude. The deal had been confirmed, the teams were in agreement, the tweets had been sent, but…nothing. Now with the Nationals’ signing of Daniel Murphy, the Brandon PhillipsÃ‚Â trade train will sit comfortably in the station for the foreseeable future. The entire sequence of events that culminatedÃ‚Â in Dat Dude remainingÃ‚Â a Red after breaking the story of his own trade and then refusing to waive hisÃ‚Â no-trade clause isÃ‚Â the pinnacleÃ‚Â That Guy momentÃ‚Â in a career full of them.

For the past ten years, Brandon Phillips has been the Reds’ defensive savant (four Gold Gloves), at times an above average bat (one Silver Slugger), but mostly the resident clubhouse goofball. From helping revolutionizeÃ‚Â how athletes use Twitter (@DatDudeBP) to shunning all Cincinnati media, Phillips has made waves over the years, cementing his place in Reds’ folklore along the way. He’s long been That Guy for the Reds in a way only he could be. In light of recent events, I’ve tried to compile the most memorable timesÃ‚Â when Brandon was That Guy (no, the botched trade is not included because…well I don’t have a reason, it just isn’t).Ã‚Â What follows is a list neither exhaustive nor entirely baseball focused but is most definitely #ALLREADY.

To start anywhere other than one of BP’s many absurd defense plays would be lunacy. Dat Dude is datdude because of his fielding. It’s the reason he’s won four Gold Gloves (should be five), the reason the hashtag #ImGlovinIt exists, and the reason John Kruk has retained his job with Baseball Tonight (just go with me, it makes sense). BP is to impossible glovework as Steph Curry is to long-distance three’s. To narrow all of the highlights down to just one defining web gem just cannot be done.Ã‚Â Or can it?

Of all the plays Brandon Phillips has made over the years, only one has been uniquely made by him. Bare-handed jump throws? Difficult, but frequent. Behind the back double play starter? Happens about once a week. No-look catch over the shoulder? Cool, but Willie Mays did it first. And don’t even ask about ricochets off the pitcher because Asdrubal Cabrera reigns king in that realm. No, the only play that is singular to Brandon Phillips is the charging, between the legs, no-look flip to first.*

All you need to know about the play is a) Jason Bourgeious is really, really insanely fast, and b) Joey Votto’s reaction is that of Ã‚Â a kid who has just been told he can keep all of his Halloween candy. The magic of the playÃ‚Â liesÃ‚Â not in the play itself but in its circumstance. Between the legs is cool and all (basketball players do it all the time), but then you realize it’s a do or die play and BPÃ‚Â optsÃ‚Â for the single most difficult technical flip to execute it.Ã‚Â Also, BP outdid himself two years later when he again flipped the ball between his legs, but this time started a 4-6-3 double play.

*Yeah, Mark Buehrle might have lucked himself intoÃ‚Â this same play a year earlier, but does a bumbling, flailing blind luck successful attempt really top the coordinated skill of BP’s play? I think not.

Currently atÃ‚Â 910,000 Twitter followers, Phillips is no longer atop any most followed lists, but a few years back, he was one of the few influential athletes on the site. Phillips used Twitter to connect with fans through mostly playful banter andÃ‚Â hosted frequent contests, giving winning fans game tickets or autographed memorabilia.

Yet, back in 2011, Phillips once again became That Guy when he attended then fourteen-year-old Connor Echols’ baseball game after the young man reached out through Twitter. Going above and beyond his contracted duty to the young fan, Phillips showed up at the game and watched Echols go 3 for 5, signing autographs for all the players afterward. Four and half years later, Phillips might have lost some of that goodwill with Reds’ fans but Connor Echols is playing baseball at Dayton so we’ll call it even?

That Guy who just really does not like the Cardinals

We all remember it: the Great Brawl of 2010. The brawlÃ‚Â that ended Jason LaRue’s career and branded Johnny Cueto negatively for the rest of his. The brawl that saw Chris Carpenter and Scott Rolen morph into mirror images of the same scruffy, irate white guy. The brawl the Jonny Gomes ripped his jersey in (which in hindsight was probably less a byproduct of the brawl and more just because Jonny Gomes wanted to rip his jersey).

Outside of the brawl’s outcomes, most of us remember it for its instigators: BP and the Cardinals’ own, Yadier Molina. Even five years later, BP’s name-calling of the Cardinals resonates with Reds’ fans. Despite the lack of fan-friendly language, Phillips’ choice words accurately described the feelings that many fans have for the St. Louis team and endeared the second baseman as that guy whoÃ‚Â cares as much as the fans do.

That Guy whoÃ‚Â refused to talk to the media

What most people forget about being That Guy is the distinction can be achieved through disgust as easily as through admiration. Being That Guy does not necessarily shield you from criticism, and sometimes it invites criticism instead. Unfortunately,Ã‚Â Dat Dude has become all too familiar with unwanted notoriety over the years.

First, there was the incident with the Cincinnati Enquirer‘s C. Trent Rosecrans. After a pair of seemingly innocuous tweets about BP’s OBP, Phillips lit into the reporter during a post-game interview with Dusty Baker. Using some particularly choice words, Phillips became That Guy who can’t hold his tongue amidst negative claims.

Then, prior to the 2014 season, That Guy reared his head again when Phillips swore off talking to the Cincinnati media. Once again, Phillips took exception with some writing that claimed he was declining as a useful Major League baseball player. Regardless of whether the claim of deteriorating skills was factual (BP’s 2014 and the general process of agingÃ‚Â support it) or not (his 2015 makes a convincing counter), not talking to the media because he didn’t like what they said was the grown up equivalent of BP putting fingers in his ears and shouting. And while sometimes we all wish the media would just stop talking already, BP’s way of handling criticism probably wasn’t the best.

Sometimes, even That Guy can defy the already low threshold of expectations and maybe that’s why Brandon goes by Dat Dude. Over the years, BP’s antics have gotten so weird that even this column dedicated to his weird antics needs a catch-all bucket.

Remember that one time the BP tagged Jonathan Villar between his legs (I sense a theme), and Villar slid face first into BP’s posterior?

OrÃ‚Â that time that Brandon dressed up as Devo with Shane Victorino, Justin Upton, Evan Longoria, and Giancarlo Stanton? 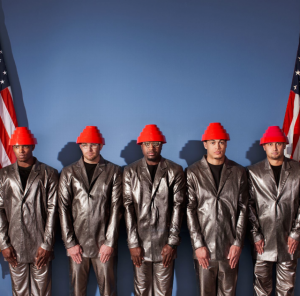 Photo from ESPN the Magazine via datdudebp.com

What about whenÃ‚Â Phillips got himself out by high-fiving Yuniesky Betancourt? They say you can’t predict baseball, but I can’t help but wonder if they ever expected someone as unpredictable as Brandon Phillips when the phrase was coined.

At the end of the day, the most That Guy thing Brandon Phillips has ever done was entirely out of his control. Picked up by Cincinnati from the Cleveland Indians for the infamous player to be named later, Phillips launched his career with the Reds and became the 31st player to join the 30/30 club just one year later. That the PTBNL ended up being Jeff Stevens, a pitcher who just sniffed the bigs with the Cubs, made the trade one of the most lopsided in the history of baseball.

In the ten years that followed, Phillips has become as large a part of the Cincinnati landscape as Skyline Chili. Okay, maybe just Gold Star Chili, regardless; he loves the city and the city (mostly) loves him. Calling Reds owner Bob Castellini a liar (twice)Ã‚Â didn’t exactlyÃ‚Â help endear BP to Cincinnati, but Phillips will always be a fan-favorite for his charisma.

Maybe this post is premature. It was initially written as a response to Phillips’ trade,Ã‚Â and since Phillips is still a Red and looks to stay so for the immediate future, the timing might be a bit forced. But with the franchise finally (trying to) commitÃ‚Â to moving on from the old guard, it only seems right to honor that core. Whether on the field or off, Phillips isÃ‚Â a Red through and through, giving his all (yes, his all) to the organization and forever stayingÃ‚Â Dat DudeÃ‚Â for an entire generation of Reds’ fans.