On Friday, October 30, 2015, ESPN decided to permanently suspend publishing at Grantland, a sports and pop-culture site run by the company. Grantland, the brainchild of personality and writer Bill Simmons, had been publishing since summer of 2011. For many of us who followed the site, it had become more than that. Grantland was less an impersonal content-carrier and more an insightful friend. 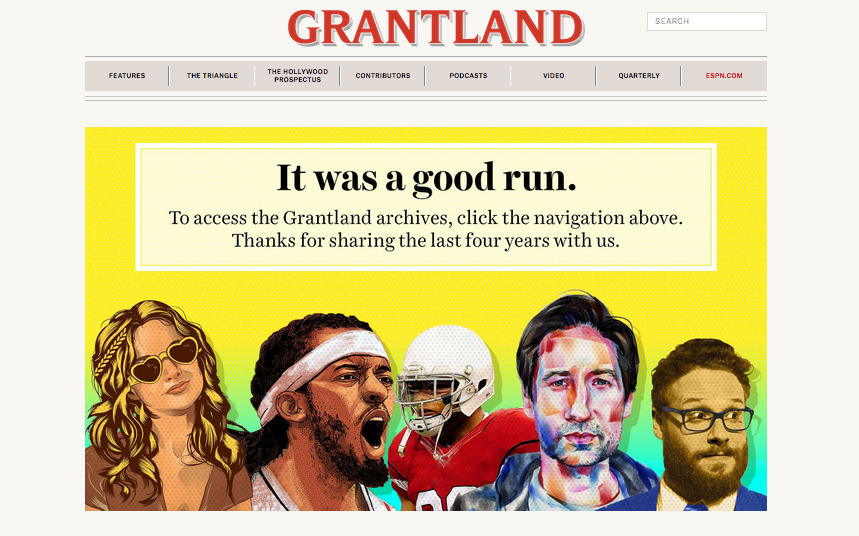 The last time I saw Grantland, I was drinking my morning coffee before a 9 a.m. class. I hadn’t seen him in a few days because of meetings and work and the general business of life, but I was determined to take a moment and catch up. I asked how he felt about the World Series; we were two games in and I hadn’t seen him after all. He didn’t miss a beat, rattling off praise after praise for former Red Johnny Cueto, knowing I was a fan. “Johnny Cueto steamrolled the Mets,” he began, oozing with admiration. “He did so by defying everything we know about pitcher dominance.”

He then tried to explain to me how the Mets could beat young hothead Yordano Ventura at Citi Field. It all had to do with psychological warfare, he asserted. “The Mets should call Yordano Ventura ‘Jordi’ or ‘Dan’ or something that sort of sounds like his first name but actually isnÃ¢â‚¬â„¢t,” he said, keeping a straight face the whole time. I started laughing so hard I nearly spilled the coffee over my laptop keys. That was the beauty of Grantland: he never took himself too seriously. He could go on for hours about the issues of the day, but he also never suppressed the urge to try some terrible, terrible jokes. That’s what I loved about Grantland. That’s why he was my best friend.

I remember meeting Grantland back in 2011, first introduced to me by a distant friend by name of Bill Simmons. I knew Bill just through acquaintances: he talked basketball with some friends and kept up a mail correspondence with others. Personally, I found Bill to be an insufferable, pretentious windbag, but I had to admit that his writing was ingenious. When he introduced me to Grantland, I had my doubts to be sure. “Grantland?” I remember saying, “Isn’t that the sportswriters’ name?”

With sigh and resigned breath, both Bill and Grantland shrugged, and then the younger said, “My parents liked the name. I had no control, man.”

I got to know Grantland over the years, becoming so much closer with him than I ever was with Bill. Back in the earlier days–I guess when he was still trying to impress me–Grantland would do this bit where every morning he greeted me with a recap of what had happened the night before. I remember this one time Grantland cracked a joke about the Cardinals after they had moved up in the Wild Card race. He tried to convince me without any hint of deceit or sarcasm that “manager Tony LaRussa had a plan. ‘To catch a wild card, you must become a wild card,’ [LaRussa] said. [LaRussa] then put on a Queen of Spades costume and began cackling in the dark.” To be honest with you, I don’t know what’s more amazing: that Grantland could capture La Russa’s essence without ever having met the guy or that I remember that quote word for word four years later.

I still think my favorite Grantland story is the time that he tried to pick the “winner” of 2011, as if there could ever be a winner of a year. And then he did it again…and again…and again. It was spectacular really, the dedication that Grantland had. Even something as trivial and frankly irrelevant as “Who Won 2011?,” he put his heart and soul into. People saw that and they appreciated it. Everyone appreciated the work that Grantland put in.

And that’s not to say that Grantland wasn’t skilled either. Despite his joking nature, the man could write and produce amazing things. He taught me about basketball in the Phillipines, about a food-centric rapper, and about the time that a basketball team won a game with only three players on the floor. He took me into the mind of Lin-Manuel Miranda and to the streets of Ferguson. Grantland never shied away from the hard topics and always, always spoke his mind.

But Grantland wasn’t perfect. Like all of us, he messed up. There was that one time with Dr. V’s magic putter. He apologized profusely for that. And then there was that time he (but mostly Bill) accused Roger Goodell of lying. That was probably the beginning of the end for Grantland. No one believed in him the same way after that.

Looking back on the life of Grantland, I have to say that his best quality was that he always wanted you to meet his friends. He made sure that they knew that he believed in them and that you knew that you should too. Without Grantland, I never would’ve met Rembert Browne. I never would have met Shane Ryan. I never would have met Shea Serrano or Emily Yoshida or Amos Barshad or Bryan Curtis or Molly Lambert or Alex Pappedemas or Louisa Thomas or a host of other people that I’m not sure now I can live without. They became just as large a part of my life as Grantland was.

Just take for example the book I got in the mail just last week. It’s Shea Serrano’s The Rap Year Book. When I bought it, I had never read a page, never seen an illustration, didn’t even fully know what the book was about. But Grantland told me that Shea could write and that I would enjoy the book, and I believed him, spending ten dollars on good faith alone.

Before I met Grantland, if you had told me that I would pre-order a book on rap written by a former Houston teacher, I might not even have deigned to laugh. I probably would’ve just put as much distance between me and you as possible because that idea was ludicrous. After Grantland, nothing seems more logical than that.

And that’s why I love Grantland. Because he taught me to embrace my weirdness. Because he showed me that there was a place in the world that accepted thinking unconventionally, maybe even encouraged it. Grantland taught me that I could write serious pieces about real social issues and write about the baseball card collection I just unearthed in my basement. Grantland taught me that as long as I focused on my craft while staying true to myself, writing was a viable option. Grantland opened so many doors for me without ever intentionally doing so.

In a world post-Grantland, none of that disappears. I still know that I can be writer without having the reassuring calm that was Grantland’s presence in my routine (in the four years I knew him, he never missed our morning coffee date). Just last week, I published my first long-form piece. Without Grantland, that would have been unthinkable. Without Grantland’s encouragement, I guarantee I would have given up on this whole writing thing long before the idea of a long-form ever blossomed.

They say that a funeral is a place to celebrate the life gone too soon, not to mourn its death. But you can’t have one without the other. So yes, Grantland lived and lived well, but with his death, there is a definite void in the lives of millions, myself included. That sounds melodramatic because in the grand scheme of things, Grantland was just another one of us trying to make it. In the end, he was too weird for the mainstream and couldn’t last because of it. But it’s not hard to find Grantland’s lasting impact. It’s not hard to know that when the “One Great Scorer” looks at Grantland’s name on the list, He may put a tally in the loss column, but He can never deny that Grantland played the game the right way. It was a good run indeed.