Make sure your seat belts are securely fastened.Ã‚Â

The Reds have taken off on a flight to a new and better day. With the trades of four starting pitchers in the last year, they’ve begun the process of rebuilding the team. WeÃ‚Â fans need to strap in and prepare for the ups and downs.

Insert the metal fittings one into the other.Ã‚Â

Throughout the Bob Castellini ownership era (2006-2015), the Reds offseason strategy with respect to payroll has been fairly straightforward. The Reds owner would whisper an Opening Day dollar figure in the general manager’s ear and within that constraint, the GM would make the Reds as strong as possible for that upcoming season. Other than an occasional Byrd hitting the windshield, the process has been smooth flying.

Tighten by pulling on the loose end of the strap.

But the Reds strategy this offseason will produce a different budget dynamic and trigger apprehension among the fan base while it plays out.

We suggest that you keep your seat belt fastened throughout the flight, as we may experience turbulence.

This chart shows the Reds payroll from 2006 to 2015 (blue bars) and also the average MLB payroll (red bars) for those seasons, in millions of dollars. 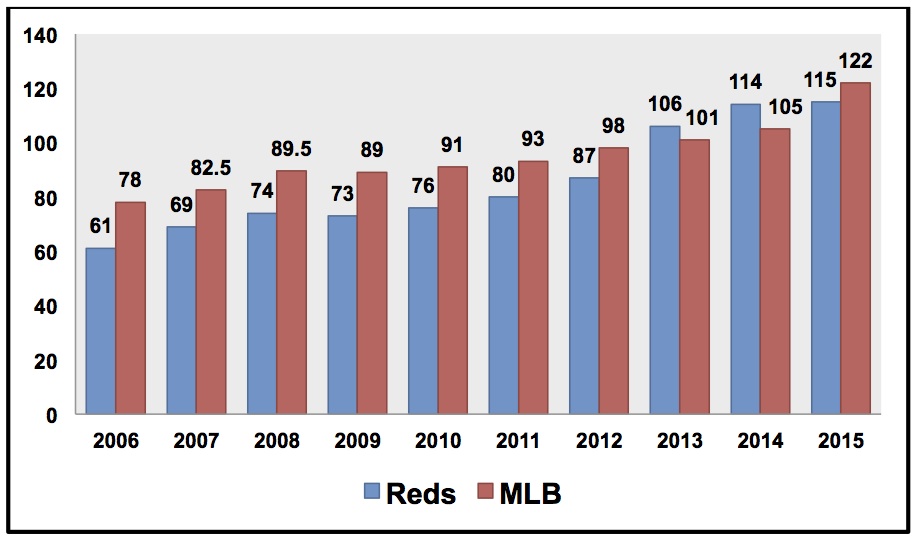 Over the first six years of Castellini’s stewardship, the Reds payroll remained substantially unchanged in relation to the rest of the league. Beginning in 2012, the Reds began to catch up. And for two years, 2013-14, the Reds payroll was actually higher than league average. In 2015, while the dollar value rose slightly in absolute terms, the Reds payroll failed to keep up with the surging MLB average – a number that jumped an incredible $17 million per team.

The second chart takes that data and shows the percentage difference between the Reds payroll and the MLB average. For example, in 2010, the Reds payroll was 16 percent below league average. In 2014, it was 9 percent above. 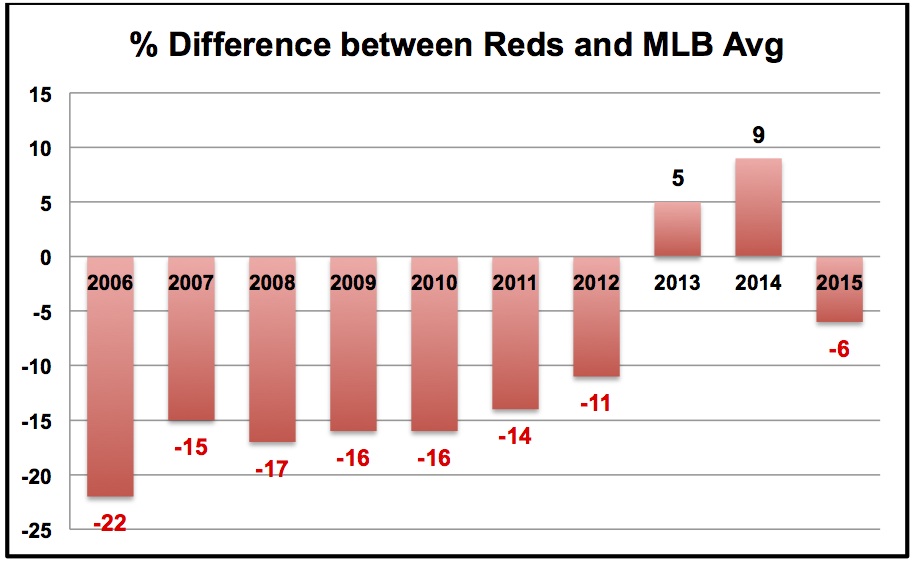 Based on past practice, a reasonable bump in payroll (an average increase of the previous five seasons) would put the 2016 figure in the $120-125 million range. That number depends on several factors,Ã‚Â the most important of which are: the expected bump in local television revenues from a new contract that begins in 2017, attendance projections and growing revenues from MLB’s revenue sharing and digital platforms.

Rebuilding or rebooting or retooling is the plan for 2016. That strategy will produce the near certainty of more trades and a less clear budget outcome.

Let’s look at the Reds payroll situation heading into 2016.Ã‚Â For this purpose, assume a baseline roster for the Reds on Opening Day of:

The Reds need to add another outfielder, presumably a starting LF ahead of Duvall. The baseline assumes the club doesn’t pick up the option for Burke Badenhop or Skip Schumaker. It assumes they DFA Brennan Boesch, Ryan Mattheus and Sam LeCure, who are arbitration eligible. Homer Bailey won’t be ready until May. You can swap pitchers between the rotation and bullpen, say Brandon Finnegan for Michael Lorenzen or John Lamb and it doesn’t affect the salary bottom line.

To be clear, this baseline is not a prediction, it’s a device. It presents a non-intervention baseline from which one can evaluate adding and subtracting players.

Next, let’sÃ‚Â break down that roster based on contract type.Ã‚Â The Reds have seven players under guaranteed contract for 2016. The total salary for those players grows from $56 million in 2015 to $80 million in 2016. [All salary data from Cot’s Baseball Contracts and Baseball Prospectus.]

With the baseline roster, theÃ‚Â Reds would have four players eligible for arbitration. Using estimates from MLB Trade Rumors, the four players would earn $17.8 million, an increase in $6.4 million in their salaries compared to 2015.

These salaries are eliminated from the Reds 2015 Opening Day roster and guaranteed contracts in the minor leagues and disabled list: 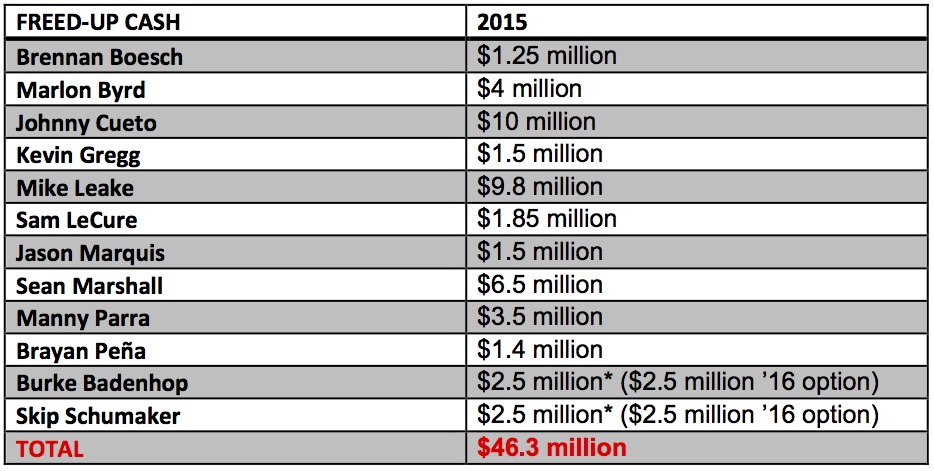 The baseline roster costs $104.3 million – $80 million from guaranteed contracts, $17.8 million for arbitration-eligible players, and $6.5 million from pre-arbitration players. The new LF probably won’t be at league minimum unless it is Jesse Winker.

Trading four-fifths of the 2014 starting rotation created anxious moments for Reds fans. Think of that as a bumpy take-off of the flight to rebuild the Reds.

Aroldis Chapman is the most obvious piece to move from the baseline roster. His Reds contract expires after 2016. Trading Chapman should net two excellent prospects and clear $13 million in payroll.

Brandon Phillips is another candidate to trade. While the Reds second basemanÃ‚Â has the right to reject any deal, he may be interested in playing for a contender. Phillips’ contract, which runs through 2017, is right around his value. The Reds could move him as a salary dump or cover some of his contract to gain a prospect in return. Given the PR hit the front office will take in moving a fan favorite, the latter course would be more likely. Say the Reds net a good prospect and clear $9 million in 2016 salary.

Beyond Chapman and Phillips, traveling further along the rebuilding path would mean shopping Jay Bruce and Todd Frazier. Both are under Reds control through 2017. Bruce is more likelyÃ‚Â of the two to go. After all, Todd Frazier is the Home Run Derby champion. Zack Cozart would be on the trade list were his return from serious knee injuries more certain.

Keep in mind these moves will be driven by the imperative to rebuild, not to save money. If the Reds wanted to continue past practices, they could afford to keep all four of Chapman, Phillips, Bruce and Frazier and still have enough cash left to sign one-year contracts with a veteran pitcher and/or a place-keeping left fielder. But that’s not going to happen. Two or three of those four players will be wearing other uniforms in April.

The jittery take-off and uneasiness from the changes during the mid-air portion of the trip aren’t the end of the turbulence Reds fans will have to weather. There’s the important matter of the landing. Trading Chapman and Phillips, or Chapman and Bruce, would produce savings of approximately $25 million. Trade Chapman, Phillips and Jay Bruce and you’ve got an extra $35 million with which to play. Add in the difference between the baseline ($104 million) and straight-line estimate ($120-125 million).

Here’s the $40-55 million question: What will the Reds do with the new money at hand to build a better team?

Assuming the Reds are tacitly writing off the 2016 season and are targeting 2017, they could go in several directions spending their windfall:

A. They could pocket the savings to use for 2017 and future seasons;

B. They could acquire an important piece or two that would generate production and create salary commitments in 2017 and beyond. For example, the Reds could sign Justin Upton or Jayson Heyward for five years, trade for Christian Yelich; or

C. The Reds could use up much of the surplus signing a pricey long-term extension with Todd Frazier. (As bad of an idea now as it was a year ago.)

Again, the rebuilding trades aren’t necessary to cut payroll. They actually should create a surplus.

That’s a lot of uncertainty – more than recent off-seasons.

Reds fans must hope the team has a smart flight plan and the front office is able to execute it competently.

For your safety and comfort, please remain seated with your seat belt fastenedÃ‚Â until the General Manager turns off the Fasten Seat Belt sign. This will indicate that we haveÃ‚Â parked at the gate and that it is safe for you to move about.Ã‚Â On behalf of GABP Airlines and the entire crew, thank you for joining us on this trip and we are looking forward to seeing you on board again in the near future.

Have a nice day.