Could the Reds trade Brandon Phillips this offseason?

Moving Phillips for younger players and clearing out his salary would be a logical step in their rebuilding program. If Zack Cozart comes back healthy enough to play shortstop or second base, the Reds could use Cozart and Eugenio Suarez in some combination in the middle infield.

The Reds tried to trade Phillips in the 2013 offseason after his negative comments about owner Bob Castellini andÃ‚Â profane outburst directed at reporter C. Trent Rosecrans. Like many people, I had Phillips ticketed out of town. But it turned out the market that the Reds had hoped for wasn’t there. Phillips had lost much of his production playing injured throughout the 2013 season. With his large contract extending for an additional four years, teams were reluctant to part with anything of value for his services. The Reds were unwilling to take the PR hit of dumping their popular second baseman without getting a splashy return.

Then in August 2014, Phillips qualified for full no-trade protection under the Collective Bargaining Agreement. Players with 10 years of major league service time, including five with their current team, earn that right. Phillips can refuse any trade the Reds might make, which complicates the prospect of moving him. To make matters worse, the Stone Mountain, Georgia native continued his decline in production in 2014.Ã‚Â Conventional wisdom hardened that Phillips’ contract was under water.

But as Reds fans know, Phillips put together a surprising, bounce back season in 2015. Despite that, analysts continue to assert that Phillips has negative trade valueÃ‚Â andÃ‚Â that the Reds would have to cover some of his remaining contract to move him.

Phillips is past the age when a second baseman typically enters the steep part of his aging curve.

Prior to the 2015 season, Phillips’ career had been conforming to the norm of a gradual decline in WAR. 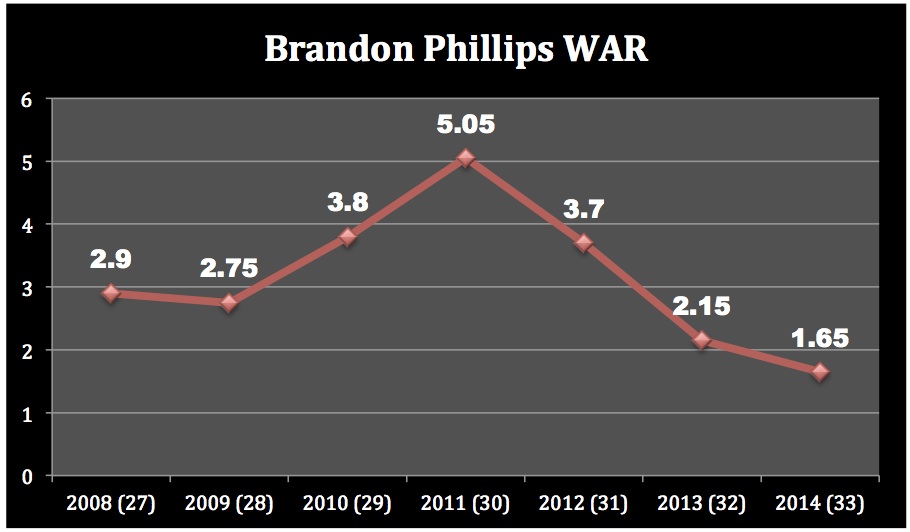 [Reminder that WAR – wins above replacement – takes into account hitting, running and defense. It consolidates a player’s relative value into one figure. The horizontal axis in the chart aboveÃ‚Â plots the season and Phillips age. The WAR values are an average of FanGraphs and Baseball-Reference.]

Phillips had exhibited steady, normal decline between 2011 and 2014, starting with his age-31 season. But a funny thing happened on the way to the scrapheap. 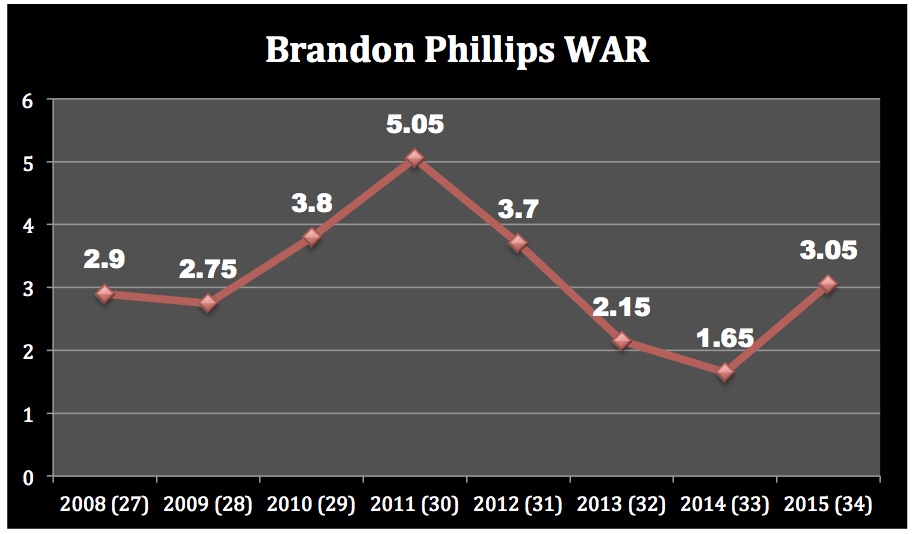 Did Phillips adjust his game to create a new normal in 2015? Let’s analyze his season to see where his gains were made.

It wasn’t in power. In fact, 2015 was the season when Brandon Phillips transition to a singles hitter became complete. His isolated power (ISO) continued its decline to .100. Phillips’ ISO was lower than Mike Leake’s. Out of 141 major league hitters with 500 plate appearances, Phillips ranked #125 in power. His ratio of extra-base hits to hits overall fell sharply to a career low. 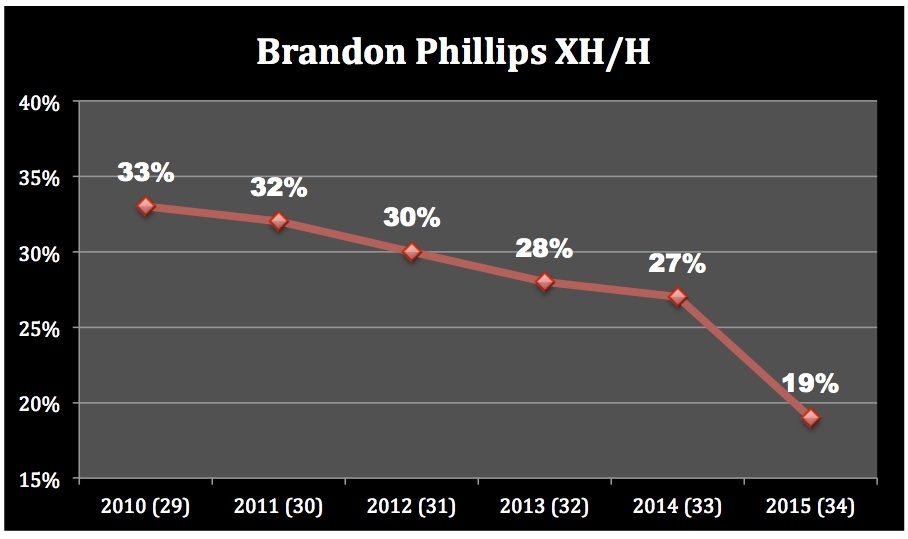 19 percent of Phillips’ hits in 2015 went for extra bases. The major league average is 33 percent.

Phillips started to swing more. Many aging players do this to compensate for slowing reaction time. His pitches per plate appearance (P/PA) fell from 3.68 to 3.47. The major league average is 3.79. Phillips ranked #131 out of 141 Ã‚Â in P/PA among qualified major league hitters. His swing rate (55.1 percent) was the highest in his career and ranked #133 out of 141 in the majors (Marlon Byrd led MLB in swinging at the most pitches).

Swinging early and often sent Phillips’ already low walk rate to 4.3 percent, the lowest of his career (MLB average is 8.3 percent). But it also dramatically cut into his strikeout rate, so in total he put many more balls in play.

Phillips did have success hitting singles. His batting average (.294) was 30th best out of 141 qualified players.

Phillips’ batting average on balls in play (.315) was well above his career average (.294). Normally when a player has a season where his BABIP is that far above his normal rate, the variation is attributed to good luck. In this case, however, the player had substantially changed his approach to swing for singles. That adjustment could explain a higher BABIP. Phillips also hit fewer fly balls as a percent of balls put in play.

The “new” BP who focuses on making early contact might sustain a higher BABIP than the Brandon Phillips who swung for power in previous seasons.Ã‚Â But his low walk-rate meant that his OBP (.328) was below league average for qualified hitters.

When you put all the offensive numbers together – power, average, walks – Phillips provided average run production. Here are his weighted, adjusted runs created (wRC+) numbers dating back to 2007. 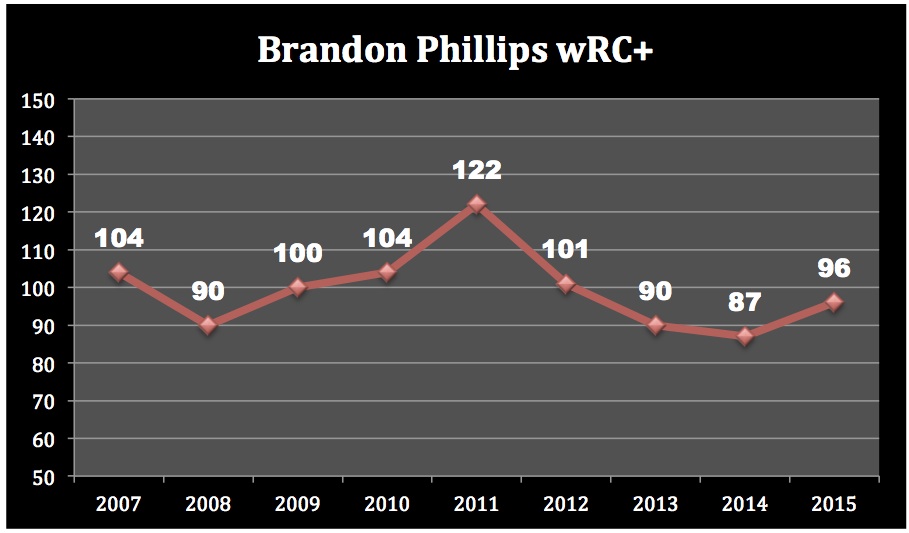 Reminder: With wRC+, 100 is league average, and adjusts for run environment and ballpark.

In 2015, Brandon Phillips still put up positive defensive numbers, despite a decline in range. FanGraphs’ composite defensive value number for Phillips has declined from 13.4 (2011) to 4.1 (2015). But 4.1 is still pretty good (#9 out of 20 qualified 2B). That’s consistent with other defensive metrics like UZR/150 and Defensive Runs Saved.

Is Brandon Phillips’ contract upside down?

Based on last season’s free agent market, teams are payingÃ‚Â $7.5 millionÃ‚Â for each WAR. That figure rises each year because of higher revenues in the sport chasing the same number of players. With a salary of $27 million over the next two seasons, Brandon Phillips would need to produce a total of 3.6 WAR to be worth his contract.

That’s not an unreasonable number if his bump in 2015 turns out to be a new starting point to glide down the aging curve. One could make the case that Phillips has reset his offense in a way that provides more value and his defense is still, for the moment, above average. If he experiences a 20 percent decline from his 2015 level in each of the following two seasons, he would produce about 4.4 WAR, worth $33 million even without considering wage inflation.

Much depends on Phillips’ ability to stay healthy. Using the principle of selling high, this offseason will likely be the Reds best chance to move Phillips. If they find the right fit, the Reds might get a decent young player in return. But clearing Phillips’ $27 million salary would allow the club to sign other free agents. Even if the trade didn’t directly produce a contributing player, it would help indirectly.

The Reds could wait until the 2016 trade deadline or next offseason. But that would be gambling with Phillips’ health. Phillips has cheated Father Time for now. But the underlying numbers – declining power, declining walk-rate, swinging at more pitches – continue to show normal aging-related decline. Phillips figured out a way to keep his head and contract above water for now, but that’s not going to continue indefinitely. The bottom could fall out suddenly.

One remaining question is would Phillips accept a trade? He has deep roots in Cincinnati. But with the Reds heading into a rebuilding phase, Dat Dude might be interested in taking his talents elsewhere. It’s not hard to imagine him swayed by the opportunity of suiting up for a team with a real chance of playing in the postseason spotlight.