What if I told you, back in 2010, that Edison Volquez would be starting the first game of an LCS five years later? And that he would go 6.0 shutout innings, striking out four but, true to form, walking four as well? Would you believe me?

I wouldn’t have believed me, but there he was last Friday night, taking the bump for the Royals in the 2015 ALCS as I watched from behind the Kauffman fountains.

To rewind this story a bit, finding myself in Kauffman Stadium for Game 1 of the ALCS was bizzare enough. Not four days before, I had never even thought of going to Kansas City and instead had plans for a weekend trip to Chicago. But plans, as they tend to do, fell through,Ã‚Â  and so my friend and I scrambled to find an alternative way out of St. Louis. Come Thursday morning, we determined we would be crashing in Kansas City for the weekend on the air mattress of my friend’s friend (also named Wesley). We had 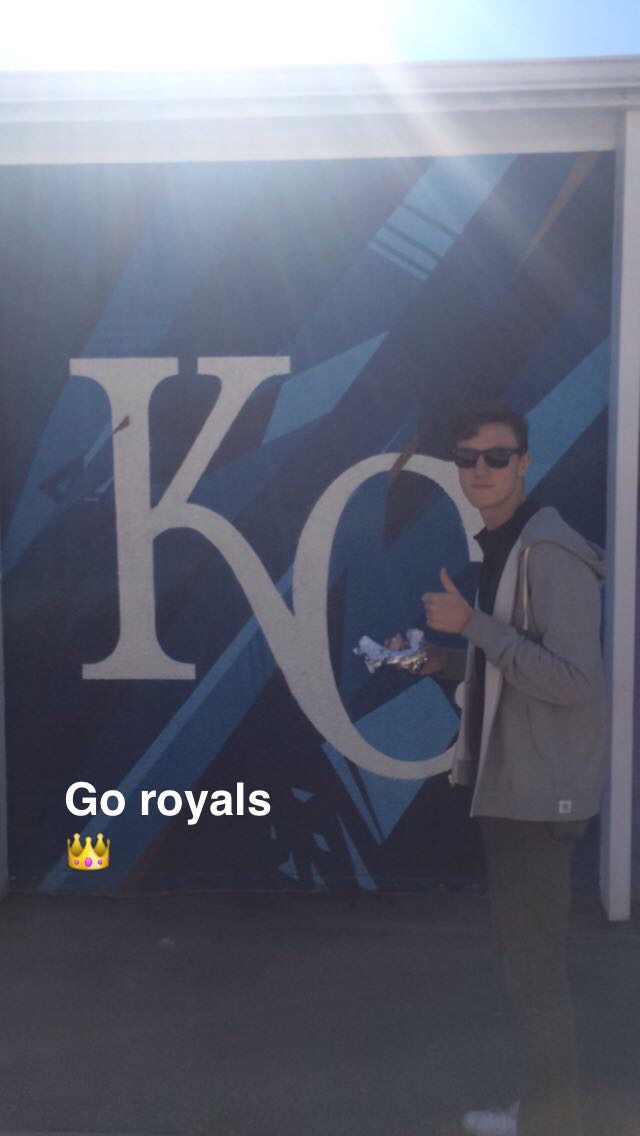 no idea what we would do but had saved $150 on housing so the world was our oyster (or maybe clam, oysters can be expensive).

Friday morning, I proposed the ALCS. Yes, theoretically it wouldn’t fit our budget, but honestly, what else would we do in Kansas City? There’s only so much BBQ you can eat in one trip. With that in mind, we knew tickets would be very, very expensive, so surfing the interwebs for some cheap seats Friday morning was a longshot. Anything under $100 was doable. All we* really needed was to be in the building.

*”We” is a strong term. My friend Andres is entirely indifferent to baseball but loves new experiences so technically he was all in.

Enter Su-Ling Wong, Vivid Seats, and the third party ticket (black?) market. The tickets might have been standing room only, Su-Ling might have raised the price halfway through the checkout process, and we definitely had to go Kinko’s to print the tickets two hours before gametime, but they scanned at the gate and we were in the door. All in all, while over budget, $101 is a pretty good deal for day-of tickets to one of the biggest games in baseball. Plus, we could always save money on parking.

Except that we couldn’t. One unique feature of Kauffman stadium is that everyone pays a toll to park around the stadium. Because the Chief’s stadium is built directly next to Kauffman, the two teams share a massive amount of parking. Thus, there are no options but the $25 vast expanse of painted concrete. We parked on a grassy hill anyway. (Side note: there was absolutely no traffic getting into Kauffman, which was a foreign experience for me. Perks of building the field in the middle of nowhere, I guess.) 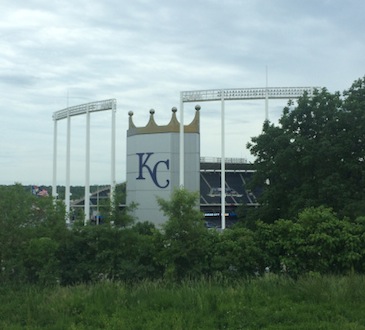 *Image taken by Jason Lawrence in May 2015

Part of the exorbitant ticket prices for playoff games is understood to be the charged atmosphere–something I had heard Royals’ fans were famous for. Walking into the stadium, a sea of blue greeted us as about 97% of fans were wearing some sort of Royals’ attire (the other 3% Blue Jays fans). Yet, there was a definite lack of energy. The air stagnated around the stadium, anticipation latent for the time. 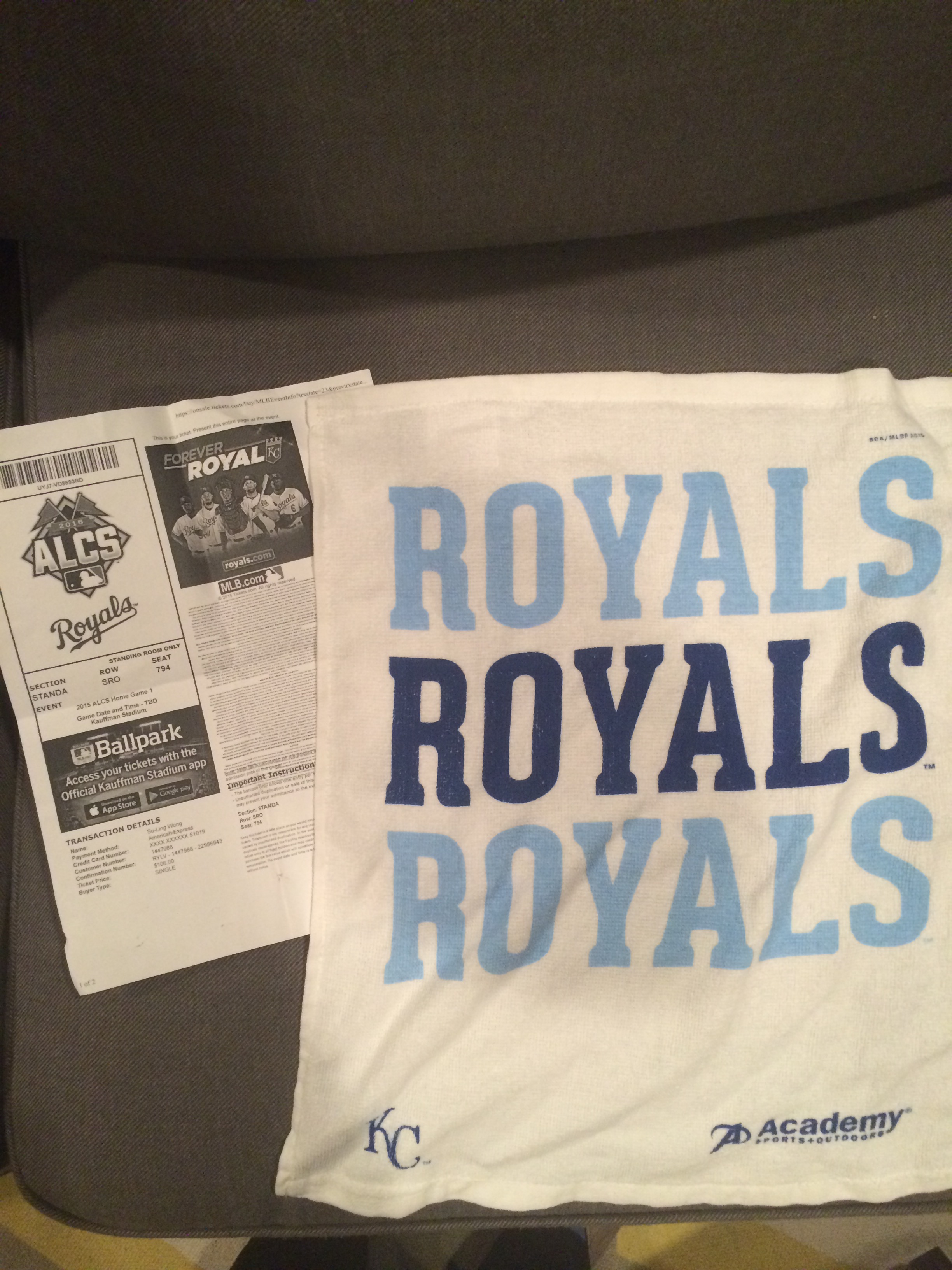 Then, Mike Phillips–saxophonist and curiously the only non-athlete part of the Jordan brand–performed the National Anthem. Phillip’s effort was punctuated by a flyover, but not your traditional flyover. No, the Royals hired a B-2 Spirit Bomber. Absolute silence filled the space until the stealth aircraft appeared over centerfield, turned vertical with the moon, and then dissipated back into the dawning night. When I say you couldn’t hear the bomber until it was directly above you, I’m not exaggerating. With that, the dozing fanbase erupted, towels spinning and “Let’s Go Royals” ringing across the Missouri hills.

Which brings us back to Edison Volquez starting the opening game of the ALCS not four years after he was an absolute disaster for the Reds. Unlike in Cincinnati, Royals’ fans adore him. Chants of “Edi Edi Edi” spontaneously erupted throughout the game, hitting an apex in the sixth when he labored to escape the inning unscathed. I had never seen an entire fanbase more engrossed in the action of a baseball game than in the sixth Friday night.

Other former Reds kept popping up throughout the night . Johnny Cueto entered in the fans’ conversation beside us. Edwin Encarnacion DH’d for the Jays to little success. Even Ryan Madson made an appearance, which is more than can be said of his Reds’ career. 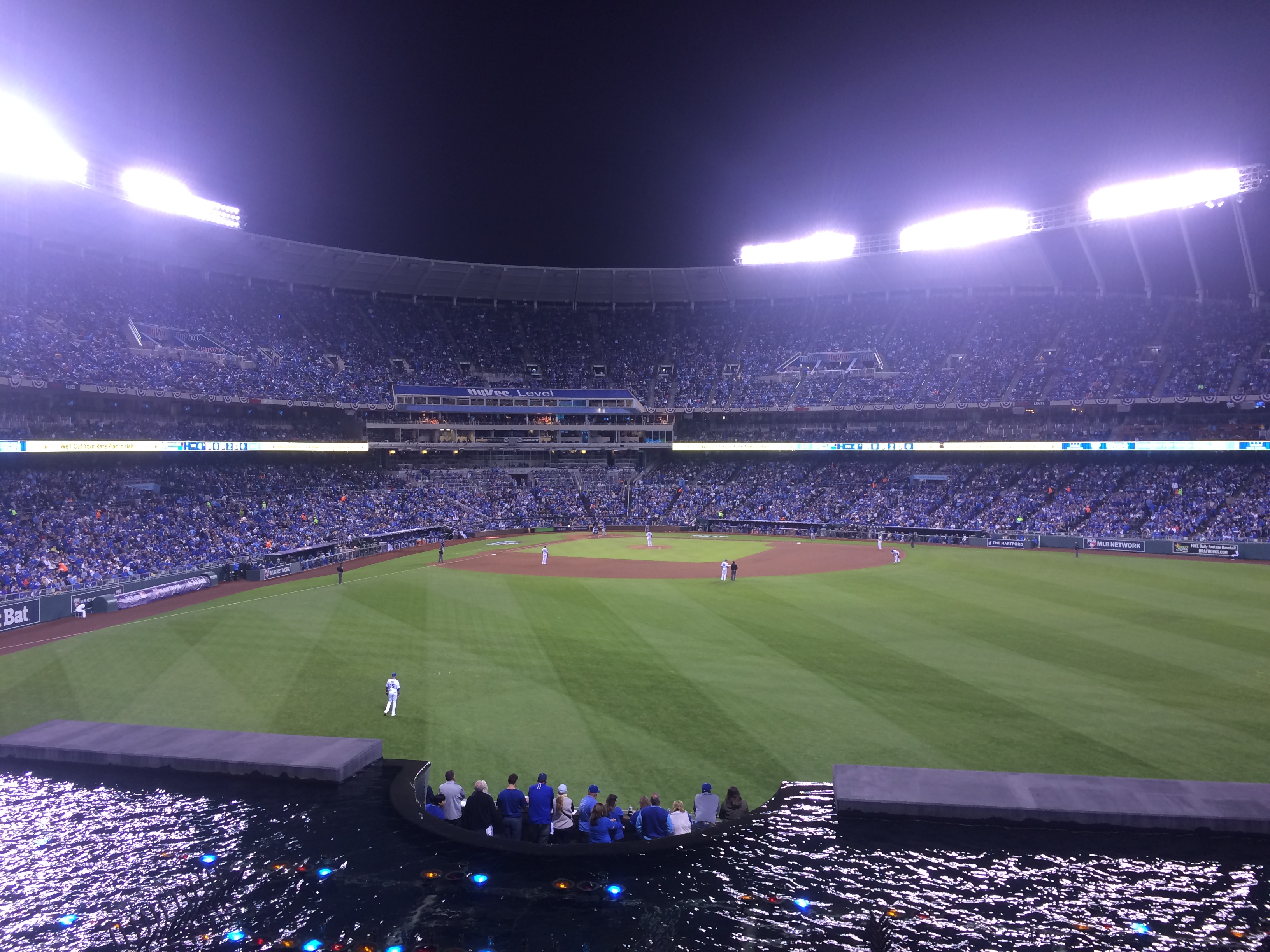 Before the game Friday night, Andres and I learned the Kansas City has more working fountains than Rome. That most of the fountains’ water has been dyed blue goes to show how fanatical this city is.

We stood behind the renowned fountains of Kauffman, hanging over the rail with a perfect view of the action (albeit blocked by a wall of water between innings). My annoyance at not being able to see the scoreboard was placated by mingling with the other standing room only dwellers. There’s just a specific type of person that deigns to stand for the duration of a three-hour game. For reference, a man with a pair of moose antlers wandered through the section, posing for pictures and bellowing “Mooooooose” whenever Mike Moustakas came up.

The Royals’ fans may be known for their dedication to their team, but after Friday night, I learned that hospitality to opposing teams is not among their strengths. Boos cascaded any time Jose Bautista came to the plate, and a fan to our left held a sign that read, “The only trash on this field are the Jays’ players.” In front of where we stood, a smallish Royals’ fan continually tried to fight a contingency of rather stocky Jays’ fans to our right, but the other Royals’ fans between us and them held him back, probably for his own safety.

As for the actual game action, the only thing of note is that my friend Andres may be the new SungWoo Lee. Before Sal Perez launched his fifth inning solo shot, Andres turned to me to say, “Oh, we’ve got a banger. Watch this. Look how he picked up his left foot, he’s gonna hit a homer.” One pitch later, it happened.

In the eighth, before Alex Gordon’s at-bat, Andres asked, “Odds he hits a home run? I think he’s gonna do it.” Gordon only ended up with a double, but it did scream off the wall but six inches from the top, and that was enough to convince me that Andres is a mystical being.

During the game, we tried no food, we bought no souvenir cups, and we neverÃ‚Â  sat down. It was very much a game removed from the usual trappings of today’s professional baseball. In a way, it was beautiful. We were outsiders just observing a ritual vital to this city. Maybe it’s a new ritual–one brought back after a 20 year disappearance–but it’s a ritual that’s been so fully embraced.

After Luke Hochevar recorded the capstone out for the Royals’ 5-0 Game 1 win, the mascot sprinted onto the field with flag in hand as the fans made their way towards the exit. On our way out, we met two grown, bearded men wearing cat onesies. With two dead phones and no way to know how to get back to Wesley’s apartment, our night faded out to the tune of ecstatic fans chanting with whatever they had left. 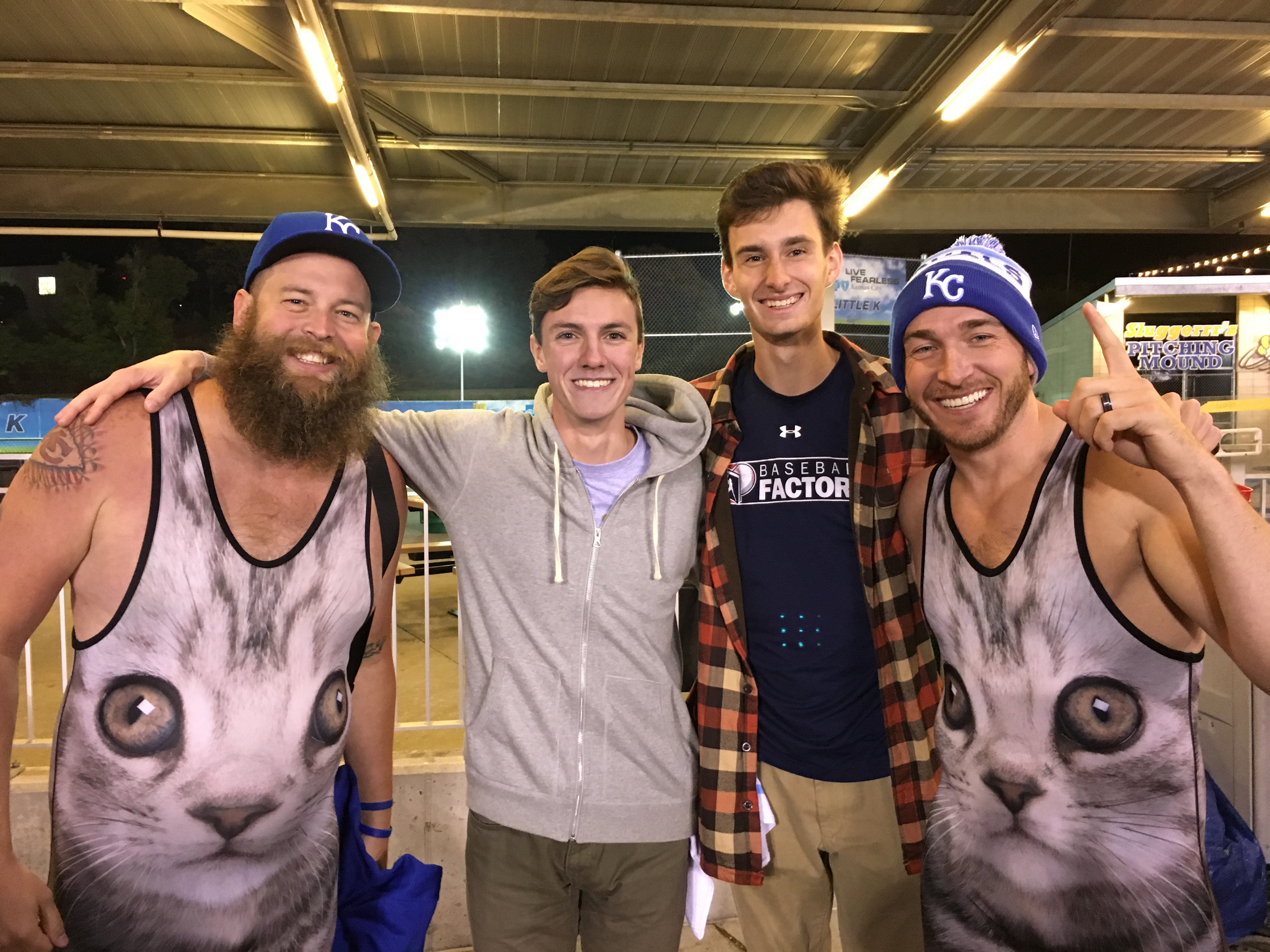