Their roster resilience in face of adversity is no accident. It is the product of a player evaluation system put in place more than a decade ago and refined over time by people at the cutting-edge of their industry.

It began in 2003. The Cardinals hired Jeff Luhnow, who had degrees in economics and engineering from Penn and a masterÃ¢â‚¬â„¢s degree in business administration from Northwestern. Note the absence of the word baseball in that resume.

The Cardinals assigned Luhnow the task of developing a new data methodology the team could use for scouting, evaluating and projecting talent. He started by hiring a NASA engineer and biomathematician, Sig Mejdal, to help him devise a system that could assimilate all the available information.

The Cardinals’ player evaluation program was one of the first that combined scouting information and statistical analysis. The system has evolved into one of the most sophisticated in the business, with proprietary algorithms (using neural nets and other artificial intelligence technology) that determine the value for each player.

Luhnow, who now works for the Houston Astros, recently offered a hypothetical example of how it works:

Ã¢â‚¬Å“LetÃ¢â‚¬â„¢s say the player has played two summers in a wood-bat league. HeÃ¢â‚¬â„¢s got hundreds of Division I at-bats with a composite bat but against a wide variety of competition. YouÃ¢â‚¬â„¢ve got scoutsÃ¢â‚¬â„¢ input on his potential. Your video analyst says his swing is in the top quartile of swings heÃ¢â‚¬â„¢s seen that lead to success in the major leagues. Your area scout says his character is in the top 10 percent of players. But heÃ¢â‚¬â„¢s a C-minus student. Not academic, doesnÃ¢â‚¬â„¢t learn well. Your doctor says heÃ¢â‚¬â„¢s got a slightly above-average risk of sustaining an injury. IÃ¢â‚¬â„¢ve just given you nine pieces of information. How do you weight them? I canÃ¢â‚¬â„¢t do that in my mind. ItÃ¢â‚¬â„¢s overload for any human being. But we have a thousand players on the draft board weÃ¢â‚¬â„¢re trying to rank in order.Ã¢â‚¬Â

The player evaluation program takes all these variables into account and weights them according to the values determined by front office brainpower.

The Cardinals have been doing this for a while. Their advanced analytical process has allowed them to mine the later rounds of the draft with unusual hit rates. They believe their statistical approach can understand performance levels at smaller colleges, for example, and uncover talent there.

Their analytic evaluation methods also suggested they focus on pitchers with more athleticism and big arms. By 2009, they were acquiring Miller, Wacha, Rosenthal, Carlos Martinez and Siegrist.

And while they donÃ¢â‚¬â„¢t participate in the free agent market as much as they did under the previous regime, the Cardinals have been successful with their few signings like Carlos Beltran, Matt Holliday and Jhonny Peralta. They traded for Grichuk and Jason Heyward.

So how did all this start?

It began at the insistence of a data-driven owner.

Bill DeWitt, Jr. lives in Indian Hill, a suburb of Cincinnati, where his investment capital business operates. DeWitt Jr. [pictured below] has degrees from Yale and Harvard and is a successful businessman. He also is the principle owner and managing partner of the St. Louis Cardinals. DeWitt Jr. was the principle investor in the group that bought the club from Anheuser-Busch for $150 million in 1995. 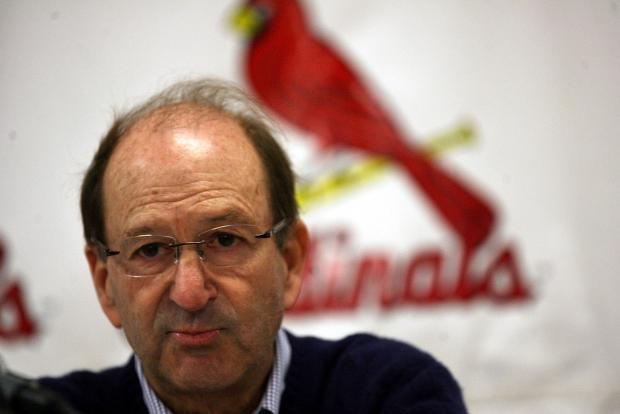 Running a major league baseball organization was in Bill DeWitt Jr.’s blood. DeWittÃ¢â‚¬â„¢s father had worked as a young man for Branch Rickey. Bill Sr. had become the general manager and owner of the Cincinnati Reds in 1961. That’s right. An NL Champions pennant with “1961” on it is displayed in Great American Ball Park. Bill DeWitt Sr. is also credited for building the farm system that produced the Big Red Machine teams.

His son, Bill DeWitt Jr., is the person most responsible for the Cardinals being the enlightened, forward-thinking, successful organization they are today.

Ã¢â‚¬Å“As time went on we had to change,” DeWitt said. “There was so much information out there. The use of metrics kept proliferating, and we werenÃ¢â‚¬â„¢t doing anything to take advantage of it to evaluate what a playerÃ¢â‚¬â„¢s true performance was Ã¢â‚¬â€ and what that meant in terms of their value.”

DeWitt embraced advanced metrics as an evaluation tool Ã¢â‚¬Â¦ in 2003 Ã¢â‚¬Â¦ the year that Moneyball was on the bestseller list, far earlier than other owners.

Ã¢â‚¬Å“Today, every aspect of the game is under analytical scrutiny. On the field. Off the field. Ã¢â‚¬Â¦ There has been a coming around to information in the last 10 to 15 years and a lot of teams were looking for that edge,Ã¢â‚¬Â said DeWitt. Ã¢â‚¬Å“I feel good that at the beginning we were able to capitalize on it.Ã¢â‚¬Â

DeWitt hired Luhnow, who he knew from business dealings, to lead the Cardinals into their sabermetric future. Keep in mind that other than playing in a fantasy baseball league, Luhnow had no direct experience with the game. DeWitt gave him the keys to the computer lab Ã¢â‚¬â€œ and the bank account.

Ã¢â‚¬Å“I wanted to make sure we were cutting-edge on all fronts and thought having someone from the outside would give us a fresh look,Ã¢â‚¬Â said DeWitt. Ã¢â‚¬Å“There was no budget. What we needed is what we did.Ã¢â‚¬Â

Ã¢â‚¬Å“There was a new frontier,Ã¢â‚¬Â said Dewitt. Ã¢â‚¬Å“If you feel good about how you look at the metric, then you have a chance to answer the question, Ã¢â‚¬ËœWhatÃ¢â‚¬â„¢s the value?Ã¢â‚¬â„¢ We all want to be at the forefront of player valuation techniques.Ã¢â‚¬Â 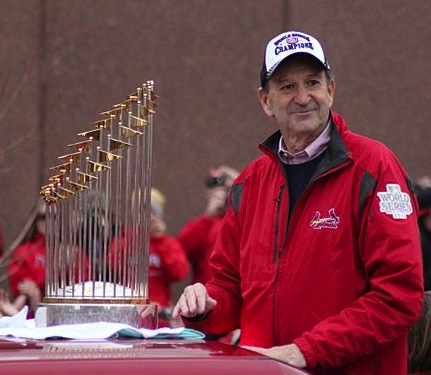 Despite the Cardinals success in the mid-2000s, Jocketty wasnÃ¢â‚¬â„¢t a good fit for Bill DeWittÃ¢â‚¬â„¢s plan to move toward more data-driven decisions. DeWitt wanted a more analytical front office and Walt Jocketty didnÃ¢â‚¬â„¢t offer that.

By 2007, JockettyÃ¢â‚¬â„¢s most successful strategy had become outdated. He had been adept at grabbing players from other clubs engaged in mid-season fire sales. But as revenues surged in baseball, along with generous revenue sharing, teams became less eager to unload salary.

The division between Luhnow and Jocketty simmered barely beneath the surface for the summer of 2007. DeWitt fired Jocketty on October 3.

John Mozeliak, who had been an assistant to Jocketty, took over as the Cardinals GM at the age of 38. One of MozeliakÃ¢â‚¬â„¢s first moves was establishing a Baseball Development department, which had not existed under Jocketty.

Mozeliak put together a team of baseball outsiders to work with the Cardinals scouts and other baseball people. His analytics department consisted of a NASA engineer, and people with degrees in business, psychology and statistics. Their product generates the 0’s and 1’s for the organizationÃ¢â‚¬â„¢s data-driven decision-making.

Ã¢â‚¬Å“WeÃ¢â‚¬â„¢re able to combine advanced stats with the ability to create a model that gives us recommendations on contracts, salary and length,Ã¢â‚¬Â Mozeliak said.

It factors in aging curves among other variables. Instead of paying players for what they have already accomplished, under Mozeliak the Cardinals pay for what they expect the players to do going forward.

On the field, Mozeliak notes that his manager, Mike Matheny and his coaches have embraced advanced-metric scouting reports. A big part of that was convincing Matheny to stop using small sample sizes for determining lineup and playing time and to accept larger samples sizes for those decisions.

The insight shows up in the standings. ItÃ¢â‚¬â„¢s Mozeliak, itÃ¢â‚¬â„¢s Matheny, it is every name on the organization chart. Ã¢â‚¬Å“Everyone in the CardinalsÃ¢â‚¬â„¢ organization is analytical,Ã¢â‚¬Â an industry insider said recently.

And all that can be traced back in a straight line to the vision and leadership of owner Bill DeWitt Jr.