Baseball puts its best teams from the regular season on full display in the postseason. This fall, the games have been as captivating and controversial as expected. Even though our favorite team isn’t participating, many of us watch the teams that are involved with great interest. We tune in not only to enjoy the excellence and drama, but also to figure out what worked for those teams. What were their keys to success: strong bullpens? solid defense? plate discipline? a dozen other theories?

And it’s not just fans and writers wondering. Front offices are busy discerning the lessons of the previous season.

No one factor explains an organization’s winning record. Making the postseason takes dedication, performance and fortune (both kinds).Ã‚Â But one other factor in 2015 stares back at every observer: It was a good year for teams that have invested in sabermetrics.

The term sabermetrics comes from the acronym SABR, which stands for the Society for Advanced Baseball Research. In short, the field of sabermetrics is the application of mathematical and statistical analysis to baseball records.

There’s nothing new about statistics in baseball. From the sport’s earliest days more than 140 years ago, baseball has kept detailed records of individual players and teams. Stat lines were featured on the back of Topps baseball cards dating back to 1952. But, the sabermetrics revolution moved us from counting and describing to understanding, explaining and, most importantly, predicting.

Every baseball front office now has employees dedicated to collecting, structuring and analyzing data about player performances. Just as some organizations are more serious about coordinating their minor leagues than others, there is variation in how much they value data analysis. Analytics departments range in size from a couple stats people to a Greek phalanx of PhDs in computer science, statistics, economics, mathematics and operations research. Hardware matters, too. Teams can use high-performing computing platforms to make sense of the non-stop gusher of data they’re receiving about players and games.

Even after all of that brainpower and infrastructure is assembled, teams still have to put the data to effect. Organizations have to develop insights and translate that to their draft rooms, development plans, dugouts and playing fields. World-class analytics are useless if the team’s gatekeepers – general manager or manager – won’t change old habits.

That leads to an important question: How do the various MLB teams compare in their use of sabermetrics?

Categorizing the seriousness with which a major league team approaches analytics is an imprecise practice, to be sure. But careful methodologies and measurements can provide estimates that reveal meaningful differences. It doesn’t take an advanced degree in machine learning to know the Dodgers and Phillies belong in opposite categories.

Ben Baumer worked in the New York Mets organization as a statistical analyst for eight seasons. HeÃ¢â‚¬â„¢s now a professor of statistics at Smith College. ESPN tasked Baumer with the job of categorizing every major league baseball team in terms of how much they use sabermetrics.Ã‚Â Baumer was the right person for this assignment. He and colleague Andrew Zimbalist have co-authored the book on this topic.Ã‚Â The Sabermetric Revolution: Assessing the Growth of Analytics in Baseball was published in hardcover in late 2013.

This past February, Baumer ranked all 30 major league clubs. The criteria were: (1) the strength of each franchiseÃ¢â‚¬â„¢s analytics staff, (2) the clubÃ¢â‚¬â„¢s buy-in from executives and coaches, (3) the teamÃ¢â‚¬â„¢s investment in biometric data, and (4) how much the organizationÃ¢â‚¬â„¢s approach is predicated on analytics.

Baumer’s findings led him to create five categories: All-In, Believers, One Foot In, Skeptics and Nonbelievers.Ã‚Â Here are the teams in each category, alphabetical order, according to Baumer’s research:

Before we start analyzing how these organizations performed this year, it’sÃ‚Â noteworthy that more than half of major league organizations now fall into one of the top two categories, rock solid in their buy-in and implementation of sabermetrics. Only eight clubs are at the other end.

How did organizations in each of those categories do this year?

The results are stark. On average, teams that were aggressive about the use of sabermetrics had much better seasons than did teams categorized as skeptics or nonbelievers. Let’s look at the bottom line of wins and losses: 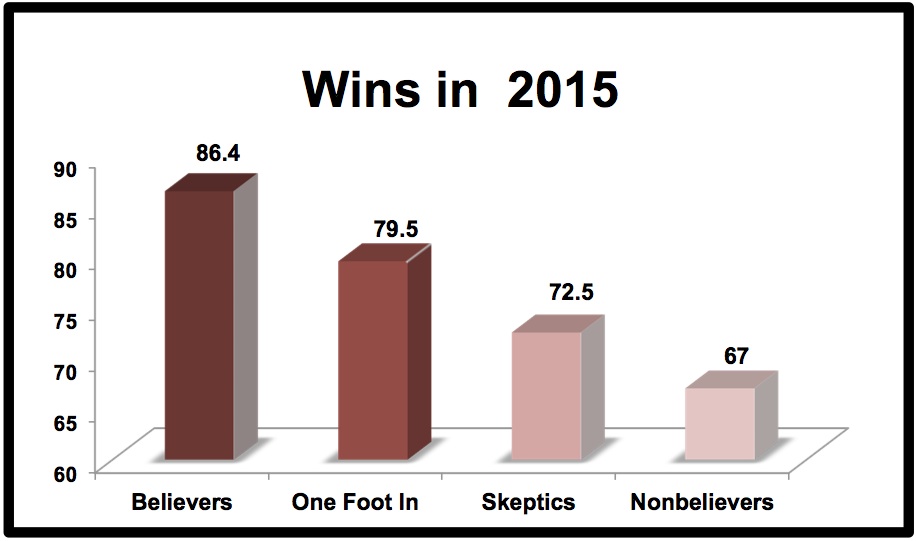 The 16 teams Baumer ranked in the top two categories, All-In and Believers (grouped here as Believers) won an average of 86.4 games. The One Foot In teams won 79.5 games. The Skeptics (72.5 wins) and Nonbelievers (67 wins) lagged behind.

In terms of qualifying for the postseason, 9 of the 10 teams who either won their division or were a wild card, were in the All-In and Believers categories. The one remaining postseason team (Texas) fell in the One Foot In category. 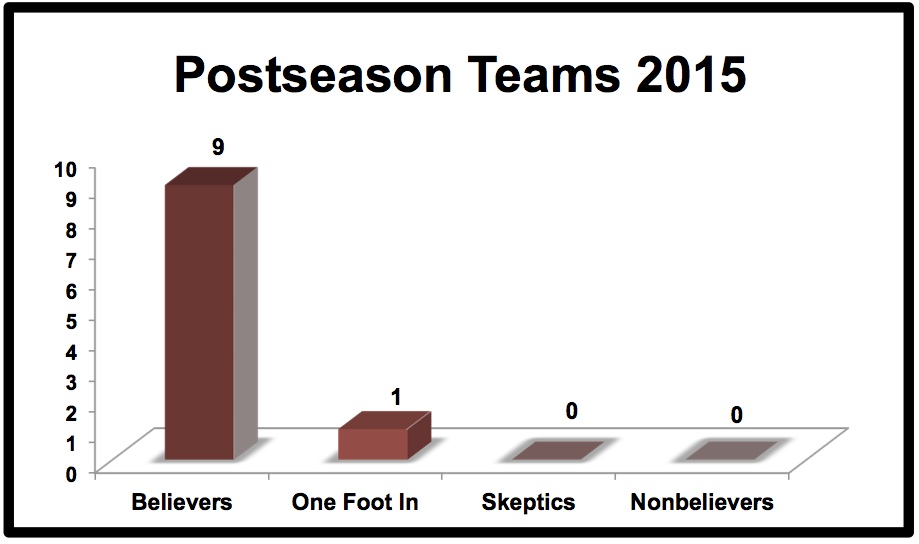 Not a single team from the Skeptics or Nonbelievers category made the postseason in 2015.

Caveats noted: Only one season of data, only one estimate of the sabermetric friendliness of each organization and lines between the categories are blurry.

Even with those qualifiers, itÃ¢â‚¬â„¢s hard to ignore the conclusion that teams placing more emphasis on analytics, on average, did better. And that the results aren’t a coincidence.

Going forward, that doesnÃ¢â‚¬â„¢t mean every team in the top two categories will be successful and every team in the bottom two categories preordained to be awful. Plenty of variables other than the use of analytics are important. Traditional teams can win and advanced teams can lose. But sub-par use of analytics appears to function as a strong headwind for an organization to overcome.

Data architecture isn’t destiny. But it appears that ignorance born from resistance to change is.