On average, how many games do you need to attend before you see a stolen base? It seems like Billy Hamilton steals a few every night, so for Reds fans, the stolen base is about as sure of a bet as Pete Rose. Yet if you look closely, the stolen base is slowly fading from the game: this year there will be the fewest stolen bases per game since 2005. In 2015, if you randomly attended a game, there is about a one in twenty five chance you will see a successful stolen base. What is driving this decline in thievery? Are players getting slower? A newfound morality regarding the sanctity of the base progression? Tighter pants?

From fangraphs, it is fairly easy to show the decline in stolen bases per game. Here are the number for the last fifteen years:

Graphically, these numbers are a bit easier to digest: 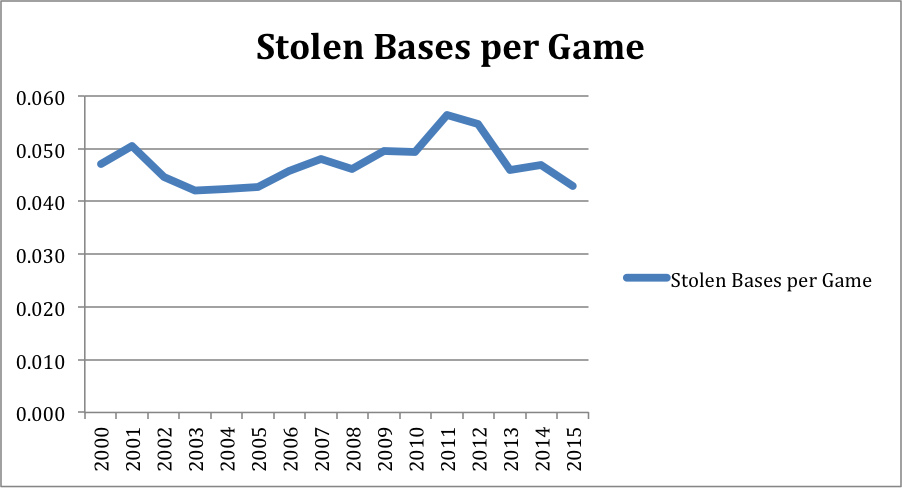 What is interesting is that teams began stealing more after the steroid era than they did before. If this trend was rationally driven it could be explained that teams did not want to risk one out for one base when they had sluggers up and down the lineup.

One common explanation for the decline in stolen bases is thatÃ‚Â analytically oriented teams don’t try to steal many bases. This argument states that prior to SABRmetric thinking, teams were both overvaluing the benefit of moving a runner one base while also downplaying the risk of that runner getting thrown out.

The run expectancy charts are brutal on stolen bases: with zero out, if a runner moves from first to second a team’s run expectancy only increases by about 0.20 runs. Yet if that team loses both a runner and creates an out, the drawback is 0.60 runs (from 0.85 to 0.25). Or put another way, teams would be no better off stealing three bases if they are thrown out once.

If a team canÃ‚Â diminish the risk of getting thrown out, then the benefit of moving up a base becomes more reasonable. Due to the small benefit of moving up but deep drop off should the runner get caught stealing mostÃ‚Â methods predict the Ã¢â‚¬Å“break evenÃ¢â‚¬Â point to be about a 75% success rate. And that’s just to get back to a point where you wouldÃ‚Â would be no better off than before.

If you are a normal reader of Redleg Nation, none of sounds especially surprising. The next thing you would expect is a distribution of stolen base percentages over the last 5 years that showsÃ‚Â teams are increasingly adopting this Ã¢â‚¬Å“break even pointÃ¢â‚¬Â and that’s explaining the drop off in stolen bases. This was supposed to be a nice, easy 500 word post for the lastÃ‚Â Friday of the year. I downloaded the data from Fangraphs.Ã‚Â And that’s when this column started getting weird.

Here is the stolen base percentage (stolen bases/[stolen bases+caught stealing]) for all teams in MLB over the past five years (grouped by year): 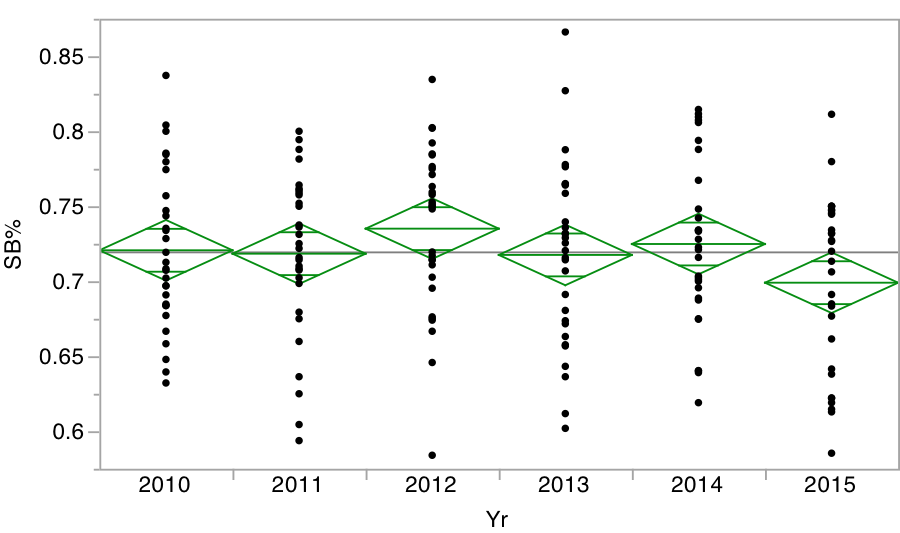 Not only has the leagueÃ‚Â never stolen at a 75% success rate, it doesn’t look like teams are making a discernible effort to become more successful than in the past. For all the talk about MLB front offices turning into computer labs, 2015 is the first time in the past five years that the stolen base percentage will fall below 70%. While for statistical reasons we cannot reject the idea that 2015 is any different than the other years, we also can’t say there is a trend in these data, either.

YetÃ‚Â maybe SABR team’s are not trying to steal that many bases. Stolen base % is declining, so these analytically-oriented front offices are keeping runners parked at first;Ã‚Â its a perfectly consistent argument. So here is the same data by team: 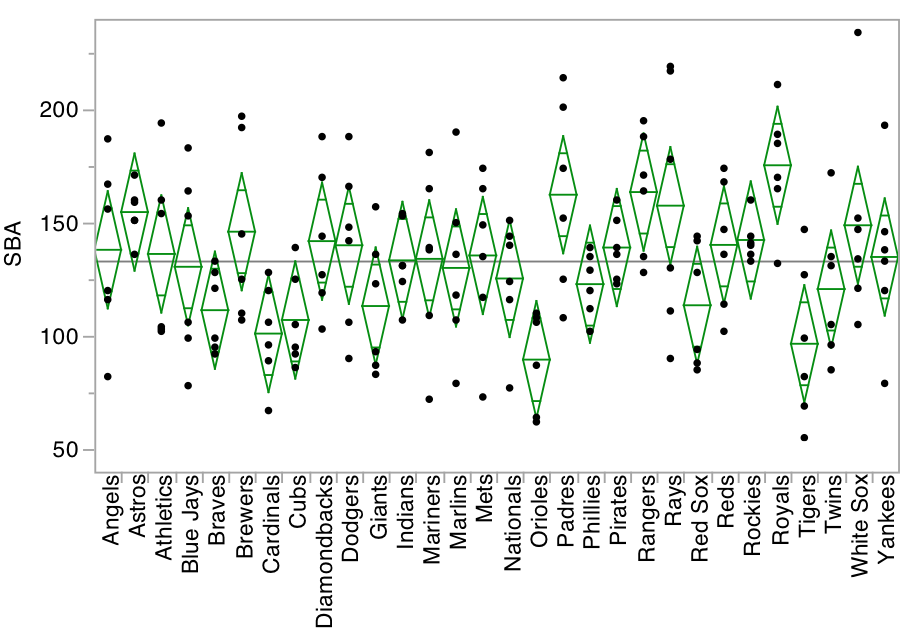 SBA is stolen base attempts, same calculation as above. Green triangles are the 95%Ã‚Â confidenceÃ‚Â interval around the mean (green horizontal line). Five years of data 2010-2015.

That’sÃ‚Â a lot of data there to digest, but the top five teams thatÃ‚Â attempt to steal the most basesÃ‚Â are: theÃ‚Â Rays, Astros, Rangers, Padres and Royals. These five teams were labeledÃ‚Â either “All in” or “Believers” when ESPN ranked the most analytically oriented baseball teams. The bottom five: the Braves, Cubs, Cardinals, O’s, and Tigers.Ã‚Â Strangely,this is a more mixed bag than the top of the charts due toÃ‚Â the Cubs and Cardinals being “All-in” on analytics while the Braves and the Tigers areÃ‚Â “skeptics”.

Keep in mind the limitations of theseÃ‚Â data: it could very well be that regardless of front office philosophy, some teams just have better base stealers than others. This is certainly true in the short run, but over a five year span, player selection and development becomes more reflective of front office ideology than it does when talent is a fixed aspect of a club. Five years might not be enough for talent to be that fluid, so this is something to keep an eye on over the next few years. Another possibilityÃ‚Â could be that some teams are just better at getting on base and therefore create moreÃ‚Â opportunities for stolen bases. I tried to control for this by adding in team OBP over this span, but this is an imperfect control becauseÃ‚Â high OBP players might be terrible base stealers (see: Dunn, Adam).

These numbers raise more questions than answers. On the one hand, it seems that analytically sophisticated teams do not steal more or less frequently thanÃ‚Â the Ã¢â‚¬Å“traditionalÃ¢â‚¬Â baseball clubs. Yet on the other hand, we see the Astros, Rays, and PadresÃ‚Â all grouped together at the top of the chart. If anything, there are more analytically oriented teams in the top half of the distribution than there are in the bottom half. This poses an alternative narrative: traditional front offices are driving the decline in stolen bases. Why? Because traditional front officesÃ‚Â have their “stolen base guys” and their “sluggers”. As the league OBP declines, “stolen base guys” get fewer opportunities to steal bases. Yet analytically oriented teams might make decisions about when the steal based off of other factors, such as ifÃ‚Â a pitcher-catcher combo hasÃ‚Â a low caught stealing percentage or the club’s ability to predict when pitchers are most likely to throw a breaking pitch.

I have no data to support this theory, but its becomingÃ‚Â increasingly unlikely we can say that the decline in stolen bases is due to ‘SABR’ front offices dropping anchor at first. The overall trend is there: stolen bases are declining andÃ‚Â we need to find a more nuanced explanation for this trend.

Rest assured Nation,Ã‚Â we knowÃ‚Â that the Reds analytically-savvy front officeÃ‚Â will soon have an answer. That is, as soon as Walt gets off the phone so they can dial into their American OnlineÃ‚Â account.