Johnny Cueto was simply awesome as a Red. He had a great career here in Cincinnati. He pitched very well this year until the moment he got traded to the Kansas City Royals. Ever since the trade Cueto has been a differentÃ‚Â pitcher. Look at his stats below to see how bad he has been. What happened?

Here are Cueto’s stats with each team this year: 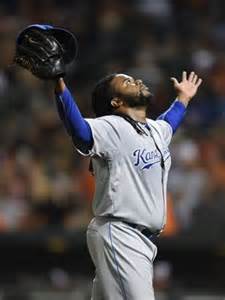 Cueto actually started out well with the Royals. His first four games were all quality starts. In his third game heÃ‚Â threw a complete game shutout against the Detroit Tigers on August 10th with 8 strikeouts and zero walks. His next start came against the Angels on August 15th and he went 8 innings allowing only one run. But then the bottom fell out. In his next five games he allowed 7 runs to the Red Sox, 6 runs to the Orioles, 4 runs to the Tigers, 5 runs to the White Sox and finally 8 runs to the Orioles. That is a bad streak unlike any he ever had in his career with the Reds.

Since that bad streak he has rattled off three consecutive quality starts and seems to have righted the ship just in time for the playoffs. I am confident that Cueto will be a boss in the postseason. The guy is just too good to struggle for long. After all I ranked him as the third best pitcher the Reds have ever had in their long history.

We can see here that Cueto’s strikeout rate has dropped significantly with the Royals. That is a big problem because we know that strikeouts and walks are the most important factors for the long term success of pitchers. The good news is that Cueto’s already excellent walk rate has gotten even better with the move to Kansas City. I have said many times that I believe K-BB% is the most important stat for evaluating pitchers. Good pitchers almost always have high scores in this stat and bad pitchers almost always have low scores in this stat (12% is league average), there are very few pitchers who can defy this stat for any length of time. Cueto’s K-BB% has fallen a good bit but is still better than average. Given his long history of excellence there is every reason to believe that Johnny will quickly improve on this metric in the near future. He was at 18.4% last year.

This chart shows the so-called “luck stats” that are mostly out of a pitcher’s control. Many observers around the league predicted that Cueto’s ERA would improve after the tradeÃ‚Â because he would get the benefit of the Royals’ great defense. What those people didn’t know is the Reds also have a great defense. The last few years the Reds have ranked at or near the top of the leaderboards in every defensive metric. Yes, the Royals have a great defense, but so do the Reds — at least they did when Cueto was here. The Reds’ defensive numbers have taken a tumble in the 2nd half this year since Zack Cozart and Billy Hamilton have been out of action (with Cozart being replaced by the brutal defenseÃ‚Â of Eugenio Suarez).

The numbers in the chart show that the Royals’ defense has not done Cueto any favors. His BABIP has jumped more than 100 points since switching teams. League average BABIP is .295.Ã‚Â Not only that, his Left On Base % has fallen way down as well. League average LOB% is 72%. Pitchers have some control over how many fly balls they allow, but they have very little to no control over how many home runs per fly ball they allow on average (10% is average). We see above that Cueto’s home runs per fly ball have increased despite moving from a homer-friendly ballpark in Cincinnati to a home run averse ballpark in Kansas City (although Kauffman Stadium is not nearly as pitcher-friendly as it’s reputation asserts).

As a group, the stats in the above chart show that Cueto has been very unlucky in his Royals tenure. This explains a large chunk of his ERA spike during that period. These stats should return to his career rates as time goes by (or “regress to the mean” in math-speak). So I don’t think Cueto’s poor stats as a Royal are due to a degradation of his actual pitching ability. He has just gone through a period of wacky luck.

Cueto’s fastball velocity remains the same, which is a strong indication that he is not injured. It also shows his mechanics have not fallen out of whack. Either of those issues would manifest in reduced velocity.

These stats are improvements on ERA that focus solely on aspects of run prevention that are controlled by the pitcher. Sometimes called Defense Independent Metrics, these stats eliminate the effects of defensive players, ballpark and league to more accurately portrayÃ‚Â the performance of the pitcher. They do a much better job of predicting future performance than ERA does. I believe the stats get better as you go down the chart.

We can see that Cueto’s Reds/Royals differential is most glaring in the ERA stat where he saw it climb from 2.62 to 4.99 for a difference of 2.37 runs per game. When you strip out the external factors like defense and luckÃ‚Â you can see that the differential is much smaller. The FIP differs by only .74 runs per game. xFIP differs by only .46 runs per game and SIERA differs by only .59 runs per game. Looking at these stats lets us see that Cueto’s actual pitching performance fell a little bit but did not drop off a cliff like his ERA makes it seem. That should make Royals fans feel better about their chances in the playoffs because Cueto has pitched much better than his 4.99 ERA indicates. (By the way, league average is 3.75 in all the stats in that chart).

I think Johnny Cueto will be just fine the rest of this season and for the next few years if he stays healthy. I seriously doubt the Reds will make a genuineÃ‚Â attempt to sign Cueto to a free agent contract this winter, but hisÃ‚Â high ERA since leaving the Reds will probably make his price quite a bit lower than it would have been. He will still make a TON of money, but this cold streak in terms of ERA will definitely cost him some cash. It’s a bummer for him but provides a nice buying opportunity for a rich team like the Dodgers, Red Sox or Yankees.