The Cincinnati Reds (63-94) will look to end their 10-game losing streak on Wednesday night against the Chicago Cubs (92-65). The Cubs won the opening game of the series 4-1 last night. The Reds offense has collected just six hits in the last two games.

Anthony DeSclafani will make his final start for what has been a terrific 2015 season for the Reds. It is impressive enough that DeSclafani will make 31 starts and log over 180 innings in his first full season in the big leagues, but the fact that he has accomplished that while putting up an above average ERA and FIP is very impressive. DeSclafani will certainly be in the top of the Reds rotation in 2016.

DeSclafani has been great for the season, but his last two starts have not been so great (10.2 IP, 17 H, 9 ER). Even in his recent struggles over his last two starts, he still didn’t walk a batter in either start, and only allowed 1 HR. Disco would certainly love to finish 2015 on a high note against a division rival.

Jon Lester has turned a tough start to 2015 into a very good season. Lester had a 6.23 ERA in April, but has got that all the way down to 3.43. Lester did have a 2.22 FIP in April, which shows that he was likely just more unlucky than anything else. 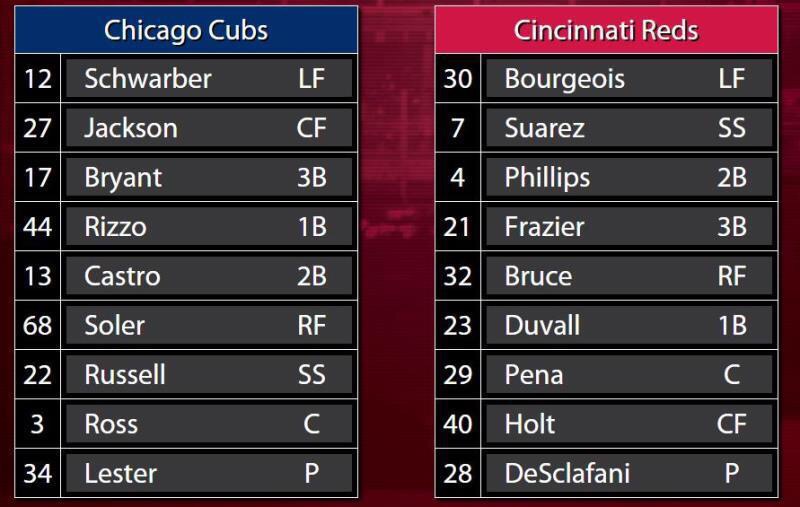 Joey Votto went 0 for 3 through his first three trips to the plate last night, and his streak was in serious jeopardy. Votto got one more shot in the bottom of the ninth, and he walked on four pitches. That extended Votto’s on-base streak to 46 games. Votto is now just 2 games shy of tying Pete Rose’s Reds record of 48 consecutive games on base.

Votto appeared to have been bothered by some sort of minor injury last night. Reds broadcaster Jeff Brantley had this to say about it: Ã¢â‚¬Å“Votto may have tweaked back or spasm. ItÃ¢â‚¬â„¢s just a very uncomfortable swing right now. Something is going on with Votto thatÃ¢â‚¬â„¢s not normal.” Reds manager Bryan Price said after the game that Ã¢â‚¬Å“He’s got a little muscular stuff in the back of the shoulder. ItÃ¢â‚¬â„¢s something heÃ¢â‚¬â„¢s dealt with before. He wants to play” John Fay reported that Votto said “I’m fine” when asked about an injury.

Here are some more Votto numbers:

1. Most times on base in a season in Reds history: 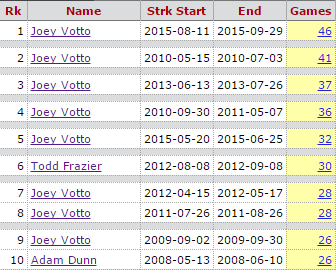 3. Votto’s 46 game on-base streak is tied with Matt Holliday (2014) and Michael Cuddyer (2013). If Votto reaches base tonight, he would have the longest streak in the MLB since Kevin Millar (Red Sox) reached base in 52 consecutive games in 2007.

Things are heating up in the AL West and AL Wild Card races. Here are the standings with five days left in the season.

Also, I know we are supposed to hate the Cardinals, and I do my fair share of that. However, you have to applaud Adam Wainwright. He was activated today for the Cardinals, and will be used in the bullpen for the rest of the season and the postseason. Wainwright was supposed to miss the entire season with a torn Achilles, but he has made a miraculous recover to pitch gain in 2015.